(Minghui.org) Today's news from China includes incidents of persecution that took place in 19 cities or counties in 10 provinces. According to this report, 3 Falun Gong practitioners were subjected to mistreatment during their detention, and at least 31 practitioners were illegally arrested, detained, and imprisoned. 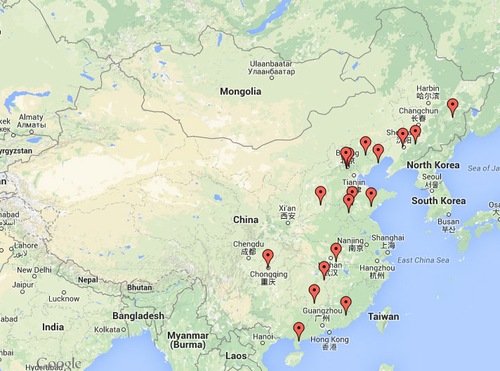 Mr. Lei Jingxiong from Shiqiao Township was arrested and taken to Guiyang Prison on February 15, 2015. He was transferred to Wangling Prison in You County, Zhuzhou City, on April 23.

Ms. Yang Xiaohui, her non-practitioner husband Mr. Fei Cheng, and three other practitioners, who were visiting them were arrested and taken to the Neicheng Police Station by officers from the Leizhou City 610 Office and the Domestic Security Division on the afternoon of April 24, 2015.

The officers ransacked the couple's home and confiscated 21,400 yuan in cash, a gold ring from Mr. Fei's bag, informational materials and DVDs about the persecution of Falun Gong (also known as Falun Dafa), and dozens of cell phones used to call people and tell them about the persecution.

Mr. Fei was released the next morning. Ms. Yang was taken to the Leizhou City Detention Center that afternoon. Three other practitioners were taken to the Zhanjiang City Brainwashing Center.

This is the fourth time Ms. Chen, 62, has been arrested. The second time she was held in the Zhanjiang Drug Rehabilitation Center.

Mr. Chen Weifeng, Mr. Chi Lingxin, Ms. Lin Lianghua, a practitioner with the last name Wang, and another practitioner were arrested on April 24, 2015. Officers from the Zhucheng City Domestic Security Division arrested them when the practitioners were hanging up banners about Falun Gong.

Ms. Zhao Shifang and Mr. Zhou Changsen will be tried for the second time on the afternoon of April 27, 2015.

Ms. Gao Yuqin was taken to the Heilongjiang Province Women's Prison on April 15, 2015. She is being denied family visits.

Ms. Cao Lianxiang was officially placed under arrest on April 20, 2015.

Ms. Liu Shuliang, in her 40s, was arrested by officers from the Huangshigang Police Station. She was telling people about Falun Gong and distributing Falun Gong informational materials and Shen Yun DVDs on the morning of April 26, 2015. No one knows where she is being held.

Mr. Ren Peitu, 58, was arrested on the morning of April 26, 2015, by Yangshuling Town Police Station officers for distributing Shen Yun DVDs. That afternoon a person who claimed to be an officer with the Pingquan County Domestic Security Division called Mr. Ren's family from phone number +86-314-7648475. The person told the family that Mr. Ren was taken to a detention center.

A man grabbed Ms. Lian Guixiang when she gave him a Shen Yun DVD on the afternoon of April 25, 2015. The man called the police, who arrested Ms. Liu and took her to the Huaichuan Police Station.

That evening, police officers broke into Ms. Yan Donglian's home and arrested her in the Post and Telecommunications dormitory. Both practitioners are still in custody.

Ms. Liu Aizhen, about 62, from Dongzhuang Village, Dawenkou Town, the Daiyue District, and Ms. Hou Qingfang, 63, from the Mazhuang Town in the Daiyue District were arrested on April 25, 2015, for distributing Falun Gong informational materials.

Mr. Zhang Fuxin, about 50, and his son Mr. Hou Mingming, 27, who has disabilities, were arrested by police officers who broke into their home on the morning of April 26, 2015.

Ms. Ran Yuexie, nearly 70, from the Fengtai District was taken to a brainwashing center on April 24, 2015. The center is located in the guest house of the General Logistics Department on No. 63 South Xisihuan Road in the Beidadi area, Fengtai District. Prior to this, her family was harassed for months.

Ms. Geng Fenglan, in her 70s, from Houzhuang Village, Liangxiang Township, the Fangshan District, was reported to the police and arrested on the afternoon of April 25, 2015, for telling people about Falun Gong. She is now being held in the Doudian Police Station.

Four or five unidentified plainclothes officers broke into Ms. Zhang Shuxiang's home in Xibalizhuang in the Haidian District and arrested her around April 23, 2015. They confiscated two computers, a printer, and Falun Dafa books.

Ms. Chen Xinzhu and another practitioner with the last name of Wang were also arrested that day and in the same neighborhood by officers from the Enjizhuang Police Station in the Haidian District.

Ms. Zhang was released because of high blood pressure. Ms. Chen was transferred to the Haidian District Detention Center within 24 hours. Practitioner Wang's whereabouts are unknown.

The Rencheng District Court sentenced Ms. Zhao Min to three and a half years in prison on March 12, 2015. She has appealed, and her case was transferred to Jining City Intermediate Court.

Mr. Ye Guanghui is being held in the Fuda Detention Center.

Shortly after going out, Ms. Zhang Shouhui, Ms. Xu Ping, Ms. Jin Fengzhi, and two other practitioners were arrested by Peng Yue and other officers from the Fushun State Security Department and the Domestic Security Division on the evening of April 24, 2015. The officers ransacked Ms. Zhang's home at 1 a.m. that night. They confiscated a computer, Falun Dafa books, and more than 1,000 yuan in cash.

Ms. Pei Zhihua from Xidianzi Town was sentenced to eight years in prison in 2008. She has been held in the Liaoning Women's Prison. Ms. Pei is in serious condition. Her blood pressure has risen to 260, and she has also developed symptoms of diabetes. It was learned recently that the person in charge of the No. 1 Ward wanted to release her on medical parole.

Ms. Zhang Yuqin, 68, was arrested on April 23, 2015, for telling others about Falun Gong. She is being held in a detention center in the suburbs.

Three women from Dazhu County are still in detention following their arrests earlier this year for telling people about the persecution of Falun Gong. Ms. Luo Yubi, 70; Ms. Chen Lingru, 73; and Ms. Huang Chuanyu, 72, will be placed on trial soon.

Ms. Tu Yuchun, 61, is in declining health after more than seven months of detention. She has been diagnosed with high blood pressure, irregular heartbeat, and diabetes, but Lanzhou City No.1 Detention Center refuses to release her on medical parole.

Ms. Wang Hongxia has been on a hunger strike for a month in Sichuan Women's Prison. The English teacher from Anyue County, Sichuan Province, was sentenced to a 12-year term for her belief in Falun Gong. According to witnesses, she has become extremely emaciated, and prison officials are not allowing her family to visit her.