(Minghui.org) The April 25 peaceful protest by ten thousand Falun Gong practitioners in Beijing 1999 was broadly reported by media around the world. For most people living outside of China, it was the first time they had heard about Falun Gong. The protest profoundly influenced many people, and became a turning point in their lives. They became curious about Falun Gong, reached out to learn about it, and many eventually started practicing Falun Gong. 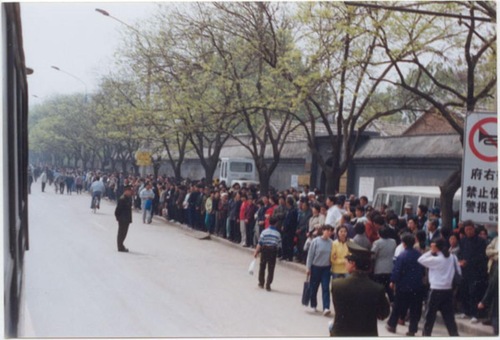 Peaceful protest at the Appeals Office in Beijing on April 25, 1999

There are currently 500 thousand Falun Gong practitioners in Taiwan, many of which began Falun Gong cultivation practice after the April 25 peaceful protest. In this article, we relate the stories of four of these practitioners. 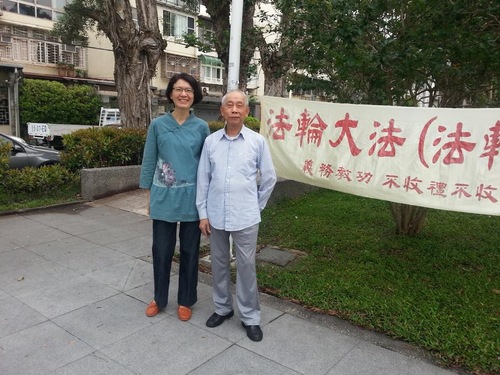 Ms. Li Youjun and her husband

Ms. Li Youjun obtained her MBA degree in London, and had a successful career in finance. She and her husband, who was a high-ranking industrial finance manager, lived a happy family life. But severe shoulder pain had always bothered her. After trying many therapies and a variety of exercises, Ms. Li had little hope that the pain would ever subside.

Ms. Li saw a TV report about the April 25 protest in May 1999. The peacefulness of the protest amazed her. “It seems that the protesters are from all walks of life. But they are so quiet. After leaving, they left no trash on the ground. They even picked up the cigarette butts tossed by the police officers.”

“What is Falun Gong? Who is their teacher? What kind of teaching can make people so peaceful?” Ms. Li wanted to know more about the practice, but she didn't know where to start.

In October 2000, a chance presented itself. A colleague of hers invited a few Falun Gong practitioners to teach the exercises at her company. Ms. Li was very happy and joined them every day at noon.

Two months later, her mother suddenly asked her, “Why haven't we heard you complaining about your shoulder pain recently?” Ms. Li then realized that the pain had disappeared after she began practicing the Falun Gong exercises every day.

Ms. Li was also amazed by the Falun Gong teachings. “Sometimes, I am bothered by the business, and the affairs in the company. But I found that reading Zhuan Falun, the main book of Falun Gong, calms me down. The book gives me wisdom to deal with the problems. I was amazed, and read all the Falun Gong books, one after the other. I found true happiness.”

Ms. Li was a sharp person with tough tones. After beginning Falun Gong cultivation practice, she tried to follow the teachings of “Truthfulness-Compassion-Forbearance,” and constrain her speech. In daily life, she tries to treat people with compassion, and always consider others' feelings.

She also found that she was no longer affected by the difficulties at work. Her mind was freed. “Practicing Falun Gong is the best thing that ever happened to me,” she said. 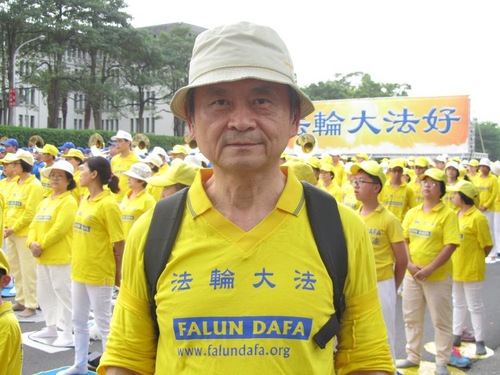 Mr. Li Guoqin and his wife are both engineers at a state-run company. He was not satisfied by high income and happy family life, for he had not found the answer to the question—what is the purpose of life? He had tried different cultivation schools for more than ten years, but had only become more confused.

The TV report on the April 25 protest peaked his curiosity. He searched for Falun Gong on the Internet, and in May 1999 found a copy of the book Zhuan Falun in a local bookstore. Many of his questions were answered by the book. He bought all the Falun Gong books, and read them non-stop.

“This is an extremely high-level cultivation practice,” Mr. Li thought to himself, “It is very rare. I am so lucky find it.” He started practicing without hesitation. He also told his sister about what he found, and his sister also became a practitioner.

A Life Free of Pain and Worries 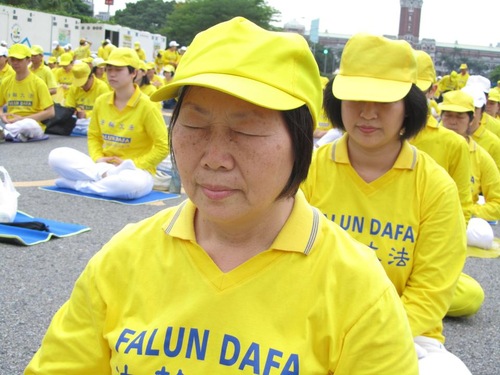 Ms. Chen Xiuyu had lived a tough life. Her husband was addicted to gambling, so not only did she have to take care of the family, she also had to make money to pay her husband's gambling debts. The heavy labor and miserable life resulted in her developing a variety of diseases. After her sons grew up, she got divorced.

She had a car accident in summer 1999. She was severely injured, and was had still not recovered after six months. A friend of hers told her about Falun Gong, which reminded her of the TV report about the protest that she had seen a month prior.

She spent a week learning about what Falun Gong really is, and decided to join her friend.

“I found that I became healthier very soon after I started practicing. Many diseases that had bothered me for more than two decades, including rhinitis, urethritis, and arthritis, disappeared without treatment.”

Ms. Chen's heart was also lightened. She now lives happily with her children and grandchildren. She no longer hates her ex-husband. She talked to him about Falun Gong, and invited him to Shen Yun shows. “I give him a copy of Zhuan Falun,and hope that he can live a good and normal life. Maybe some day, he can even join cultivation with me.”

“I am so lucky and happy to practice Falun Gong,” Ms. Chen said.

“I Was Touched by Falun Gong Practitioners' Courage.” 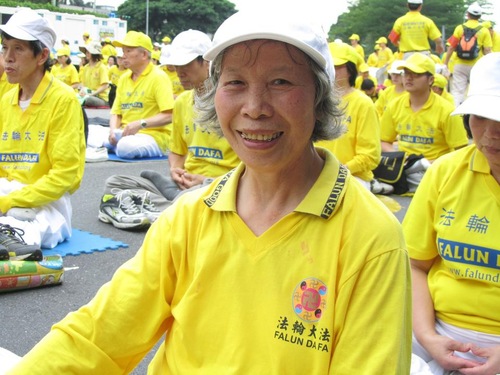 Ms. Wang Caixiu is from Guangxi Province, China. She moved to Taiwan after getting married. She was shocked when she saw the TV report about the April 25 protest in 1999. Growing up under the governing of the Communist Party, she knows well how severe the suppression can be, and how tough the environment is for Falun Gong practitioners. She was deeply touched by the practitioners' courage.

She realized that Falun Gong must be extraordinary, and wanted to practice it too.

She did not have a chance to learn until February 2001. Ms. Wang found contact information for a local exercise site, and obtained a copy of Zhuan Falun. Laying on the couch, she started reading. After a dozen pages, she sat up straight, and read it with a serious attitude.

“This is no ordinary book. I've read many books, but none of them is like this one. Every sentence is worth memorizing. I've read it many times, and every time I learn new things from it.”

Ms. Wang joined a free nine-day Falun Gong workshop in March, a month later. “I am so lucky to practice it. I enjoyed the workshop so much, so I joined another one in April.”

“I want to tell other people how great Falun Gong is, especially those Chinese who have been deceived by the Chinese regime's propaganda,” Ms. Wang said. She often passes out Falun Gong materials at the tourist spots, and even goes abroad for the events that help the public learn the facts about the practice and the persecution.

“I've learned the true purpose of life from Falun Gong. My life is rich and meaningful,” she said.