Ten Years Lost to the Persecution of Falun Gong

(Minghui.org) I was locked up for 10 years simply for my belief in Falun Gong. I walked out of the Harbin Women's Prison on December 11, 2013, a middle-aged woman. I had to start over from scratch.

Interrogated with Torture at Police Station

On December 8, 2003, a police officer told to go to the local station to answer some questions. When I got there, I was arrested and taken to Anshun Road Police Station, put in a small dark room, and interrogated. They wanted me to provide names of fellow practitioners, but I remained silent.

The interrogation continued for several days, and more officers participated. Some beat me and some burned my skin with cigarette butts. Then they hung me up by handcuffs with my hands behind my back and attached a rope to the handcuffs, which they pulled on now and then.

The pain was excruciating and I was covered in cold sweat. They continued to ask for names of other practitioners. They tied me to a radiator after I passed out.

The torture went on for three days. I was not given food or water. I was not allowed to use the toilet at night and only once during the day.

I was able to slip my hands out of the handcuffs one night and escaped, but was very soon re-captured and taken back to the police station.

Handcuffed and Shackled in Detention Center

I was transferred to Qiqihar Detention Center on December 11, 2003, and beaten for doing the Falun Gong exercises. I was handcuffed with my hands behind my back, and they put large shackles used for death row prisoners on my ankles. Even the smallest movement of my legs caused tremendous pain. 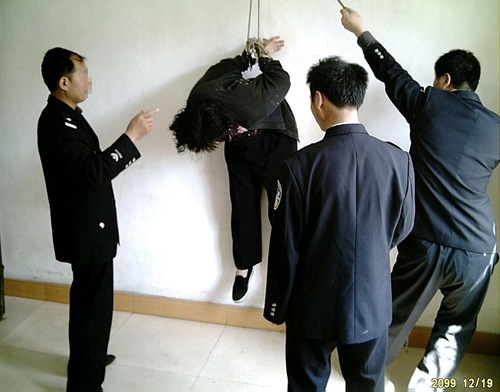 Torture Reenactment: Hung up by handcuffs with hands behind the back

Daily meals were vegetable soup (a few greens in water) with dead worms and sand on the bottom of the bowl and a piece of yellowish brown cornbread.

I was sentenced to 10 years in prison 10 months later and was transferred to Harbin Women's Prison in Heilongjiang Province.

Locked in a Small Cell in Prison

We arrived at the prison in October 2004. First, “personal monitors,” criminal inmates, were assigned to monitor us. Then we had to sit on small stools or were taken to a small cell for brainwashing.

Above every practitioner's bed was a sign that said, “This person was involved in a cult organization and undermined law enforcement.” I took down the one on mine. The team leader said that I either had to put it back or be held in a small cell.

The small cell, which was not heated, was dark and damp. My bed was on the ground and there were metal rings were above the bed. One of my hands was cuffed to the ring, so I had to sit.

Eight other practitioners were put in the small cell because they had also removed the sign. Practitioners in other wards protested and went on a hunger strike. Eventually we were released from the small cell and no longer had the sign above our bed.

Beaten for Not Wearing Prison Uniform

All practitioners were transferred to another area in March 2006. Guards made slanderous remarks about Falun Gong daily in December 2006. Warden Liu Keqiang announced at an assembly that the personal monitors could beat any practitioner as they wished, and if the practitioner died to throw the body into the prison yard.

Monitor Li Meilan was one of the worst. She stopped me from using the toilet and wrestled me to the ground when I tried to. After a while I came down with kidney disease and transferred to another ward. Team leader Zhao Bin was indifferent about monitors beating practitioners.

Prison ward Guo Haiying pulled me outside of camera surveillance range and beat me because I refused to wear the prison uniform. I shouted “Falun Gong is good!” and she pressed on my mouth so hard that my front teeth became loose. I reported on Guo and was transferred to the small cell.

I was chained the ground and not given a blanket. My kidney problem got worse, and because other practitioners protested, I was released from the small cell. However I could not walk on my own for six months.

I was admitted to the prison hospital twice in 2012 and diagnosed with stomach ulcers and heart and kidney ailments.

All practitioners were moved to a brainwashing ward, while I was taken to the medical ward in March 2013. To prevent communications among practitioners, ward chief Sun Yan did not allow practitioners to shower or use the restroom at the same time.

Prior Arrests and Detentions

I started practicing Falun Gong in 1995. I was in Dalian when the persecution started in July 1999. I overheard practitioners talking about asking the local government to release all detained practitioners. I went with them, was arrested, taken to a local school by the police and released later that day.

After listening to television and radio station broadcasting falsehood against Falun Gong I decided to go to Beijing to petition for justice for the practice. I was stopped by police in Beijing and arrested as soon as I admitted that I practice Falun Gong. I was taken to a Beijing office in Qiqihar the next day.

Two other female practitioners and one male practitioner from Kedong were also held there. The four of us were transferred to the North Street Police Station, then to No. 1 Detention Center. We were released 22 days later.

Around the 2001 Chinese New Year, local police came to harass me at home. To relieve tension with my family, I stayed with five practitioners whom just had returned from Beijing.

We were arrested by the Jianhua District police. Among the arrested practitioners, Ms. Niu Fengqin, Ms. Zhang Dexiang, Ms. Zhong Yajun and Ms. Shi Xiuying were sentenced to prison. I was released two months later.