(Minghui.org) Jiang Hongliang (蒋洪亮) jumped from the top of a pagoda tower 108 meters in height (over 350 feet) on March 31, 2015. He died in hospital less than an hour later. The Wenfeng pagoda is located in a public park in the city of Yixing, not far from the city of Wuxi where he worked.

Jiang was the local Chinese Communist Party (CCP) Deputy Secretary and head of the Political and Legal Affairs Committee (PLAC). As the head of PLAC, he was in charge of carrying out Party policy to persecute Falun Gong. 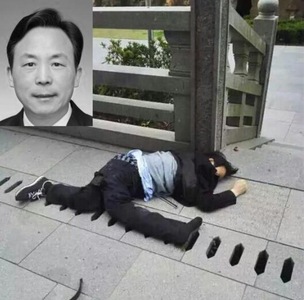 Jiang was appointed to his most recent position in March 2014. The PLAC in Wuxi city arrested at least 18 Falun Gong practitioners in 2014, according to Minghui reports. The practitioners were persecuted in a number of ways including imprisonment, home ransacking, prison sentences, and brainwashing.

A recent roundup of Falun Gong practitioners took place in the morning of March 25, 2015, at Huishan Park in the city of Wuxi. More than a dozen were arrested. Jiang’s apparent suicide followed less than a week after. Jiang appeared at a news conference in Wuxi the day before he jumped. Sitting in the front row, he didn't appear abnormal.

Party propaganda typically attribute suicides of CCP officials to depression or mental illness. Jiang's case was no exception. The real reason of his suicide remains unknown, however. Citizens are talking about the possibility of him receiving payback, or karmic retribution as in the Chinese traditional belief, for harming so many Falun Gong practitioners and their families.

Chinese media reported in April last year that 54 CCP officials had died of “unnatural causes” since 2013. Among them, over 40% were suicides. Twelve high-level PLAC officials have ended their own lives.

“He Said a Good Word About Falun Dafa, Then...”