(Minghui.org) Today's news from China includes incidents of persecution that took place in 12 cities or counties in 11 provinces. According to this report, 4 Falun Gong practitioners were subjected to mistreatment during their detention, and at least 10 practitioners were illegally arrested, detained or imprisoned. 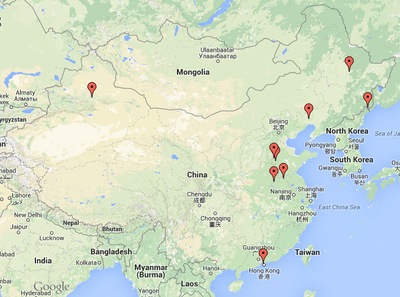 Ms. Zhao Guihua was arrested and detained on December 19, 2011. Li Meishan and other officers from the sub-team dealing with [slanderous term deleted] religions within the Jinzhou Police Department, Jiang Chengliu, from the Yi County Domestic Security Division, and Wang Wei, from the Longgou Police Station, along with other officers broke into Ms. Zhao Guihua's home and ransacked the place. They confiscated a computer, printer, Falun Dafa books, printing paper and a car.

During the medical parole, Li Meishan and other police officers extorted from her family a car, over 130,000 yuan and other personal items which totaled at least 30,000 yuan.

Ms. Zhao was arrested again by Li Meishan and other police officers. She was sentenced to seven years in prison. She is held in the Liaoning Women's Prison.

Mr. Wang Shoulue was diagnosed with very high blood pressure and still put on trial at the Qiaocheng District Court. He is held in a detention center.

Ms. Cao Huiying was arrested on the afternoon of March 30, 2015 for telling people about the persecution of Falun Gong.

Ms. Zhang Jiyun was arrested by the Linqing Domestic Security Division and the 610 Office on March 27, 2015. She is detained in the Linqing Detention Center.

Ms. Yao Jinling and Ms. Hu Yulan each were sentenced to three and a half years in prison by the Changji City Court in June 2014. They were taken to the Xinjiang Women's Prison in July.

Ms. Gong Xiaojuan was sentenced to a five-year term in September 2014. She was taken to the Xinjiang Women's Prison at the end of October.

He remains in custody at the detention center.

Ms. Lian Shuping from Zhangluji Town was reported to police for distributing Falun Gong informational materials on March 28, 2015. She was arrested by the Zhangluji Town Police Station, and taken to the Liaocheng City Detention Center.

Ms. Tong Lin was followed and arrested by officers from the Baoan District 610 Office on February 18, 2014. She was sentenced to three years in prison by the Baoan District Court on December 4, 2014. Ms. Tong pleaded not guilty and appealed the sentencing. She hired an attorney.

The Shenzhen City Intermediate Court denied her appeal on March 14, 2915 without a court hearing. Ms. Tong remains in custody at the Baoan Detention Center.

Ms. Hu Hong was recently sentenced to a four year prison term for distributing informational materials about Falun Gong. The verdict came more than four months after her trial by the Delingha City Court.

Changyi District Court sentenced Ms. Zhang Wei to seven years in prison in July 2014, but her family was only recently notified. Ms. Zhang was arrested at home on December 24, 2013, and was tortured. She is imprisoned at the Jilin Province Women's Prison.

““Teacher, Will You Finish Your Lecture?””