“Every Time I Recall the Torture, It's Like Tearing Open My Wounds”

(Minghui.org) “The prison guards didn't allow me to sleep. They drugged me, beat me every day, and then poured salt on my injuries. Every time I recall the torture, it's like tearing open my wounds,” said Ms. Liu Shuyuan, a 62-year-old Falun Gong practitioner from Tieling, Liaoning Province.

Ms. Liu was illegally sentenced to five years in prison for her belief in Falun Gong after her arrest on August 3, 2001. Her account of the torture at Liaoning Women's Prison during her five-year imprisonment offers a glimpse into the brutality of the persecution of Falun Gong by the Chinese communist regime.

According to Ms. Liu, in addition to the hard labor from 5:30 a.m. to 10 p.m., she was deprived of sleep and subjected to brainwashing sessions aimed at forcing her to renounce Falun Gong. She was not provided with enough food to eat, nor was she allowed to purchase extra food. Family visitations were denied.

Four inmates took turns monitoring her. They verbally abused and humiliated her.

As a result of the torture, Ms. Liu developed high blood pressure and vertigo. She later learned that the inmates had put unknown drugs into her food.

Because she refused to renounce her faith, she was subjected to intensified torture. Inmates forced her to squat from 6:30 a.m. to 9 p.m. starting in July 2005.

After being denied restroom use for more than 12 hours, she wet her pants and was dragged to the restroom and beaten by the inmates. They refused to allow her to change her pants.

Nine inmates stripped off her clothes, beat her, and pinched her body all over. They taped her mouth closed. She lost consciousness, and after she woke up, they continued the beating. Two inmates held her arms while the others beat her with shoes, brooms and clothes hangers. They shoved her to the ground and said, “Stand up by yourself, or we'll take that as you giving in [renouncing Falun Gong]!”

She struggled to stand up, and the inmates continued to beat her. They rubbed salt into the wounds that covered her body. To prevent others from seeing her injuries, the inmates only allowed her to use the restroom when nobody else was in there, and she had to be watched by two inmates.

For two weeks, they beat her every day and didn't allow her to take a shower or change clothes, despite the summertime heat. The injuries to her eyes, nose, and face took months to recover. While beating her, some inmates pulled out clumps of her hair, threatening to make her bald.

She lost more than 15 kg (33 pounds). She was very weak, felt dizzy and had difficulty breathing.

The inmates also threatened to force-feed her with pepper water, and to mix used toilet paper into her food.

“They would try whatever they could think of,” Ms. Liu recalled.

The inmates once confessed to her: “We are just following instructions from the guards. They told us, if you die, we can just say you died of a heart attack.”

Ms. Liu had been practicing Falun Gong for two years when the persecution started in 1999. Having experienced tremendous health improvement from the practice, she petitioned against the ban and was arrested twice and sentenced to two years of forced labor.

She was transferred between three labor camps in three cities between 1999 and 2000.

While detained at Liaoyang Forced Labor Camp, she was forced to do intensive hard labor, including digging holes for planting trees and making crafts until 3 a.m. She wasn't allowed to sleep if she didn't finish her quota. She also worked in a cement factory where the visibility was less than 5 meters (about 16 feet). No respiratory protection equipment was provided.

In the six months after she was released, the police continued to monitor and harass her.

During her August 2001 arrest, the police ransacked her home. She was deprived of sleep and hung up on a wall in the detention center. The police also locked her in a chair and in a small cage where she couldn't stand straight or sit down. When she held a hunger strike to protest the abuse, she was force-fed by officers. 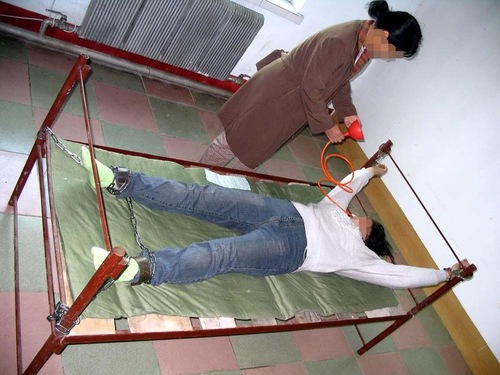 “Being Mindful of Others' Safety”