CCP Torture Methods Include “Pheasant Standing on One Foot”

The guards dubbed the torture 'pheasant standing on one foot.'”

The above is a personal account of what a Falun Gong practitioner was subjected to at the now-defunct Masanjia Forced Labor Camp for refusing to give up his belief.

“Pheasant Standing on One Foot (or Leg)” is a Chinese martial arts pose for practicing balance, which has been turned into a cruel torture method used by the Chinese Communist Party to attempt to make Falun Gong practitioners renounce their beliefs.

Detention centers, labor camps, and prisons use various forms of this torture to inflict harm on practitioners, who are often forced to stand on one foot for extended periods of time. To increase the suffering even more, the tormentors sometimes restrain the limbs of practitioners with ropes or handcuffs, or place objects in their hands or on their foot.

Hands and Leg Tied Up

While detained at Panjin Forced Labor Camp in May 2001, Ms. Su Ying was subjected to the “Pheasant Standing on One Foot” torture. The guards tied one of her legs up at the ankle and kept it suspended in the air. Her arms were spread out and tied up as well. 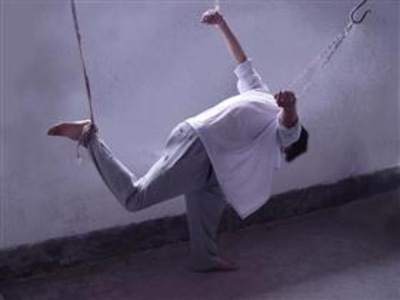 Ms. Su was forced to stand in this position all day long, and allowed just two hours of sleep each day.

Falun Gong practitioners detained at a detention center in Guanghan, Sichuan Province once faced similar torture. They were forced to stand on one leg against the wall, with arms stretched out and head down. Xiao Hongmo was kept in this posture from 7:00 p.m. until midnight, while being severely beaten.

Hand and Foot Cuffed Together

In Baimalong Women's Forced Labor Camp in Hunan Province, the guards lifted a practitioner's right leg to be cuffed to her right hand on one side of a window. Her left hand was then attached to the upper corner of the other side of the window, all the while forcing her to stand on her left leg for long periods of time to intensify the pain.

Held in a Cage

Ms. Liu Shuyuan recalled what she went through after her arrest on August 3, 2001.

“The police put me in a big iron cage. They spread out my arms and secured my hands to two handcuffs anchored to the wall. They then lifted one of my legs and tied it to the top of the cage. I was forced to 'stand on one leg like a bird.'”

Leg Raised up to Head Level

Ms. Wu Houyu from Luzhou in Sichuan Province was subjected to two and a half years of brutal torture in Nanmusi Women's Forced Labor Camp.

She was once dragged on the ground for two hours, causing her body to become a bloody mess. The perpetrators then forced her to stand on one leg, and forced her other leg high up over her head. She was kicked and beaten when she moved even slightly.

When she fell due to pain and exhaustion, the perpetrators stomped on her body and kicked her. Twice, she almost died from the torture.

Holding a Basin of Water on One Leg

At the Hengshui Brainwashing Center in Hebei Province, a Falun Gong practitioner was forced to stand on one leg and hold a full basin of water at the same time. He was punched and kicked whenever he lost his balance.

Mr. Li Wensheng, from Zhucheng of Shandong Province, was forced to stand on one leg under the scorching sun following his arrest on July 21, 1999.

The police ordered him to stand on one leg and raise the other leg at a 45 degree angle. He was savagely beaten whenever he had trouble balancing the brick placed on his raised foot.

Once police officer, Wang Hua, bashed Mr. Li's raised foot with a brick and hit his legs with a wooden stick. His toes bled, and his foot became badly swollen.

Thumbtacks Under the Heel

Practitioners detained at Qinduankou Prison in Hubei Province were forced to stand on one leg on tiptoes, with thumbtacks under their heels. If they put their heels down, they would land on the thumbtacks.

One Leg in a Water Basin

Mr. Cao Zhaohui, from Zhuozhou, Hebei Province, was forced to stand on one leg in a water basin while being shocked with four electric batons at the same time. The guards also beat him savagely with rubber tubes, and laughed wildly as they enjoyed his suffering.

Foot On a Stool

While detained at Wangcun Forced Labor Camp in Shandong Province, Mr. Yu Zongping was forced to stand on one leg on a narrow stool against the wall, with his hands raised up. Several people watched him closely to make sure he stood still, but he eventually collapsed due to exhaustion.