Looking Back on Master Li's Five Seminars in Guangzhou (Part 5)

As more and more people took up the practice of Falun Gong following Master Li Hongzhi's first four seminars in Guangzhou, the Qigong Association of Guangdong Province soon scheduled a fifth one at an auditorium with a capacity of about 1,000 people.

However, over 4,000 people registered for the seminar.

The Association asked for Master Li's input and was told that the seminar should be hosted at a reputable establishment—a good venue equipped with a high-quality sound system.

The fifth seminar was eventually held at Guangzhou Stadium with a capacity of 6,000. Many Falun Gong practitioners traveled from other provinces to attend the sessions. A second site was opened. Still, several hundred people stayed outside of the stadium to listen to the lectures.

The nine-day seminar in late December 1994 turned out to be the last lectures Master Li gave in China. Master went on to spread the Fa outside of China in the years that followed. 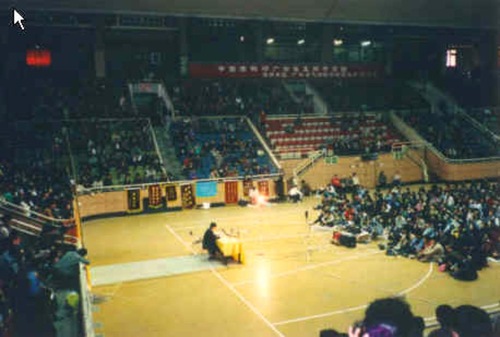 A practitioner recalled seeing Master Li, “Upon hearing that Master would meet with practitioners in the park before the session started, I rushed there. He looked young and tidy. He had a very kind smile. He was so unique. Master gave us his business cards. I couldn't grab one, so I said, 'We have come from Hunan Province. We haven't got business cards yet.' Master immediately gave me several. How time flies! We really enjoyed the time with Master Li.”

In the Presence of Divine Beings

The day before the commencement of the seminar, a practitioner went to visit Master Li in his hotel room and saw that Master Li was meditating. He decided to wait by the side. Master Li next went to the restroom, but still hadn't come out in half an hour. When the practitioner and a few others checked the restroom, they saw no one in there. To their surprise, Master emerged out of the restroom a bit later.

The assistant in Guangzhou told us that Master Li later explained what happened that day. Who got to attend what day of seminar had to be decided beforehand in other dimensions. The number of seats to be occupied by which god or Buddha was all pre-arranged.

Practitioners recalled that Master worked hard to make the lectures successful. He ate a small dinner because he was too busy to sit down for long.

A veteran practitioner recalled that Master emitted a lot of gong during these lectures and sent out a big Falun to cover the field. He also used many smaller Falun to cleanse and adjust practitioners' bodies. Master's law body took care of a lot of problems for practitioners.

Seeking the Fa from Faraway

Knowing that the Guangzhou seminar would be the last one in China, many people flocked there. A hotel near the Guangzhou train station was full of practitioners. During his second day there, Master Li visited staff members at the hotel. Many who couldn't get a ticket went there to see him.

The tickets were sold out way ahead of time, but several hundred practitioners went there to listen from outside of the stadium.

Even the floor of the basketball court in the stadium was full of people. Over 5,000 people attended on the first day. The stadium decided to rent the martial arts studio to us to play the live audio broadcast. Veteran practitioners offered their tickets to those who had never listened to the lectures and went to the Martial Arts studio to listen to the live audio broadcast.

Over half the practitioners attending the lecture came from out of town. Some came from rural areas and ate only the bread that they brought because things in Guangzhou were quite expensive. An elderly practitioner from Heilongjiang Province said, “I came from Jiamusi City in the north to Guangzhou in the south. It is a long way. I have obtained the Fa. I am so fortunate!”

Master shed tears upon hearing stories about how his students managed to come attend the last seminar despite their financial difficulties.

At the end of the lectures, Master told everyone:

“There are more than three thousand people who came from great distances, the farthest being from Heilongjiang and Xinjiang, which are four to five thousand kilometers, or more than eight thousand li away. It’s a long way to get here, and you endured a lot of hardships. Some people don’t even have enough money, and every day they eat instant noodles or even crackers.” (“Teaching the Fa and Answering Questions in Guangzhou” from Zhuan Falun Fajie - The Law of Zhuan Falun Explained)

This class could be considered international because the attendees included people from Hong Kong and Taiwan as well as Westerners. Some students had financial difficulties and were helped by other students.

A student had two sick family members and used all of his money to care for them. However, this did not stop him from going to Guangzhou to listen to the Fa. He slept on the street during his stay. Other students learned of his situation and mentioned it in a question slip submitted to Master.

People often can't help but cry when they meet Master in person because Master resolves problems that they couldn't on their own. Master bears the karma for them.

Four young men sat in the second row. They had strange facial expressions and were restless. They appeared to be under the influence of animal possession. Fearing that they might cause disturbance during the lectures, an assistant told Master about this. Master smiled and said that he knew it. On the third day of the lecture, the four young men appeared normal and were able to listen quietly like everyone else.

After the second day of the seminar, Master requested to stay in a different hotel near the stadium where the lectures were being held. Guangzhou practitioners changed the hotel from the one near the Baiyun Mountain to a hotel within five minutes of walk to the stadium.

Thus Hutian Hotel became the venue that Master met with many practitioners and assistants. Every noon, he listened to reports of assistants from various cities in China and gave guidance based on their local situations. Master met with several groups of people every day. He was very busy.

All staff members had a meal together after the lectures ended. They spread out around three tables. It was the first time for some students to have dinner together with Master, and they gave the seats near Master to veteran practitioners. Master knew what everyone was thinking; he visited the table furthest away from his.

Practitioners stood up and applauded. Master asked everyone to take a seat, but no one did because Master was standing. It was December in Guangzhou. Even though it was not as cold as winter in northern China, it was not that warm, either. But practitioners felt warmth when they stood near Master.

Master's words carried enormous energy, which ran through practitioners' bodies. Some students cried out of gratitude. Master did not eat much because he was speaking to students the whole time. Some green vegetables and tofu were left over on the table. Master asked the staff members to box them up and not to waste food.

On the last day of the lectures, many students gave flowers and banners to Master to express their gratitude. One of the banners said, “Unprecedented salvation and achievement since the beginning of heaven and earth.” At the end of the last lecture, Master left the stage while making Buddha hand gestures. All students stood up and applauded. Many who stood were in tears for a long time even after Master was long gone.

“Before, new students had a transitional process through which they came to understand the Fa. Back then, when I taught the Fa in Guangzhou, during the first two classes students didn’t seem to know what I was talking about. They just knew it was good, but they didn’t know what I was talking about. That is, the minds of the people in Guangzhou were preoccupied with making money, especially with it being after the economic reforms and opening up. It wasn’t until the third and fourth classes that they were jolted and suddenly realized what I was talking about. Only then did large numbers of students begin to catch up. Nowadays those who obtain the Fa later on often progress very fast. Maybe that’s because the environment has been formed and conditions in every respect have become ripe; that is, the external conditions are there.” (“Teaching the Fa at the Assistants’ Fa Conference in Changchun”)

Master held a meeting with some assistants in Guangzhou during this last seminar in China.

An assistant in Guangzhou recalled that most of the seminar ticket revenue went to the Guangdong Qigong Association. Two people from the China Qigong Research Association who also attended the seminar complained to Master that their association didn't have any profit share from the class.

Master immediately gave all his share of the revenue to the two people.

Many practitioners saw Master off at the Guangzhou airport. The airport security guards were impressed by Master's popularity and thought that he might be a high-ranking official from the Guangzhou military.

Master said to some practitioners, “You have been working hard.” The practitioners choked up when they heard this. As they watched Master enter the security gate, Master kept turning around and waving to them until he was out of sight.

“Looking Back on Master Li's Five Seminars in Guangzhou (Part 4)”