(Minghui.org) In its campaign to force Falun Gong practitioners to renounce their belief, the Chinese Communist regime employs various torture techniques using water, among many other methods.

According to reports compiled by Minghui.org, the following water torture techniques are often used on practitioners incarcerated in labor camps, detention centers and prisons:

Below we present cases in each category.

Guards at Liaoning Province Women's Prison instructed inmates to grab Ms. Wang Jinping' thighs and hosed her vaginal orifice. As a result, Ms. Wang was unable to urinate and became incontinent. Both her legs became swollen and turned black and purple.

Officers at Anjia Police Station in Jiangsu Province filled a large sink with water to torture Mr. Rui Lagou and Mr. Cai Jianhua. Both men were handcuffed and shackled. The police held them upside down and dipped their heads into the sink several times to simulate drowning sensations. Both victims choked in the water.

Mr. Jiang Guobo, a former official of the Weifang City Political and Legal Affairs Committee, was stripped naked and had his hands and feet tied up. The guards next pressed his head into water to suffocate him. They also used a hose to spray water into his mouth and nose to restrict his breathing. This torture lasted over half an hour each time.

Guards at Xianning Detention Center in Hubei Province stripped Mr. Huang Junliang naked and forced him to squat down with the back of his head pressed against a wall. They slowly poured water over the top of his head. When the water ran over his nose, it would form a “waterfall,” covering his nostrils and mouth. To catch his breath, Mr. Zhang had to swallow mouthfuls of water. By the time the torture was over, his belly was visibly bloated.

Stripped Naked and Had Cold Water Poured Over Body

A woman was arrested in December 2000 after she went to Beijing and displayed a protest banner reading “Falun Dafa is good.” While in detention, she was forced to stand barefoot on the concrete floor and savagely beaten. She passed out as a result, only to be awakened by inmates. They next stripped her naked and poured three basins of cold water over her. Her menstrual blood flowed everywhere. 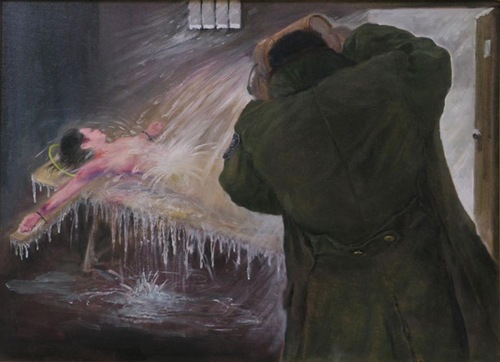 A doctoral student named Wang Shiyuan from Nankai University in Tianjin had 27 buckets of cold water poured over his naked body after he was forced to reveal that he was 27 years old.

Guards at Shuangkou Forced Labor Camp in Tianjin stripped Mr. Du Yingguang to his underwear and restrained him to a bed. Inmates kept pouring cold water on him, and the bed was soon soaked. In the meantime, a fan was turned on at the maximum setting to blow cold air towards him. Mr. Du suffered frostbite on his feet. A guard ordered inmates to cover him with a quilt, and they proceeded covered him with a quilt soaked with cold water for more than three hours.

In the winter of 2007, when the temperature dropped to freezing or below, prisoners in Deyang Prison in Sichuan Province poured basins of cold water over Mr. Xiong Xiuyou until he shivered all over. This was repeated every few days. After the “shower,” they forced him to walk over 40 meters back to his cell, naked. He was still disallowed to put on any clothes in the cell and had to sleep on a coir mattress and cover himself with a thin quilt. Mr. Xiong was in his sixties at the time, with serious physical injuries from torture. He had had a high fever for days, and his body twitched continuously. He also became completely incontinent, and the mattress was soiled with urine and feces.

Mr. Liu Naihe, a former high school teacher from Lianyungang of Jiangsu Province, was stripped naked outside and had icy water poured over him. His tormentors next held his hands against window bars to freeze him. The weather was so cold that his tormentors had to pull their hands away to warm themselves. Mr. Liu broke free for a moment, only to be captured and badly beaten. In the ensuing struggle, his head hit the cement floor, and blood gushed from his forehead.

Former judge Liang Yuncheng from Dandong City, Liaoning Province once had hot chili powder placed in his underwear while being punched in the face and whipped with his own shoes. The guards next poured cold water all over him. When the guards decided it was too much work to go to refill the bucket in the washroom, they simply scooped up the dirty water laced with chili powder from the floor. The chili powder severely irritated Mr. Liang’s eyes, genitals, and wounds. The torture went on for over three hours.

Mr. Ma Shengbo was once stripped naked in a room with the door and windows wide open. In the meantime, he had cold water poured over him. He lost consciousness as a result.

In Beijing's Chaoyang Detention Center, a young woman in her twenties was stripped naked and drenched with cold water. When the guards failed to make her renounce Falun Gong, they put pajamas and socks on her before pouring cold water into her collar and pants. They blew on her with a fan at the same time. Water turned into ice, and her clothes became frozen. She lost consciousness.

Mr. Zhu Wenlong was forced to take off his clothes and stand still. Over twenty inmates surrounded him and poured cold water over him. They also used a harsh scrubbing brush to “wash” his head until it was covered in blood.

Mr. Zhang Jinqi, 76, from Huairou District of Beijing, is a retired engineer. While he was detained at Huairou Detention Center back in 2001, the guards ordered inmates to strip off his clothes and slowly pour 50 buckets of cold water over his head on a freezing cold day. He was beaten at the same time.

When Mr. Li Zhanxian was admitted to Luosiling Detention Center, guards poured ice-cold water on his head and down his body for 40 minutes continuously.

One July day in 2008, guards at Xihu Prison in Liaoning Province had two inmates strip Mr. Gong Enrong and hold him down. Three other prisoners then doused cold water over the top of Mr. Gong's head. Such torture was dubbed “brainwashing” at the prison.

Mr. Guo Chunzhan suffered similar torture at Xingcheng Detention Center in Liaoning Province. He was forced to squat down and had cold water poured over the top of his head until his lips turned purple.

Mr. Zhao Guangxi from Heilongjiang Province had his head pressed under a water tap at Pingfang Detention Center during the coldest time of the year. The guards turned on the tap to drip water onto Mr. Zhao's head until he shivered all over and his head became numb.

Mr. Fu Yao, a music teacher at Nongfeng High School in Shuangcheng, Heilongjiang Province was once lined up together with eight other practitioners at Changlinzi Forced Labor Camp. They were all stripped naked and made to squat in a line. Guards had cold water poured over the practitioners' heads continuously. Some practitioners lost consciousness as a result.

Guards at Wushun Labor Camp hung a leaky bucket over Mr. Zhang Huabo and filled it with water, which streamed onto his head. The bucket was refilled constantly until he passed out.

Doused with Cold Water While Fully-Clothed

When Ms. Mo Yuping soiled her pants after being deprived of bathroom use, guards at Shandong Women's Forced Labor Camp gave her a “shower” by dousing her with icy water. Her winter jackets and pants were soon soaked, but the guards did not allow her to change. Instead, they opened the door and the window to let the cold air in, and Ms. Mo's clothes soon became frozen. She developed a nervous system disorder as a result.

In Division 5 of Liaoning Province Women's Prison was a “ghost room” set up specially for torturing Falun Gong practitioners. In the coldest part of winter, guards forced Ms. Han Xuejun to stand in the courtyard barefoot and poured cold water into her winter jacket. It was snowing at the time, and the temperature was twenty degrees below zero. When she still refused to renounce her belief in Falun Gong, a guard thrust the handle of a toilet plunger into her mouth.

Ms. Zhang Shuxia also suffered at the same prison when she was in her sixties: two inmates poured cold water from her neck down, completely soaking her clothes. She was then made to stand still for a long time in a room with the windows open.

Held Still in Containers or Ponds Full of Cold Water

While incarcerated at Dabei Prison, Mr. Zhang Jie was forced to sit for over ten hours inside a large basin filled with cold water, all the while having water poured over her.

Ms. Zhao Shuxiang suffered similar torture at Harbin Drug Addiction Treatment Center. She was made to sit in cold water in only her underwear and shocked with electric batons at the same time. She lost consciousness three times during the torture.

Mr. Lu Yuping was made to sit inside a large, dirty tank every day for refusing to renounce his belief in Falun Gong. Guards at Tailai Prison filled the tank up to his neck, soaking his winter coat.

In a remote county in Inner Mongolia, police threw a group of Falun Gong practitioners into a waist-deep pond. Even female practitioners who were menstruating were not spared. Practitioners were forced to soak in the water for over ten hours at a time.

Two other cases also involve the use of ponds as punishment tools:

Mr. Fan Qingjun from Hebei Province was thrown into a crystallizing pond. He was forced to soak in the frigid water for a day at a time, which left him with arthritis and back and leg pain.

In Sichuan Province, Mr. Yang Xianjun was thrown into a cold pond in a garden at the government compound. He was soaked neck-deep for half a day.