Falun Dafa Is the Only Hope for Consummation

(Minghui.org) With her celestial eye opened at a very young age, Ms. Huang Gancao began to see even more scenes in other dimensions after she started practicing Falun Gong (also known as Falun Dafa) in 2006.

She is fully aware that what is shown to her is limited to her cultivation level, but she is grateful to Master Li (the founder of Falun Gong) for allowing her to see certain things with her third eye to encourage her to be more diligent.

As Ms. Huang is illiterate, she asked two Minghui correspondents to write down her cultivation experience. 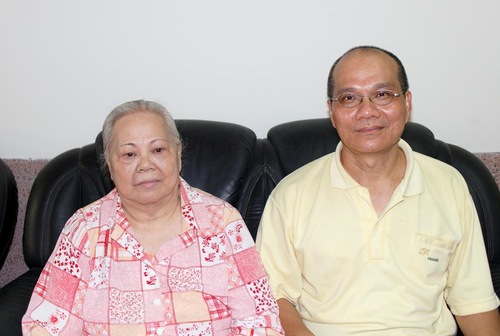 Ms. Huang's husband died of liver disease in 2006, shortly after he was introduced to Falun Dafa. He had been looking for the righteous Fa for decades, and was once in charge of a big ritual site in Nanhua Township, an outlying mountainous region in Tainan City, Taiwan.

Unfortunately, his illness took his life before he had a chance to truly practice Dafa. Devastated, Ms. Huang's health deteriorated rapidly. Several times, she was on the verge of death and had to be hospitalized.

Ms. Huang, however, felt relieved when a friend told her that he dreamed of her late husband, who asked him to relay the following message to her,

“Falun Dafa is the only hope for consummation. You should cherish this unprecedented opportunity and practice it diligently. Also, please pass this message to my wife and my son Zheng Yaodong.”

Ms. Huang took the dream as a hint for her to practice Dafa. She admitted that her introduction to the practice was a bit unusual, but she was happy to have finally started the journey because of the friend's dream.

It has been eight years since.

Master Taught Her Zhuan Falun in Other Dimensions

In the beginning of her cultivation, Ms. Huang felt pain all over her body, and she also felt very weak. She almost quit as a result, but she held on after seeing through her third eye that the pain was a result of Master purifying her body.

Ms. Huang once saw many shining golden Faluns rotating around her during meditation. Since then, she has seen Master's Law Body frequently. Master would often encourage her, purify her body, and cleanse the dimension around her. She felt deep gratitude towards Master and spent as much time as possible on doing the exercises and studying the Fa.

Her son would read the book Zhuan Falun to her. For the parts she could not understand, Master would show her images in her meditation to help her comprehend the Fa principles. This way, she finished the entire book in nine months.

Every time a new article written by Master is published, a local practitioner would deliver a hard copy for her son to read to her.

Encountering Tests on the Cultivation Path

Ms. Huang has often seen mysterious phenomena in other dimensions during meditation. Although the scenes she saw were little and did not reflect the whole picture of the universe, she could still feel the profoundness of Dafa.

About three and a half years ago, Ms. Huang suddenly noticed that every particle in the air in her room had turned into an eye. These eyes watched to see if every act of hers was in accordance with the standards of “Truthfulness-Compassion-Forbearance.”

Ms. Huang said, “I did not realize how many bad thoughts and attachments I had until after I began cultivation. If it were not for Falun Dafa, I would have been in hell already. With cultivation, I gradually rectified and assimilated myself to the principles of Truthfulness-Compassion-Forbearance.”

She was moved to the point of tears.

Speaking of rectifying herself and improving her xinxing, Ms. Huang gave an example. On one occasion, her celestial eye saw a beautiful bucket with a golden ribbon floating toward her, as she washed her hands in the sea. She wanted to take it home, but with this thought her hands were suddenly stained with manure.

She still had trouble parting with the bucket, and then she heard Master's loud voice, “That ribbon is a stinky rope used to tie dead bodies.”

She quickly realized her attachment of greed and left the site. But the gate to heaven was shut and she could not get through it. The gatekeepers would not open the gate until she realized she was wrong.

Becoming Compassionate after Seeing a Scene of Elimination

One day two years ago, Ms. Huang saw in meditation that a fellow practitioner was bringing materials to help her build a ladder to Heaven. Each time a practitioner looks inward for their attachments, their level of xinxing will move up higher on the ladder.

Ms. Huang has always looked inwards on everything. She saw herself climbing the ladder higher and higher. When she reached a city gate, she was escorted into the city by a pair of divine cherubs.

The city was very pretty. All the flowers were beautiful and the people were affable. Ms. Huang liked the place so much that she decided to stay there. Suddenly, she heard a voice urging her to go back, as many people were awaiting her salvation. When she resisted, for fear that she might not be able to come up there again, an image suddenly appeared in front of her.

In the image, she saw many people being drowned in the sea, buried alive, and burned to death in an earthquake. She saw practitioners rising upward while hundreds of thousands of ordinary people fell downward and were eliminated. She also saw people sadly crying and blaming themselves near dirty places like pig pens and drains.

Ms. Huang felt a wave of compassion for those piteous sentient beings, and she promised, “I will go back down to save them.”

Clarifying the Facts to Save Sentient Beings

After seeing the scene, Ms. Huang realized that time was pressing and she had to go out to tell people about Falun Dafa. Some people accepted it and started to practice, while others sneered at her. But nothing would bother her because she knows that her xinxing would be uplifted as long as she cultivates diligently and helps more people understand why the Chinese Communist Party is wrong in persecuting Falun Dafa.

She said that high-level beings once showed up in her meditation trying to test her and tempt her.

They praised her and left.

She also realized that, because of her diligent cultivation, the environment around her, including the mountain where she lives, her son, her daughter-in-law, and her grandchildren, has also improved in character.

She knows that Master cherishes every Dafa disciple. She also understands that, to thank Master, practitioners must cultivate diligently and improve their xinxing together.

“My Home: A Stage for Clarifying the Truth”