(Minghui.org) Falun Gong practitioners in South Australia participated in the Australia Day Parade and celebration in Adelaide on January 26, 2015. Their beautiful parade entry won the award for "Most Creative." Practitioners have been invited to this annual celebration since 2004 and have won several awards. 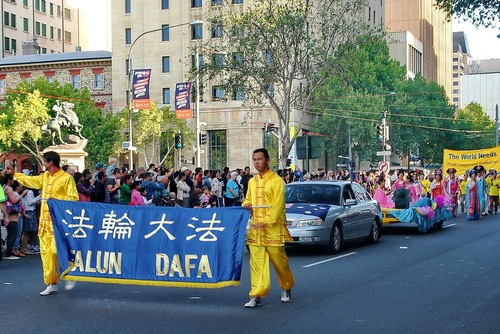 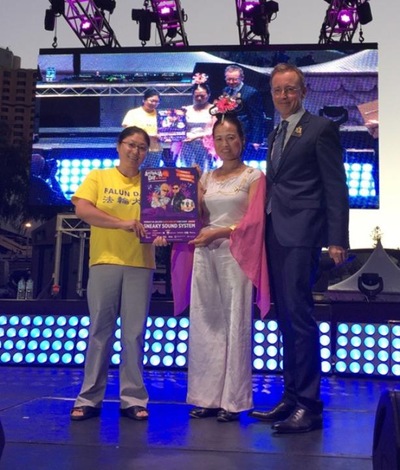 Mayor Martin Haese presents the "Most Creative" award to the Falun Gong entry.

Over 40,000 spectators saw the beautiful lotus flower float and elegant, traditional costumes that made up the Falun Gong entry. Cheers, applause, many thumbs-up, and kind words of praise greeted the procession, as some of the onlookers took pictures with practitioners and others copied the movements of the exercise demonstration.

Many people asked for more information about Falun Gong and learned that it is a traditional cultivation practice based on Truthfulness-Compassion-Forbearance. A middle-aged couple from Indonesia was impressed by the practitioners' calm and inner sense of joy. They listened to an introduction and wrote down contact information, saying they were interested in learning the practice.

Among the spectators were many Chinese who were inspired by the beauty of the Falun Gong entry. A new immigrant from China said, “The ladies in their beautiful costumes look like fairies. They seem to be meditating in a heavenly lotus pond. It's gorgeous!”

Falun Gong practitioner Ms. Zhao said, “I'm very touched to see how much people like our entry. It's Falun Dafa that brought us the beauty.”

Nareta and Eny were excited to be part of the Falun Gong procession for the first time. Their colleague introduced Falun Gong to them years ago.

They felt very fortunate to have seen a Shen Yun Performing Arts show and were very impressed. Nareta bought 6 tickets last year and brought her whole family. She has started reading Zhuan Falun, the main book of Falun Gong. Eny is again bringing 3 of her friends to the Shen Yun show this year.

They said after the parade, “It's so great we could be part of this beautiful parade! We will join you again! You are outstanding! Keep up with your great work!”