(Minghui.org) Falun Gong practitioners from Madrid held a signature collection event at Plaza Callao, downtown Madrid, on February 21, exposing state-sanctioned organ harvesting in China and calling for an end to the persecution. 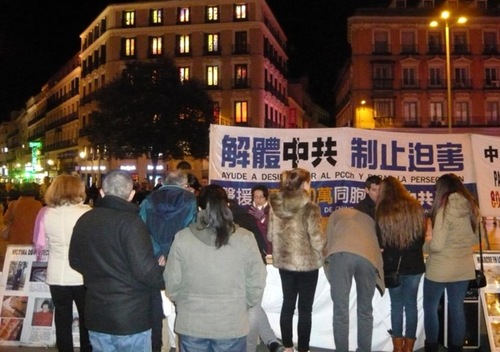 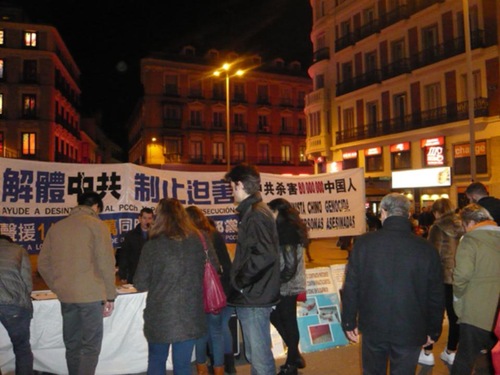 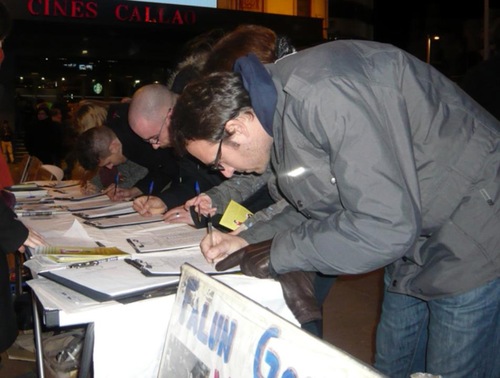 Some of the locals had never heard about Falun Gong and the persecution before. They were shocked when they learned of the Chinese regime's forced organ harvesting. Many signed on the petition to call for an end to the persecution. Some of them also told their friends and asked them to sign, too. Others wanted to learn the exercises and asked about the local exercise site.

Some Chinese people also stopped by the practitioners' booth. Three young Chinese men signed on the petition after learning about the persecution. One of them used to be a member of the Communist organization Young Pioneers. He was happy to have a chance to withdraw from that organization with the practitioners' help. Interested in learning more details, they asked for the address of the Falun Gong websites.

A Chinese lady, who is a Christian, told the practitioners that she did not understand why they held such activities. A practitioner told her that Falun Gong is a Buddhist School cultivation way, following the teachings of “Truthfulness-Compassion-Forbearance.”

“We are not a political group,” the practitioner said, “However, the atheist communist party has been persecuting people who have spiritual beliefs. They even harvest organs from living Falun Gong practitioners. Our activities are meant to expose the crimes of the communist party and to tell the public about what Falun Gong really is.”

The Chinese lady thanked the practitioner for telling her these things. “I was deceived by the communist party's propaganda. Now, I understand that Falun Gong is a cultivation way that teaches people to be compassionate.”

“Everybody should have the freedom of belief, and what the communist party is doing is wrong,” she said.