Trial Aborted after Standoff Between Defense Lawyers and Judge

(Minghui.org) Falun Gong practitioners Mr. Zhang Hongguo, his wife Ms. Zhang Xizhen, and Mr. Liu Bingbing were scheduled to be tried on February 12, 2015. They were arrested along with nine other practitioners eight months ago for their spiritual belief. The trial was aborted because five defense lawyers rejected unreasonable demands imposed on them by Zaoqiang County Court in Hebei Province.

The defense attorneys were not allowed to bring their laptops, cell phones, legal pads, or pens into the courthouse. All documents for the defense were required to be downloaded ahead of time onto computers provided by the court. Only two family members of each defendant were allowed to attend the trial.

The lawyers rejected the unreasonable and highly irregular demands, but the judge insisted on these stipulations. The standoff lasted more than four hours, until the judge ultimately called off the trial.

Early in the morning on February 12, all streets leading to Zaoqiang County Court were closed. Many police officers, government agents, and security personnel were seen on duty near the courthouse. They questioned passersby and prohibited people from using cell phones and taking photos. They even dressed as women from the defendants' village to try to gather information about their families and lawyers. 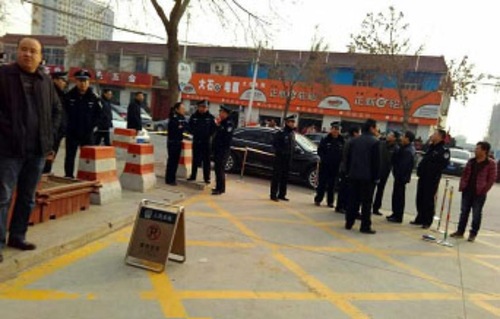 Mr. Liu retained three attorneys to represent him, while the other two practitioners had one attorney each. One of them, Wang Yu, was illegally detained for several hours on January 28 for obtaining her client's signature on a letter.

The defense lawyers were not allowed to meet with Mr. Liu Bingbing on February 11 with the excuse that no visiting rooms were available. Their call to the local Procuratorate to lodge a complaint was ignored.