The three, Ms. Jia Fengzhi, Mr. Ma Zhanquan and Mr. Wang Jianfu, were arrested by police from the Domestic Security Division of the Pinggu District Police Department and the Binhe Police station, and the Yuyang Police station.

Falun Gong practitioners in China download the calendars from Minghui.org and print them to give to people as a new year's gift. The calendars have become a popular item since practitioners began giving them out a few years ago. 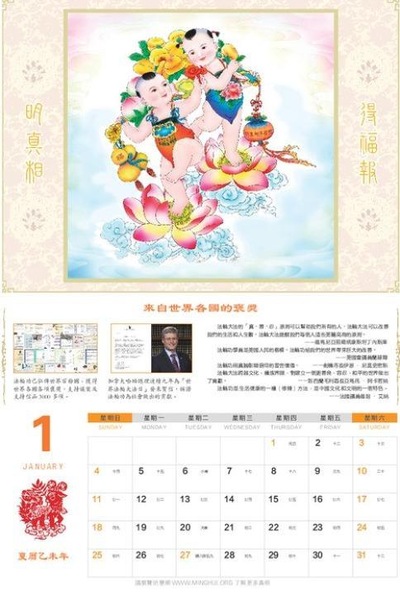 Mr. Wang, from Xigao Village, Donggaocun Town, was arrested in 2001 and sentenced to seven years in prison. His wife was also arrested, leaving their daughter alone at home to care for herself.

Ms. Jia Fengzhi, from Pinggu Town, had been sentenced to forced labor prior to her recent arrest.

According to Minghui.org, 81 Falun Gong practitioners have been persecuted by the Pinggu District authorities, where four have died as a result of the persecution.