(Minghui.org) Falun Gong practitioner Ms. Song Xiu from Shandong Province recently filed a criminal complaint against Jiang Zemin, former leader of the Chinese Communist Party, for launching a persecution which has lasted 16 years. She submitted her legal filing to the Supreme People's Procuratorate in August and hopes that Jiang will be brought to justice.

Ms. Song has been repeatedly arrested and detained for practicing Falun Gong since the persecution began in 1999. She was twice put into a forced labor camp and was brutally tortured for refusing to recant her belief.

Ms. Song stated, “The persecution has caused a tremendous amount of physical pain and psychological damage to me and my family. Jiang, as the one who launched the persecution, is responsible for all of the injustice. Jiang cannot escape the legal consequences of the unprecedented genocide of Falun Gong practitioners.”

The following is Ms. Song's account of her ordeal.

Arrested for Appealing for the Right to Freedom of Belief

I started practicing Falun Gong in 1998. Soon, the colon disease that I had suffered for ten years was gone. I lived by the principles of Truthfulness-Compassion-Forbearance, and my moral character also improved. With a newly-gained health and a sense of purpose, I had bright outlook in life.

However, my world was turned upside down when Jiang launched the persecution in July 1999. In the following years, I was repeatedly arrested, detained, put through forced labor, and tortured for my belief.

To appeal for my constitutional right to freedom of belief, I went to Beijing in July 2000 and was arrested on Tiananmen Square. At the detention center, the police stripped me naked and took from me whatever cash they could find. I went on a hunger strike to protest the arrest and was shackled and handcuffed for three days. The guards hit me with a screwdriver.

I was transferred after ten days to a detention center in Tianjin. Because I refused to reveal my identity, the guards hit me with a rubber baton. They shackled me and forced me to walk outside barefoot until my feet bled. I was tortured and force-fed. I was released two weeks later, under the supervision of my workplace. 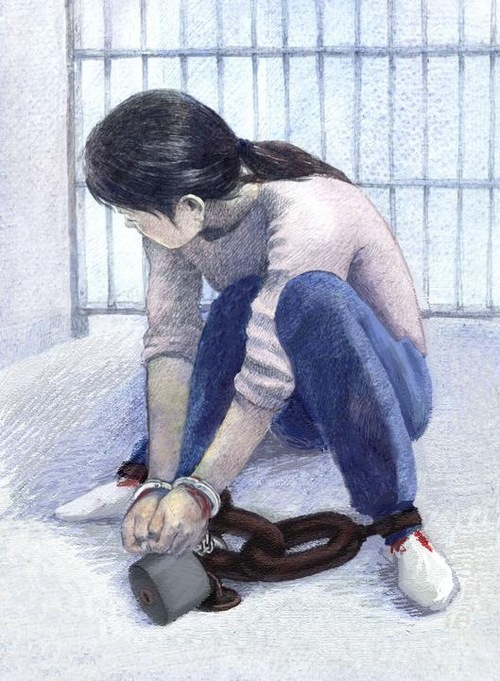 I was arrested again six months later in my hometown. After being released a month later from the city detention center, I was taken directly to a brainwashing center and went through intensive brainwashing.

While posting banners with information about Falun Gong in October 2002, I was arrested and taken to the Gaomi City Police Department. The police officers slapped me repeatedly. My face swelled up, and I temporarily lost my vision.

My home was ransacked, and my Falun Gong books were confiscated. I was detained for a month at the Gaomi City Detention Center before being taken to the No. 2 Women's Forced Labor Camp in Zibo City. I was illegally detained there for the next three years.

In order to make me renounce my belief, the camp guards forced me to stand for long periods of time. The detained practitioners were shown propaganda films slandering Falun Gong and its founder. We were not allowed to sleep and forced to write “thought reports.”

I was later made to perform intense labor for more than ten hours a day with a ration of only three buns a day.

Police officers broke into my home in July 2008 and arrested me. They took my Falun Gong books, audio and video tapes, a television set, a laptop, and 2,400 yuan in cash. I was taken to Chaoyang Police Station.

After an interrogation session, I was taken to a hospital for a full physical examination. Diagnosed with a heart problem, I was denied admission at the detention center and released later that night.

I left home temporarily to avoid being arrested again. However, soon after my return in October, the police came after me. I was arrested and illegally detained at the Gaomi Detention Center.

Because I refused to wear the prisoner uniform when I first arrived, I was tied to an “iron chair” for 24 hours. Later, I was made to perform hard labor for long periods of time, sometimes until 3:00 am. The inmates assigned to monitor me verbally and physically abused me whenever they felt like it, and the food was disgusting.

After two months at the detention center, I was sent to the No. 2 Women's Forced Labor Camp again for a year. 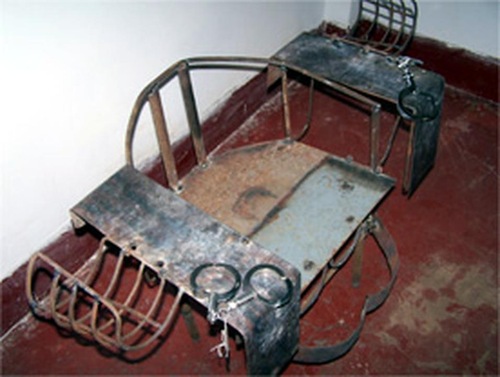 Tortured at the Forced Labor Camp

Because I shouted, “Falun Dafa is good,” one time at the camp, I was cuffed and hung to a windowsill for ten days with my mouth taped shut. I was administered unknown substances and became unconscious. The guards then made me write a statement renouncing Falun Gong.

After regaining consciousness, I refused to cooperate with the guards and was dragged from my ward to a small cell about 100 meters away. My clothes were torn, and my body was covered with cuts.

I was cuffed to a bed in a sitting position, and my legs were tied together for ten days straight. I was not allowed to use the bathroom and had to soil my pants over and over again.

I was repeatedly given unknown substances that made me unconscious. The guards shocked me with multiple electric batons. I was covered with bruises, and my hands became swollen due to being cuffed for long periods of time. My weight dropped rapidly, and my hands were severely injured. I suffered so much in those ten days that it seemed like an eternity. 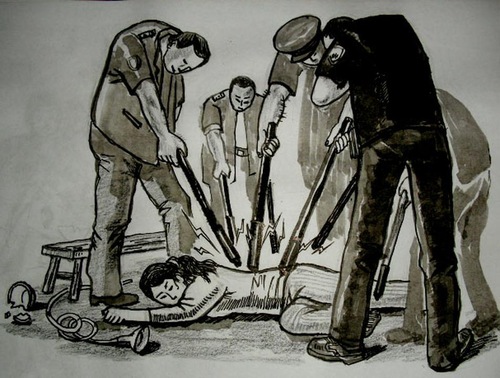 On the verge of death, I was taken a hospital. My hands were cuffed to the hospital bed, and I was made to pay for my medical expenses.

After I was discharged, I was taken back to the labor camp, locked in a small cell, and monitored by two inmates who verbally and physically abused me.

One time, I tried to use the bathroom without permission and was dragged back to the cell. After I urinated all over the floor, a guard prohibited anyone from cleaning up the mess for days, to humiliate me. My term was also extended.

While telling a soldier about the persecution of Falun Gong near the Gaomi Train Station in September 2014, I was arrested by officers from the Jiaotong Police Station.

I was interrogated at the station and beaten by several officers. They pushed me to the ground, curled me up in a ball, while an officer cuffed my hands to my back. I was covered with bruises and wounds and experienced severe pain in my legs.

The police forcibly took my fingerprints and took me to the Weifang Hospital for a thorough physical examination. Though my blood pressure was high, I was admitted to the Weifang Detention Center, where I was detained for four weeks. I was released after my family paid a fine of 56,500 yuan.

“Believing in Master and the Fa Is Fundamental for Practitioners”