(Minghui.org) Today's news from China includes incidents of persecution that took place in 11 cities or counties in 8 provinces. According to this report, 5 Falun Gong practitioners were subjected to mistreatment during their detention, and at least 25 practitioners were illegally arrested. 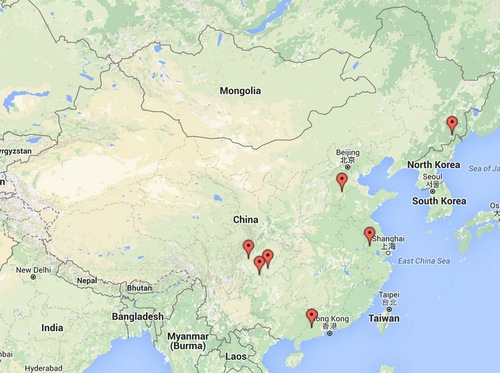 Ms. Zhang Xiuhong from Huayang Town was arrested by officers from the Domestic Security Division and the 610 Office when she was talking to people about Falun Gong in April 2015. Detention Center officials refused to admit her due to her serious illness symptoms. She was released. Ms. Zhang's case has been submitted to the court. She is facing trial.

Ms. Liu Xiaolin and her husband Mr. Xia Chenggui, from the Panlong Primary School in Jiuzhi Town, Hejiang County, were suspended from teaching classes recently. Officers from the Hejiang Domestic Security Division and officials of the Hejiang Education Bureau have filed a case to investigate the couple's lawsuits against Jiang Zemin. Ms. Liu was arrested and taken to the Town Government Brainwashing Center. Mr. Xia became displaced.

Ms. Piao Jinzi, from Longjing City under the jurisdiction of Yanbian City, was arrested by officers from the Longjing City Police Department and the Anmin Police Station when she was distributing desk calenders with information about Falun Gong on the afternoon of November 27, 2015.

The three practitioners hired lawyers to appeal their sentences to the Hengshui Intermediate Court. On November 1, 2015, Judge Wang Yu, among others at the intermediate court, upheld the original verdicts.

Mr. Zhang and Ms. Liu were taken to the Jidong Prison in mid-November 2015. Ms. Zhang was taken to the Shijiazhuang Women's Prison.

Ms. Jiang Lufen was arrested in November 2015. Her home was ransacked. Her whereabouts are unknown.

All the practitioners have returned home, except for Ms. Chen Duanyi and Ms. Li Jinfeng, who have escaped.

Ms. Wu Qing is a teacher at the elementary school attached to the Wuxue Teaching College. She was detained by Domestic Security officers on September 17, 2015, who used the excuse of looking into the criminal complaints she filed against Jiang Zemin, the former Chinese dictator. She was transferred to the Hubei Province Legal System Education Center (a brainwashing center) on September 25. Ms. Wu is still detained.

Ms. Xu Xiufen was sentenced to two years' imprisonment on November 26, about one year after she was arrested for practicing Falun Gong. Prior to her latest ordeal, she was imprisoned for one year, and two and a half years in a labor camp, all for refusing to give up her belief in Falun Gong.

Ms. Xu appeared weak during the trial on October 29. She testified that Falun Gong taught her to be a good person and that she broke no laws by believing in the practice. Her lawyer also defended her innocence, emphasizing that the persecution is illegal.

Xihu Prison guards recently intensified their abuse of imprisoned Falun Gong practitioners. Meng Xianguang and Chen Xiu were shocked with electric batons for three straight days starting on November 20. As a result their bodies were covered with bruises and wounds, and they had difficulty walking.

Ms. Lin Huawen was arrested by officers from the Chengfeng Police Department and has been held at the Daqing No. 1 Detention Center for more than nine months. She suffered both physically and mentally. She became emaciated.

“The Joy of Telling People about Falun Gong”