Chinese Residents Show Their Support for Lawsuits Against Jiang

(Minghui.org) Over 1,100 signatures were recently collected in Jinzhou City, Liaoning Province, from Chinese citizens willing to show their support for the more than 200,000 lawsuits filed against former leader Jiang Zemin. Jiang is being sued by Falun Gong practitioners for his role in orchestrating the brutal 16-year persecution against this peaceful cultivation practice.

One village resident, Wang Fu said that Jiang's land policies have resulted in exorbitantly high rents for many years. “As far as I can remember, he [Jiang] has not done anything good. I am glad that he would be made to stand justice.”

Another person who gave his signature said that Jiang continued Mao Zedong's ideology of struggle. “Mao once said 'battling with heaven is endless joy, fighting with the earth is endless joy, and struggling with humanity is endless joy.’” He said that such a profit-driven mindset has not only damaged the Chinese environment, but has also caused moral degeneration.

A taxi driver who showed his support by signing the petition said that Falun Gong practitioners are good people. “The persecution should not have started in the first place, let alone continue for such a long time,” he affirmed.

Ms. Xia Xiaoyun said that she knew many practitioners. “They are following the principles of Truthfulness-Compassion-Forbearance. They are nice people and treat others well,” she said, adding that the suppression should stop soon.

Another village resident said that Jiang had done many bad things, including persecuting Falun Gong. “What he [Jiang] did is to try to stop people from becoming good citizens. He is the worst of all.”

Throughout China people are learning the truth about Falun Gong and the persecution, despite the government's efforts to slander the practice and hide the atrocities of the persecution. As more people learn the facts, coupled with their own observations, they are courageously calling for Jiang to be brought to justice. Below are signatures collected from other cities and provinces. 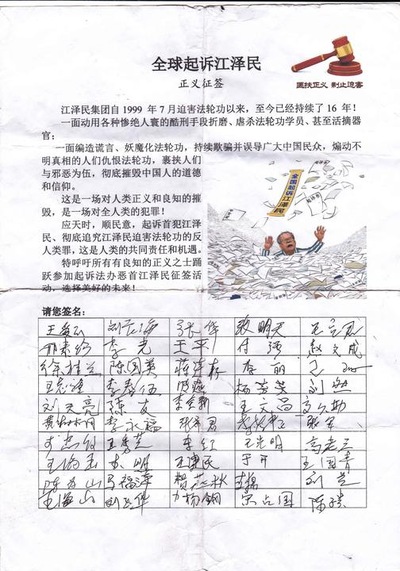 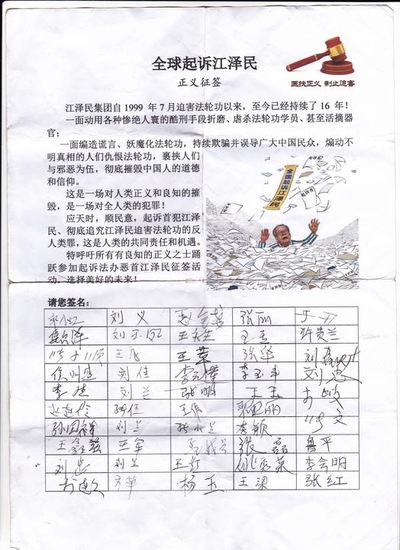 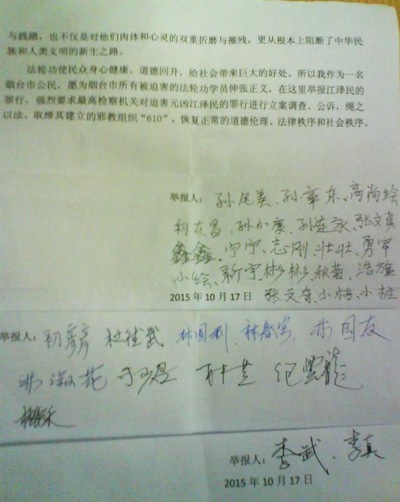 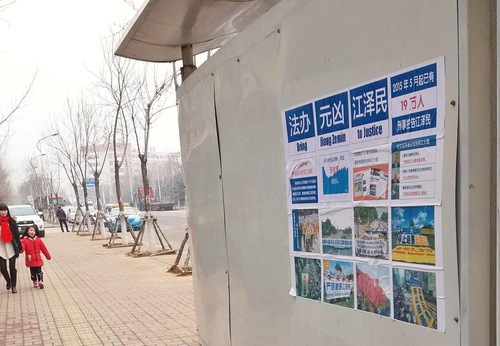 A poster in Yantai City provides information about the lawsuits against Jiang.