(Minghui.org) Falun Gong practitioners from Sydney, Australia, participated in the National Cherry Festival Parade in the town of Young on December 5, 2015, and received warm feedback. Chinese and Australians spectators praised the beauty of the Falun Gong parade procession. 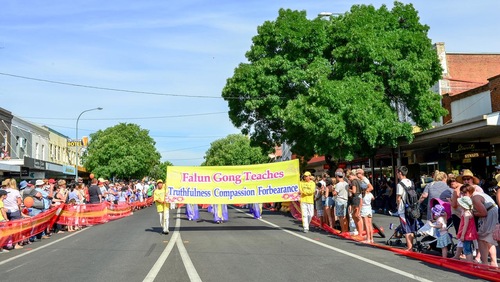 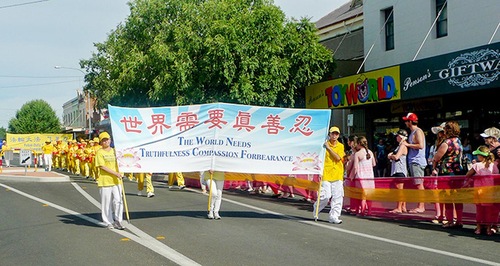 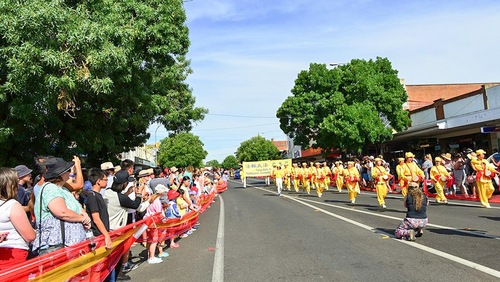 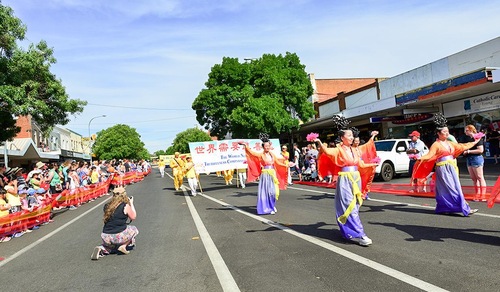 It was the 66th National Cherry Festival in Young, a town 380 kilometers from Sydney in Southwest New South Wales. It's well known as the capital of cherries in Australia. Nearby residents, as well as tourists, gathered to celebrate the harvest.

Dressed in yellow traditional costumes for waist drum playing, and colorful fairy lady costumes for the fairy dance, Falun Gong practitioners looked outstanding in the parade procession. Fairy ladies danced to the music of “Falun Dafa Is Good.” The drum playing was happy, resonant, and exciting.

Spectators applauded warmly for the performance by Falun Gong practitioners. Photographers from local media followed the procession to capture the performances. Both Australians and Chinese commended the Falun Gong performance. Sheran, a local resident, and her friends told the reporter the Chinese waist drum playing was elegant and beautiful. It was the first time they had seen it. They all said they loved it very much.

“Clarifying the Facts about Falun Dafa at Taiwan's Yehliu Geopark”

“Be Wary of Old Force Tricks”