(Minghui.org) Zhao Kuangyin (927 – 976 AD), who founded the Song Dynasty (960-1279 AD) and came to be known as Emperor Taizu of Song, went down in history as a decent and magnanimous ruler who always kept his word.

The following stories were taken from History of the Song Dynasty and notes from same period, which give us a picture of Emperor Taizu's charisma and appeal. 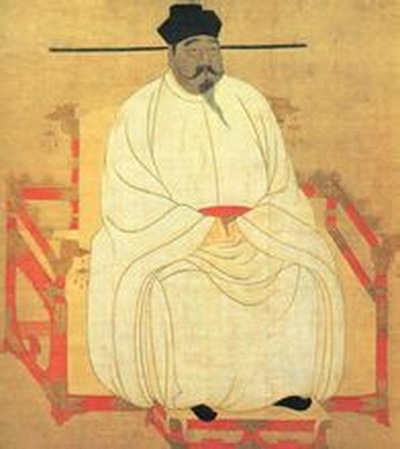 Painting of Emperor Taizu of the Song Dynasty

“Spared for the Sake of an Infant”

In the fourth year during the short-lived Later Zhou Dynasty (951 - 960 AD), the emperor ordered the military to besiege the Southern Tang City of Chuzhou, which is in today's Jiangsu Province. Zhang Yanqing, the Southern Tang general who defended the city, fought to the last man.

After the Later Zhou army broke into the city, Zhang led his remaining troops to fight in the alleys, until everyone was killed. Not a single soldier surrendered. The invading troops suffered heavy casualties.

Infuriated, the Later Zhou emperor ordered that all civilians in the city be killed, regardless of age or gender, in order to instill shock and fear among the rulers of the Southern Tang.

Zhao Kuangyin, a general normally in charge of palace guards, was leading the fight on the northern side of Chuzhou. Approaching a small alley, he saw the body of a young mother lying on the ground. Her head had been chopped off while she was breastfeeding her baby.

Sympathy overtook Zhao Kuangyin. He rushed a request to the emperor for the civilians to be spared. He held the infant in his arms and took the baby back to the troops. He then tried to find wet nurses to breastfeed the infant. Other residents of the lane narrowly escaped death.

In memory of Zhao, who had held onto affection and gentleness during intense warfare, the residents later changed the alley's name to “Spared for the Sake of an Infant.”

Chief Chef of the Imperial Kitchen

When Zhao Kuangyin was the top commander in charge of military and civilian affairs, he stayed in the home of an elderly lady named Li. She took good care of Zhao.

After becoming Emperor Taizu, he sent people to look for her, but she had passed away. Emperor Taizu located her son and took him in as chief chef for the imperial kitchen.

After some time, the chief chef, unhappy about his lack of promotion, turned in his resignation. Emperor Taizu told him, “You wouldn't even have been appointed to the position of chief chef based on merit. Official titles are supposed to be awarded to the virtuous and capable. Instead, I bestowed the position on you out of nostalgia, which was very unfair to those who rose in rank based on their merit. Why are you still dissatisfied?”

(Adapted from Collected Stories from Back Mountain, by Chen Shidao)

Song Bai, who was in charge of the Imperial Exam, took bribes from applicants, and was about to give favorable considerations accordingly. Knowing that the final rank would not be handed out fairly, Song worried about public complaints.

He drafted a list of winners, reflecting his preferences, and submitted it to Emperor Taizu for approval. He figured that people would not challenge him as much if the list was approved by the Emperor.

Instead of selecting the winner, the Emperor told him angrily, “I appointed you to hold the Imperial Exam. You're tasked with ranking the contestants. Why send the list to me? How would I know who qualifies and who doesn't? If there is public uproar after announcing the results, I will see to it that you're beheaded as an apology to the public!”

Justly frightened, Song ranked the applicants fairly, based on the exam results, before announcing them.

(Adapted from Comprehensive Mirror in Aid of Governance: Song Dynasty, by Sima Guang)

Liu Chang, before surrendering to the Song Dynasty, was the emperor of Southern Han. He used to give his subordinates he did not trust poisoned wine to get rid of them.

One day, Zhao Kuangyin called in officials for a banquet, and Liu was invited. Zhao poured Liu a cup of wine as a gift. This reminded Liu of what he had done in years prior.

Holding the cup of wine, with tears running down his face, Liu begged Zhao, “I know that I have committed crimes that are too grave to be pardoned. Now that Your Majesty has spared me, I would like to be a commoner to witness the grand period of peace and prosperity under Your Majesty's rule. I just dare not drink this cup of wine.”

Zhao laughed and replied, “I wouldn't mind putting my heart into another's chest so that he could feel my sincerity. How could I poison anyone like this?” He then took the cup from Liu and gulped down the wine before pouring Liu another cup.

(Adapted from History of the Song dynasty: Basic Annals of Emperor Taizu)

Night Visit to Prime Minister's Home During a Snowstorm

Emperor Taizu of the Song routinely visited his ministers in their homes. Prime Minister Zhao Pu did not dare to take off his official robe after returning home from imperial court, just in case Emperor Taizu made an unannounced visit.

One day it was snowing heavily with no sign of stopping, and the sun was going down. Zhao Pu was thinking that Emperor Taizu would most likely stop working because of the weather when he heard a knock at the door. Zhao was surprised to see Emperor Taizu standing in the wind blowing snow against his back. Emperor Taizu told him that Zhao Guangyi, the younger brother of the Emperor, was to join them.

Then the Emperor brought up the conquest of Northern Han. Zhao Pu suggested, “Northern Han serves as a natural barrier between the Song and the nomads on the northeast. If we take over Northern Han, we would be left alone to fend off the nomads. It is better that we conquer the south and then head toward Northern Han. Given its small size, there is no chance that it can put up much resistance.” Emperor Taizu laughed, “That is what's in my mind too! I just wanted to get your take on it.”

(Adapted from History of the Song dynasty: Biography of Zhao Pu)

“Changing the Environment at Work”