(Minghui.org) People from various walks of life gathered at Belmore Park in Sydney, Australia on December 12, 2015, to support the 200,000 Falun Dafa practitioners and their families who have decided to stand up for human rights by filing lawsuits against former Chinese dictator Jiang Zemin during the past few months.

Support for Human Rights and Lawsuits Against Jiang 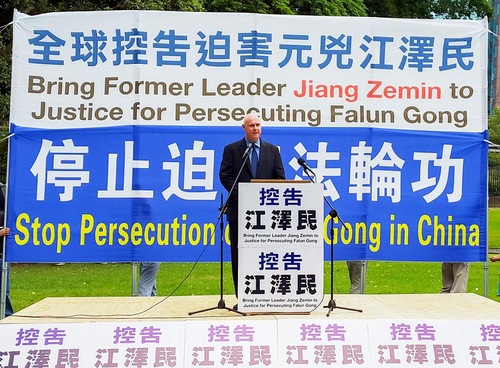 Mr. John Deller, spokesperson for the Australia Falun Dafa Association, talked about the lawsuits at the rally, “The rally today is supporting the over 200,000 Falun Dafa practitioners who have filed criminal complaints in China against former Communist Party leader Jiang Zemin, for his role in the persecution of innocent Chinese people who practice Falun Dafa.”

“Falun Dafa is recognized and welcomed around the world. Only in China are people tortured and killed for trying to be good people by following the principles of Truthfulness-Compassion-Forbearance,” Mr. Deller continued, “Canadian Prime Minister Justine Trudeau is reported to have raised the persecution of Falun Dafa with Chinese President Xi Jinping at APEC last month. The Australian government can align with the Canadian government to help raise a unified voice to end the persecution of Falun Dafa.”

Mr. Deller concluded by saying, “Australia would not be just ‘helping the Chinese people’. It would be truly helping Australians too – by speaking up for our sense of justice and a fair go. The Australian people can support bringing Jiang to justice, and also support the ancient values and morals of traditional Chinese culture - as they are universal, and can bring a spirit of harmony wherever they are accepted and understood.” 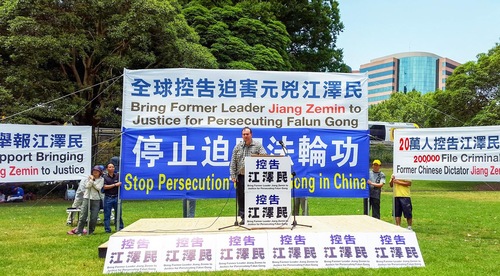 James Shaw, Parramatta City Councilor, said at the rally, “I think it is important that Jiang Zemin be held accountable for his actions and the serious allegations of his human rights abuses. Earlier this year, we had an SBS documentary about organ harvesting, and about how doctors and others working in the hospital system in China were talking about organ harvesting going on, matching the allegations.”

“The Australian government, and other politicians should be publicly stating the need for human rights to be a priority of the Chinese government, to protect the human rights of all its citizens, including Falun Dafa practitioners, and be held accountable for the human rights abuses. I'm glad to be here to support all of you today. Congratulations on the work you've done. I'll continue to lend my support,” Shaw added.

Admiration and Support for the 200,000 Brave Chinese People 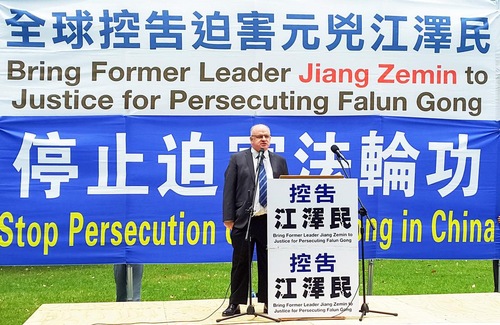 Councilman Andrew Wilson pays his tribute to those in China who sued Jiang.

Andrew Wilson, another councilor from Parramatta City, spoke highly of the lawsuits at the rally, and expressed his support. He said, “Anything we can do in our community to help the rest of the world, we should do, to support this great move in China to bring back the normal process of justice.”

Justice for Victims of the Persecution 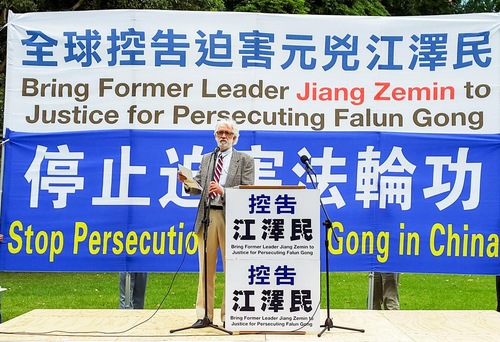 Human rights activist Bob Vinnicombe believes the victims of the persecution deserve justice. He said, “The rally today was a rally for justice for all persecuted people in Communist China, by supporting the lawsuits filed by Falun Gong practitioners and their family members against former Communist Party leader Jiang Zemin.”

Vinnicombe also strongly urged everyone at the rally to, “...go and talk to their members of parliament, to their local media, and to all aspiring political candidates. Tell them about the organ harvesting in China.”

Dr. Thang Ha, president of the Vietnamese Community in Australia New South Wales, sent a letter to the rally to voice his support. He said in the letter, “In the People’s Republic of China, members and practitioners of Falun Gong continue to suffer under a massive crackdown since 1999. The VCA-NSW wishes the Falun Dafa Association of Australia every success with its rally at Sydney’s Belmore Park.” 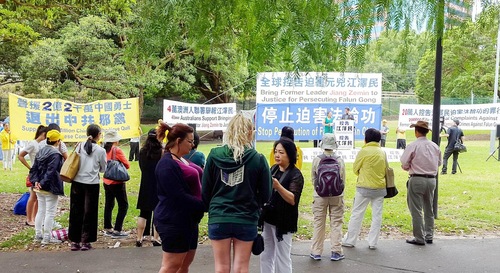 Passersby sign petition to support the effort to raise awareness of the persecution.

A student at University New Castle said that he had heard propaganda against Falun Dafa when he was in China. He decided to circumvent China’s Internet firewall and read overseas reports on the practice. He came to the rally to learn more about the persecution. After talking to practitioners, he decided to quit the Chinese Communist Party and its affiliated organizations.

A woman from China came to the rally and stood quietly to listen to the speakers. She signed the petition supporting the lawsuit and told the practitioners that she had already quit the CCP and its affiliated organizations. She raised her thumb to show her respect and admiration for the practitioners’ long-term efforts to end the persecution.

Jiang Should Be Brought to Justice 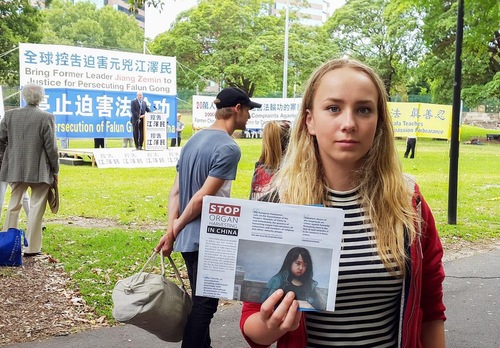 Christine Rucas is a student at Melbourne University who was visiting Sydney with her friend. She felt terrible after learning about the persecution. She said that everyone should have freedom of belief, and that Jiang should be brought to justice for what he did. She expressed hope that the practitioners will win the lawsuits. Before leaving, she said that she would put the information on her Facebook page and her essay on ethics, to let more people know about the persecution.