(Minghui.org) “Wow, 'Heaven Will Destroy the Chinese Communist Party!' We should have come earlier! Take some photos!” exclaimed a tourist from China who happened upon the Falun Gong practitioners' procession in Hong Kong on October 1, 2015.

October 1 is National Day in China. The Chinese Communist Party (CCP) designated the day as such when it seized power.

Many Chinese visit Hong Kong to go shopping and see the sights. To raise awareness of the CCP persecution of Falun Gong, practitioners held a march that day to “bring the culprit to justice and stop the persecution.” The procession started at Cheung Sha Wan Sports Center.

The Divine Land Marching Band led the way, followed by six distinct sections extending over a mile: “Bring the Culprit to Justice and Stop the Persecution,” “Protest the Persecution Peacefully and Rationally,” “Righteousness Overcomes Evil" “The CCP Is the Cause of Many Problems,” “Disintegrate the CCP and Bring the Culprits to Justice,” and “Falun Dafa Is Great.” Many people stopped to watch. 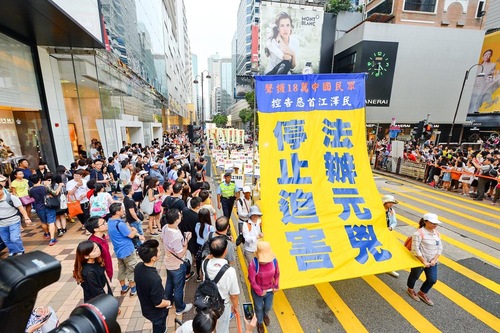 “Everyone Knows the CCP Is Bad.” 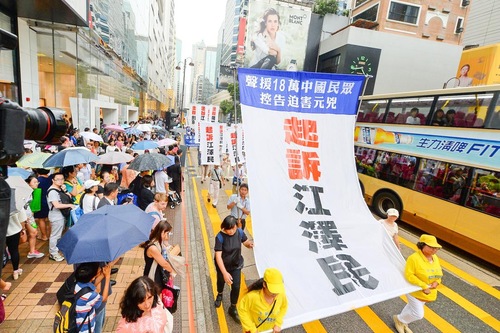 “My son already has a copy,” said a lady to the practitioner distributing Falun Gong newspapers to spectators. When the practitioner explained briefly what was in the newspaper, the lady said right away, “I will read it. I will ask my son to read it carefully. Many Chinese people hate the Party. Everyone knows the CCP is bad!”

Tourists from China Get the Message and Local Residents Offer Support

“After I came to Hong Kong, I noticed that Falun Gong is quite different from how CCP propaganda portrays it,” said a Chinese tourist who stepped forward to get a Falun Gong newspaper.

“The Party is bad. There is almost no democracy in Hong Kong now that it is under CCP control,” said a local resident indignantly. “I support you!” He also took a Falun Gong newspaper.

The procession made its way down Nathan Road, Jordan Road, Canton Road, and ended up at Star Ferry in Tsim Sha Tsui more than three hours later.

Members of the CCP-sponsored Hong Kong Youth Care Association took to the sidewalk with loudspeakers, yelling and cursing at the procession. Many people expressed their disgust at their behavior.

“The CCP's control of Hong Kong is becoming deeper. I worry about the future of Hong Kong,” said a Japanese tourist who videotaped the march for quite a while.

Local resident Mr. Ke said indignantly, “They shouldn't use loudspeakers to make noise and fill the air with curses. Such a disruption. Falun Gong practitioners are peaceful and quiet. I asked the members of the Association to respect others and not be so loud. They acted like they were going to hit me. They are very rude.” 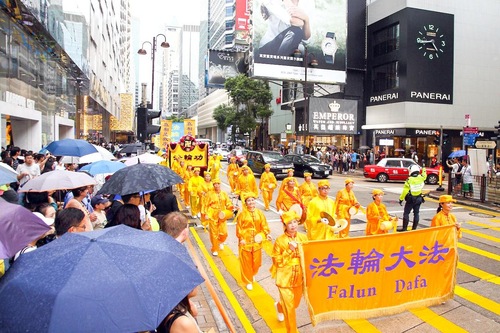 Benjamin James from England has lived in Hong Kong for four years and seen other Falun Gong activities. He said, “Falun Gong is peaceful and reasonable. They are just expressing their request. But those members of the Youth Care Association are yelling and cursing. They shouldn't do that.”

“My Understanding of Minghui's Editorial “Notice Regarding Suing Jiang””