Sydney Resident: “Jiang Zemin Should Be Brought to Justice”

(Minghui.org) Banners with pictures depicting the brutal persecution of Falun Gong practitioners in China were lined up to create a "Great Wall of Truth" in Campsie, a large commercial and administrative center outside of Sydney, on October 25, 2015.

It was another effort on the part of Falun Gong practitioners to raise awareness of the state-sanctioned harvesting of organs from living practitioners in China. They also collected signatures of support for the more than 190,000 Chinese people who have filed lawsuits against former Chinese dictator Jiang Zemin for initiating the persecution of Falun Gong. 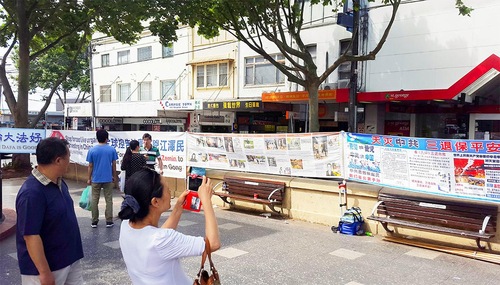 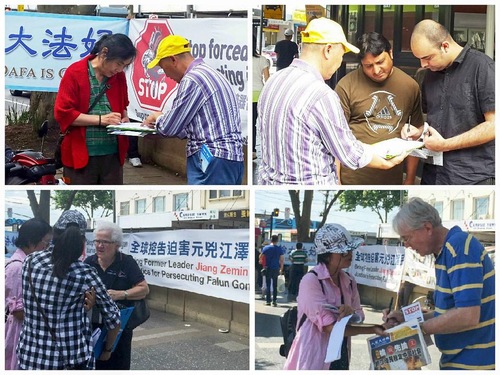 Practitioners' "Great Wall of Truth" and signature drive in Campsie, a large commercial and administrative center southwest of Sydney
Elderly Woman: Jiang Zemin Should Be Brought to Justice 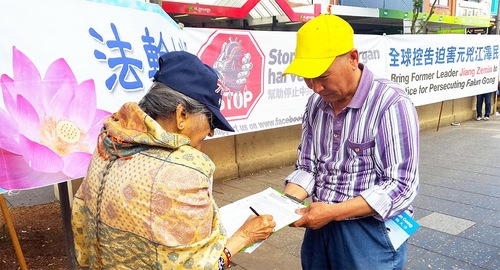 “What's happened?” asked an 85-year-old Indian woman as she passed by. She was stunned to hear that the Chinese Communist Party (CCP) has been persecuting the practitioners of Falun Gong, an ancient spiritual belief that follows the principles of Truthfulness-Compassion-Forbearance, for over 16 years.

“We should call for an immediate end to this persecution,” said Ms. Raj. “Bring the chief culprit to justice. It should be done.”

Local Resident: What You're Doing Is Great 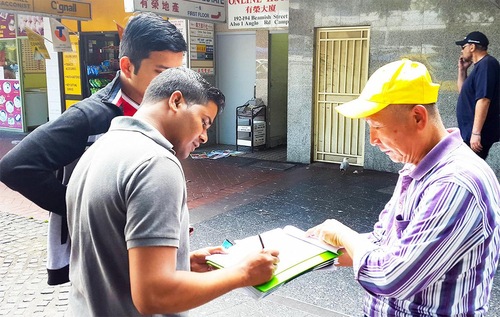 Mr. Vibek Singh and his friend both signed the petition calling for an end to the CCP's crime of harvesting organs from living Falun Gong practitioners in China and to bring Jiang Zemin to justice.

“I'm sad that Falun Gong practitioners are being so brutally persecuted,” said Mr. Singh. “What can I do to help them? You should bring Jiang Zemin to justice. It should have been done before now.”

“You are doing a great job!” he added.

Falun Gong Practitioners Should Not Be Persecuted 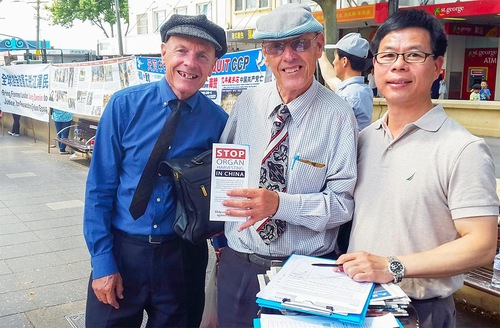 “I hope that these peaceful practitioners are not still being persecuted,” said Mr. Rasion, “They live by Truthfulness-Compassion-Forbearance and do no harm. Why should they be persecuted?”

Vietnamese: “I Believe Good People Will Ultimately Be Rewarded” 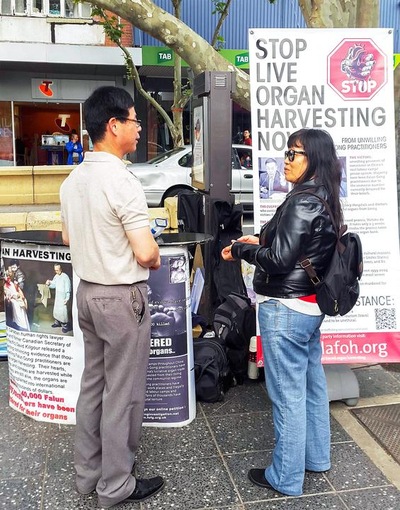 Ms. Zavi Khan from Vietnam lingered in front of the display for a long time and talked to a practitioner to learn more. “I've seen you hold activities to raise awareness of the persecution many times. Why is the persecution still going on?” she asked. “Why do I still see this? The persecution has lasted for 16 years? My God! I believe good people will ultimately be rewarded.”

“Attachment to the Time When the Fa-rectification Will End”