(Minghui.org) Today's news from China includes persecution that took place in 11 cities or counties in 4 provinces. According to this report, five practitioners were subjected to mistreatment during detention, at least 7 practitioners were illegally arrested. 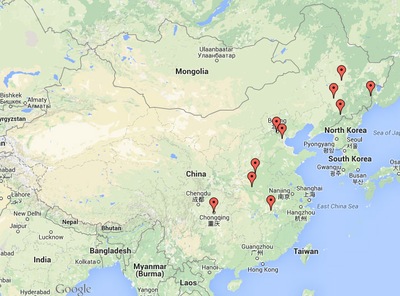 Mr. Wang was held at the police station for two days. His family picked him up on January 9.

Ms. Ren Xianglian from the Yubei District was arrested by plainclothes officers when she distributed informational brochures about Falun Gong on January 6, 2015. Officers from the Shuangfeng Police Station later searched her home. She is being held at the Yiwanshui Detention Center in Yubei.

Ms. Chen Li from Zaoyang, Hubei Province, went to Nanyang Oil Field in Henan Province and talked to people about Falun Gong on January 4, 2015. Officers from the Oil Field Police Department arrested her, and she is now held at a detention center.

Ms. Wang Shuxian and Ms. Wang Xiufen went to the Mudanjiang Prison on January 9, 2015, and picked up Mr. Cao Wenbo, who had been detained there. On their way home, the Xieyehe police cut them off and took both ladies to the Jiangnan Police Department in Mudanjiang. They were transferred to the Mudanjiang Detention Center for a 15-day term.

Mr. Wang Jinrong from Ji'an was arrested by plainclothes officers when he talked to people about Falun Gong on January 10, 2015. He is held at the Changliu Detention Center in Tonghua.

Ms. Shi Chenglian is from Goutou Village, Niudaokou Town, the Baodi District, Tianjin. She went to Shigezhuang Township and distributed informational materials about Falun Gong on January 11, 2015. Officers from the Niudaokou Police Station then arrested her.

Mr. Liao Yuanhua was arrested on December 28, 2014. He is in the Banqiao Brainwashing Center in Hubei Province.

Ms. Liu Zhenli was previously held at the Wuhan No. 1 Detention Center for eight months. She has been transferred to Baofenglu Women's Prison in Wuhan.

Ms. Mu Suxia was arrested on August 5, 2013, and held at the Zhengzhou Detention Center. She was sentenced to three-and-half years in prison in Gongyi Court on March 11, 2014. She was still held in the detention center after her sentencing.

Ms. Mu became very ill and was taken to the hospital. She was diagnosed with breast cancer and was released on bail for medical treatment. She passed away on December 22, 2014.

Ms. Fan, 50, was arrested when she talked to people about Falun Gong in early November 2014. She was beaten to death while being detained.