(Minghui.org) Today's news from China includes persecution that took place in 9 cities or counties in 8 provinces. According to this report, 15 practitioners were subjected to mistreatment during detention, at least 3 practitioners were illegally arrested. 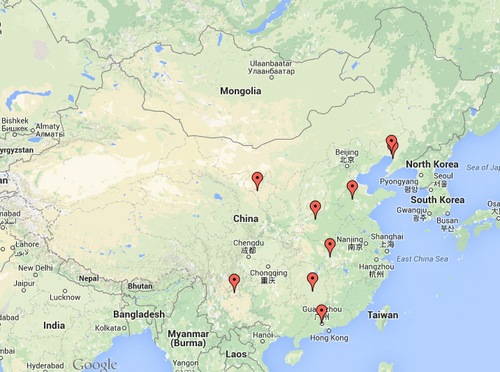 1. [Jinzhou, Liaoning Province] Mr. Wang Keyu Passes Away as a Result of Persecution

Officers from the local Nuerhe Police Station went to Mr. Wang's home and harassed him many times during March and April 2014. Mr. Wang was forced to become homeless in May 2014, to avoid further harassment. The police nonetheless kept going to his home, and harassed his family while he was away.

Yang Zhigang, along with seven or eight officers from the Nuerhe Police Station, broke into Mr. Wang's home and arrested him on April 21, 2013. He was also fined.

Mr. Wang was arrested by officers from the Tahe Police Department on September 25, 2012, and held in a forced labor camp for one year.

Mr. Song Guangrong was arrested on December 4, 2014, and is being held at the Luoyang Detention Center. His family is not allowed to visit him. He has become emaciated as a result of persecution.

Ms. Xie Kunxiang was arrested when she was distributing informational materials about Falun Gong on the morning of December 31, 2014. Her home was ransacked that afternoon. The police confiscated her computer, cell phone, Falun Gong informational flyers, etc. Ms. Xie is being held at the Liwan District Detention Center.

The Qidong Court secretly sentenced Ms. Li Yingchun, Ms. Li Baozhen, and Mr. Deng Shunhua to three years of imprisonment. Their families were not informed of the trial.

Ms. Wei Liping is being held at the Yingkou Detention Center.

Ms. Tao Shuanghui, about 50 years old, has not returned home since December 31, 2014. Her son went around to inquire about her whereabouts. He eventually learned that his mother had been arrested by officers from the Ronghuajie Police Station, for talking to people about Falun Gong. Ms. Tao is being held at the Erzhigou Women's Forced Labor Camp in Dongxihu for a 15-day term.

Ms. Wang Shunqin was arrested on January 2, 2015, by officers from the Yingshui Police Station when she distributed calendars which contained words about Falun Gong in a rural area. She was taken to the Domestic Security Division of Zhongwei City Police Department, then transferred to the Yingshui Detention Center. Where she is still being held.

Ms. Wu Dunqiong, who is in her seventies, was arrested on July 9, 2014, at home, by officers from the Yundian Township Police Station. Her home was ransacked, and she was taken to the Huili Detention Center. Two days later, Liu Jianping, chief of the Yundian Police Station, led officers to her home again, and ordered her family to sign the arrest warrant.

Ms. Wu's husband and daughter went to the relevant department on January 5, 2015, and learned that Huili Court would try Ms. Wu on January 6.