Torture Methods: Abuse of Sight and Hearing (Part 5 of 5)

(Minghui.org) Editor's note: Many Falun Gong practitioners released from the Chinese Communist Party's detention centers, prisons, or police stations have been tortured in a variety of ways. This report, the last one in our new five-part series on torture, describes how officials torture Falun Gong practitioners' hearing and sight in ways that far exceed the scope of what a human can endure both physically and mentally.

According to the World Health Organization (WHO): “Excessive noise seriously harms human health and interferes with people’s daily activities at school, at work, at home and during leisure time. It can disturb sleep, cause cardiovascular and psycho-physiological effects, reduce performance and provoke annoyance responses and changes in social behavior.”

Many practitioners have suffered hearing loss after being forced to listen to loud and high-pitched noise for extended periods of time. Some even have become mentally disordered.

Practitioner Mr. Xu Qitian was arrested in 2001 and held in the Shenzhen City No. 2 Detention Center. The guards handcuffed him to a bench, put two loudspeakers close to each ear, and turned up the volume. He developed an infection in both ears, and due to the lack of treatment, he has lost hearing in his left ear.

Mr. Liu Peng, a practitioner from Shanghai, was sentenced to five years in prison in 2008. He was held at the Tilanqiao Prison in Shanghai. Guard Wang Haocheng ordered inmates to torture him. He was forced to stand facing a wall from 7:00 a.m. to 9:00 p.m. They also placed loudspeakers next to both his ears in a small room and turned up the volume. He had hearing loss in both of his ears. 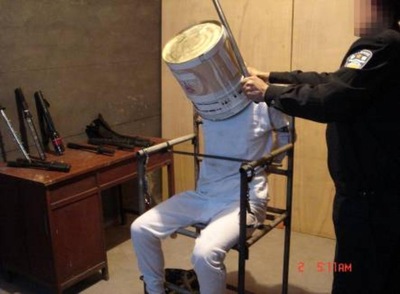 Torture reenactment: Pounding on a metal bucket placed over a practitioner's head

Ms. Zheng Hua, a practitioner from Chifeng City, Inner Mongolia Autonomous Region, was arrested in the winter of 2001. The police tied her to a metal chair, and pulled her hair and slapped her. Seeing that she remained silent, they handcuffed her so tightly that her wrists were damaged. The officers then wrapped her fingers with wires and shocked the wires with electric batons. Finally, they put an metal bucket over her head, then beat at the bucket while shocking her with electric batons.

Liu Zhanzhong, a guard at the Tiebie Prison in Changchun City, Jilin Province, ordered inmates to torture practitioners in an effort to “transform” them. Inmates welded two iron tubs together, each weighing over 300 pounds. They placed a door on the welded tubs and forced a practitioner into it. The inmates closed the door, and then pounded on it with wooden clubs.

Ms. Xuan Xiaomei, a practitioner from Suzhou City, Jiangsu Province, was arrested by officers from the Suzhou 610 Office in October 2013. She was taken to the Shangfangshan Brainwashing Center, where Zhou Wenqiu, deputy head of the 610 Office and head of the Domestic Security Division, pressed himself up against Ms. Xuan before a room full of people. At the same time he yelled obscene and offensive language into her ears.

“I can't repeat the dirty words that man said to me. It would make me feel as if I were committing a crime,” said Ms. Xuan.

Ms. Xu Qingyan was held in Masanjia Women's Forced Labor camp. Guards there kept her in a small cell because she shouted “Falun Gong is good” in the camp dining hall. Guards then played an advertisement for treating male sexually transmitted diseases over a loudspeaker around the clock into her ears. A few days later, Ms. Xu exhibited symptoms of heart and nervous system problems. 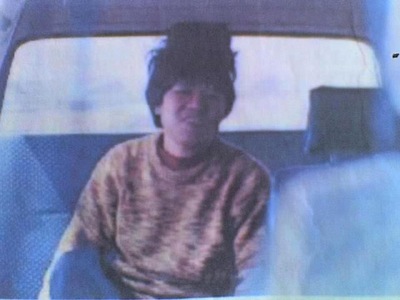 Recordings of Shrieks and Howls

Ms. Mo Qingbo, a practitioner from Nanning City, was held in a confinement cell at the Guangxi Women's Forced Labor Camp for refusing to transform. For three months, the guards played wild shrieks and ghostly howls throughout the day and night to deprive her of sleep. When she was let out of the small cell, she appeared mentally disoriented.

Guards at the Gaoyang Labor Camp in Hebei Province took female practitioners individually to the cemetery late at night. The practitioners were forced to kneel and tied to trees. The guards put earphones on them and played recordings of shrieks and howls.

Mr. Guo Xiaojun, in his 40s, a former teacher at the Department of Computer Science at Jiaotong University in Shanghai, was arrested on January 7, 2010. To try to gain information about other practitioners, the police beamed bright lights into his eyes. He suffered blurred vision and intermittent blindness.

He found himself unable to see during several instances every month. His family learned from an eye specialist that Mr. Guo's symptoms are known as “retinal artery spasm.” Frequent occurrences of retinal artery spasms can cause vascular clogging in the eyes, which may result in permanent blindness if not treated.

Guards at the Xishanping Labor Camp in Chongqing forced practitioners to sit on the edge of a bed. Then one guard would pulled a practitioner's hair to raise his head, another would open his eyes by hand, and two more would force him to look at pornographic pictures. Someone holding a wooden stick would stand behind, ready to hit the practitioner at any time.

Forcing Practitioners to View Pictures of Themselves Nude

A female practitioner, about 30, was held at the Shijingshan Detention Center in Beijing. Male guards stripped her naked and tied up her four limbs after she was severely tortured.

The guards then took nude pictures of her and made her look at them. The guards cursed, humiliated, and threatened her. They said that they would publish her nude pictures.

III. Forcing Family Members to See and Hear Each Other Being Tortured

Mr. Chen Yunchuan was from Beixinbao Township, Hualai County, Hebei Province. He; his wife, Ms. Wang Lianrong; and their eldest son, Chen Aizhong, were taken to the police station on October 13, 1999.

The police wanted to locate their second son, Mr. Chen Aili, so they took turns beating the father, mother, and oldest son in turn and forcing the other two to watch.

“Sending Forth Righteous Thoughts in Close Proximity to Prisons”

“Recalling My Experience in Attending Master Li's Lectures in 1994”