Jobs in China's “610 Office” Are Regarded as “Death Traps”

(Minghui.org) Meng Zhaoqing (孟兆庆), head of the Ning County 610 Office in Gansu Province, died in a motor vehicle accident on December 23, 2011. The police van he was riding in crashed into a truck, and the fuel tank of the van suddenly caught fire. The van belonged to the criminal court of Ning County, where Meng was the presiding judge. 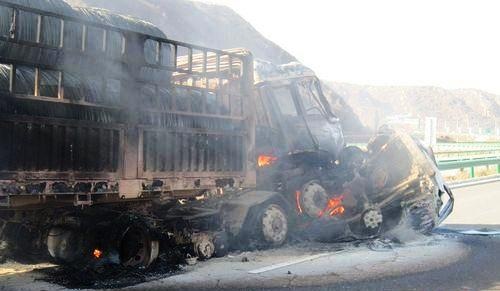 The scene of Meng Zhaoqing's accident

Elderly female practitioners in Ning County have also been subjected to “tiger bench” torture for over 10 hours.

The 610 Office was established on June 10, 1999, hence the name “610.” With the directives of the then Chinese Communist Party (CCP) leader Jiang Zemin, the power of the 610 Offices overrides the Chinese law and constitution. 610 Office personnel direct the local police departments and Procuratorate to persecute Falun Gong practitioners.

As a result of practitioners' persistent efforts to raise awareness of the persecution, many Chinese have learned that the persecution is wrong, opposite to what the propaganda broadcasts.

The unnatural deaths or downfalls of many 610 officials are viewed by many as karmic retribution – payback for their wrongdoings. Traditional Chinese beliefs hold that such retribution may even come directly to immediate family members.

Once considered as coveted positions that guarantee extra income, positions at 610 Offices are increasingly regarded as death traps and are no longer sought after.

Liu Wuqing (刘五庆), party secretary of the Qingyang City Political and Legal Affairs Committee (PLAC) and head of the Qingyang 610 Office in Gansu Province, died in August 2006 after suffering from long-term cancer.

The head of the Qingyang 610 Office Men Yijing (门懿镜) and a member of his staff, Bai Weiquan, (白维权) both died in a car accident on their way to force practitioners to “transform”. The car flipped over.

Director of the Meihekou City 610 Office Wang Funian (王福年) and his co-workers Zhou and Liu Peng (刘鹏) died in a car accident while on their way to arrest Falun Gong practitioners on November 8, 2004. Their car fell off a bridge.

Zhang Shiming (张石明), first director of Huanggang City 610 Office, died from a heart attack on February 13, 2005, when he was 48. Wang Kewu (王克武), Huanggang 610 Office chief, developed liver cancer his second year at the job and died in April 2005.

Ding Xinfa (丁鑫发), deputy chief of the Jiangxi Province Public Security Bureau was is in charge of persecuting Falun Gong. He was sentenced to life imprisonment in 2007.

Xu Xiaogang (徐小刚), director of the Jiujiang City 610 Office was sentenced to 17 years.

Peng Jinsheng (彭金生), director of Jiujiang 610 Office died in a car crash in 2002 when he was on the way to arrest Falun Gong practitioners.

The first director of Jiujiang County 610 Office Li Jianhua (李建华) died of a sudden illness at the end of 2007.

Wang Zhijie (王志杰), former political Commissar and head of the 610 Office of Suihua City died from cancer on April 14, 2009.

Liu Weidong (刘维东), deputy director of Qixia City in Shandong Province died from colon cancer in February 2012, when he was 50.

Li Qun (李群), head of the Yakeshi City 610 Office died from cancer. His replacement, Lin Haiqing, (林海清) has a terminal disease as well.

The father of Jiang Yongzhong (江勇忠), staff at the Hunan Province 610 Office, became paralyzed and his mother became blind.

Wang Zhongjun (王忠俊), the head of Ding'an County 610 Office once said: “You Falun Gong people talk about retribution. Where is the retribution? I have arrested lots of Falun Gong practitioners, and I still have a good life and good health. I haven't seen the retribution.” Within less than a month of saying this, his only son died from a gas leak and his wife died after jumping into a well on May 8, 2004.

“Letting Go of Attachments; Cultivating in the Workplace”