Torture Methods: How Guards Torture Practitioners With Their Bare Hands (Part 1 of 5)

(Minghui.org) Editor's note: Many Falun Gong practitioners released from Chinese detention centers, prisons, and police stations have recalled being tortured in an astounding variety of brutal ways. This report, the first in our new five-part series on torture methods, describes how officials have used their bare hands to harm practitioners.

Beatings are one of the most common forms of torture inside China's prisons. Guards often beat Falun Gong practitioners, attempting to force them into giving up their beliefs.

While in many cases beatings are coupled with other forms of torture, the focus of this article is on types of torture carried out using just the hands.

Targeting sensitive parts of the body or injured areas, torturing for long periods of time, and the use of excessive force are common techniques that will be covered.

To deprive Mr. Ding Lihong of sleep, guards at Shijiazhuang Brainwashing Center hit his head with anything they could find, beat his legs, twisted his ears, and pulled his eyelids. In particular, guard Zhao Juyong pinched his eyeballs and gouged his eyes. Within nine months Mr. Ding died due to mistreatment.

Guards at Hegang Forced Labor Camp pinched and pulled Mr. Sun Fengli's penis, which became badly swollen and very painful. He had difficulty urinating, excreting, and walking. He was humiliated by the inmates.

Guards from Wanjia Forced Labor Camp used a variety of methods to torture Ms. Chen Yali. They squeezed her body from the sides of her lower back, dug between her ribs, and pinched her nipples. Ms. Chen resisted the persecution, but was slapped in the face. She kept shaking after the torture.

Guards Hit Mr. Liu Kaifang on the Tendons of His Legs

At Yongchuan Prison, the guards punched the tendons on Mr. Liu Kaifang's legs, causing them to bruise and swell. They also tickled the soles of his feet as a means of torture.

Poking, Slapping or Pulling Hair from Sensitive or Private Parts

In some cases, the guards poked the practitioners' ears or nostrils with their fingers, and even shoved their fists into a female practitioner's vagina.

At Weifang Brainwashing Center, Fu Jinbing and others slapped the practitioners on their heads, ears, chests, and backs.

Mr. Zhou Jingcheng Slapped in the Face More Than 500 Times 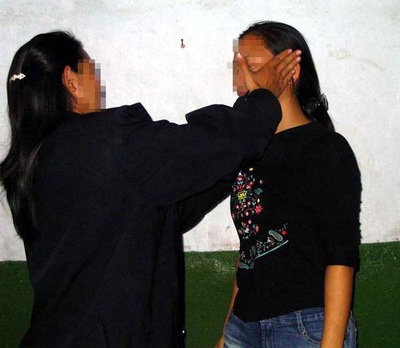 Mr. Zhou Jingcheng has been arrested and detained eight times, sentenced to forced labor twice, and to imprisonment twice. To try to force him to give up practicing Falun Gong, the prison guards and inmates severely beat and tortured him. They once slapped his face more than 500 times.

Mr. Li Deshan Slapped in the Face More Than an Hour Every Day 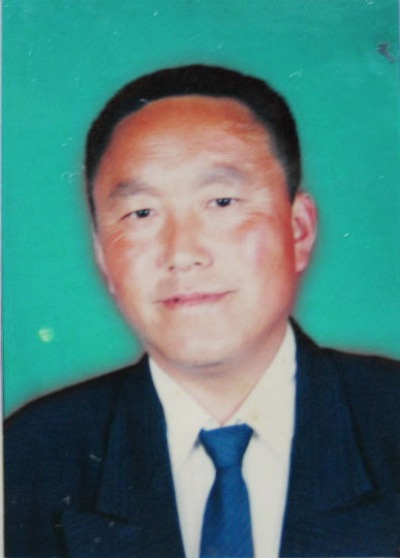 At Wangcun Forced Labor Camp, a guard slapped Mr. Li Deshan's face for more than an hour every day for six months. The physical and mental pressure caused him to have a mental collapse. He died in extreme pain in August 2002, leaving behind his wife, underage children, and an elderly mother.

Slapping the Forehead for a Long Time

Guards at the Fushun Forced Labor Camp grabbed practitioners' hair and slapped their foreheads for a long time, bruising their eyes.

When Ms. Tan Yanling went to the Dongshan Police Station to ask for the return of items confiscated from her house in 2013, officer Jin Weiqi pinched her arm so hard that it turned black and blue, and the muscles froze up. Her arm has yet to recover. 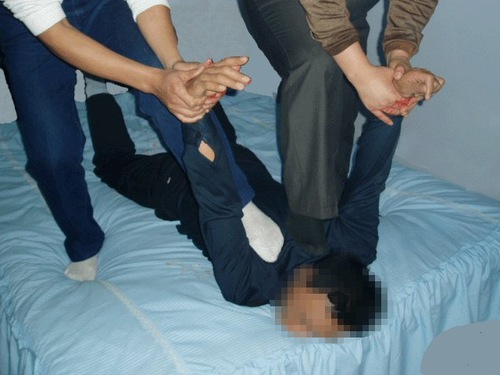 Because she refused to wear the prison uniform, guards at Heilongjiang Women's Prison broke Ms. Li Yushu's thumb and tied her onto the bed for a long time.

Ms. Cao Guilian, in her forties, was arrested at home. In addition to beating and stepping on her, police officers Deng Jianming and Li Yingbin threw Ms. Cao from upstairs multiple times.

Reenactments of Other Forms of Torture Using Excessive Force 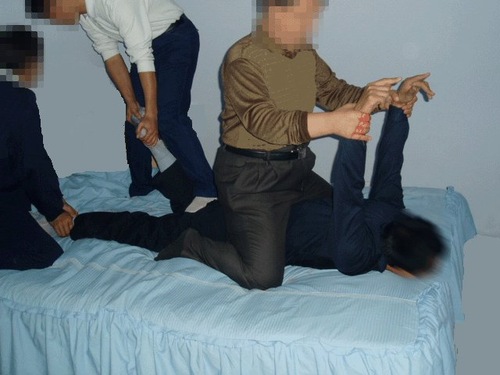 Torture reenactment: Pushing the arms like rowing a boat 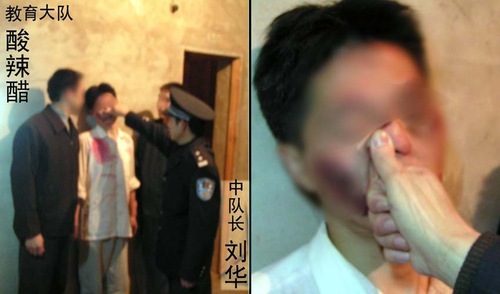 Torture reenactment: Pressing on the nose 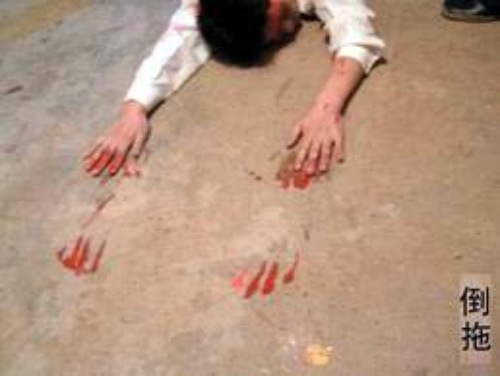 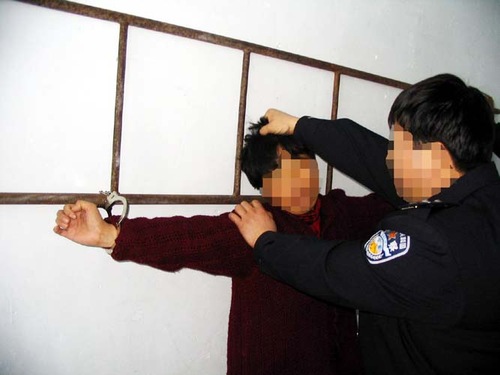