The documentary features Gao Zhisheng, who was targeted by the Chinese regime because he strongly supported persecuted Falun Gong practitioners. He was released on August 7, 2014, after being jailed for three years.

Greek journalist Sotiris Skouloudis, stated, “This movie was very strong, because it showed that Falun Gong practitioners in China do not even have the ability to defend themselves by the law.”

“What the man in the documentary tried to do as a lawyer—and we saw what happened to him—is proof that law, and basic human principles and rights are being oppressed within China,” he added.

Sotiris further said, “Falun Gong, as far as I know, is nothing more than meditation, a good practice which helps health, and the people. There is no reason at all to have this crime against humanity that is happening in China. This is very shocking, and we should all spread the word, especially as journalists, so that someday soon, an international election should be taken against the communist party.” 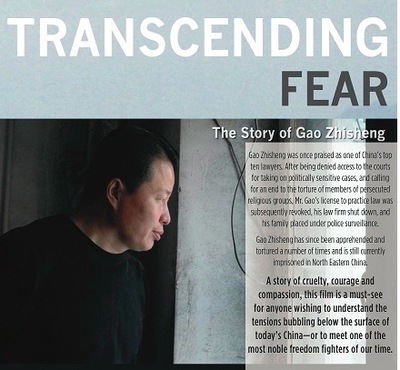 Garry Mann, a practicing lawyer and mentor, was also in attendance. When asked if he knew about Falun Gong, Garry said, “No. First time. I'm very impressed with them. It's an amazing story. It'd be a very good film for a film festival. And I was thinking it'd be good. We train young lawyers; we thought it'd be a good film to show them... It's a very powerful film for lawyers, no doubt about that.”

Among the audience was also a young man named Jerome Chang Meng Hine. He told of how he found out about the screening, “…because I want to go to China, and somehow I found and heard about this movie. I came along because I wanted to know what's going on in China.” Although complimentary tea, coffee, and savory foods were available, Jerome didn’t have any appetite after seeing how Gao had suffered. “I'm emotionally shocked. If I can explain that, I'm even losing my words. I didn't expect that.”

Sarah, a law student at Victoria University, wants to concentrate on Human Rights Law after she graduates. She said, “That's why I came here. I'm studying human rights as a unit right now, I find it very interesting.”

When asked about which part in the documentary was most touching, Sarah commented, “The graphic aspects of the brutality that goes on, and the fact that he [Gao Zhisheng] made it clear that these are the people that are representing the government that are doing these things [acts of persecution].”