(Minghui.org) Many Chinese people misunderstand why Falun Gong is being persecuted. Since so many have no way to access information from the outside world, they listen to and even believe the Communist Party's lies. In order to help people understand Falun Gong and the persecution, practitioners have been producing informational materials to explain the situation and distribute them to the general public.

Practitioners Mr. Zhang Jun and Mr. Ming Shaolin from Sichuan Province were (illegally arrested}} while handing out these materials in Nanchong City on April 18, 2014. They face court trials on September 5, 2014.

Yang Zhiliang, deputy head of Longpan Town Police Station, officer Xian Ting and others participated in the arrest. Police confiscated all their materials and their motorcycle. The two practitioners were brutalized during the interrogation at the police station.

Mr. Zhang and Mr. Ming were transferred to Nanchong City Detention Center the next day, April 19, 2014. They launched a hunger strike to protest this illegal detention. Police beat them with rubber batons. They also tortured them by force-feeding.

Mr. Ming was in serious condition after being tortured, but the police refused to release him. Both practitioners are still detained in Nanchong Detention Center. 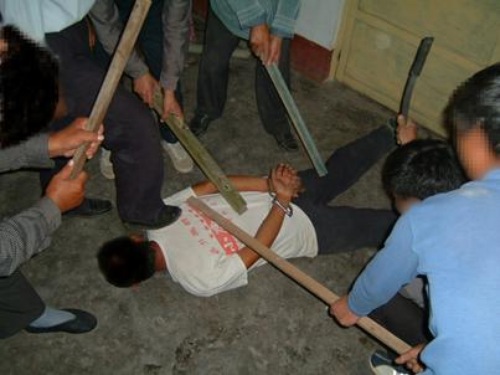 Mr. Zhang’s parents hired a lawyer to defend their son, but the police denied a first meeting between the lawyer and Mr. Zhang. It was the lawyer’s perseverance based on the law that forced the police to allow a meeting the next day.

“Imprisoned for Talking to People about Falun Gong”