(Minghui.org) The Chinese Communist Party (CCP) has come up with all manner of torture methods to force Falun Gong practitioners to renounce their belief. Dragging practitioners down the stairs is a common occurrence in Chinese detention centers, prisons and forced labor camps.

Ms. Zhu Xiyu, a practitioner and a Korean minority from Yanji City, Jilin Province, was detained in the Heizuizi Women's Forced Labor Camp in Jilin Province in November 2003. A group of prison guards dragged her by her arms from the sixth floor to the ground floor many times. After that she was dragged to the prison workshop, a distance of about 100 meters, injuring her back. This was repeated over the course of many days. 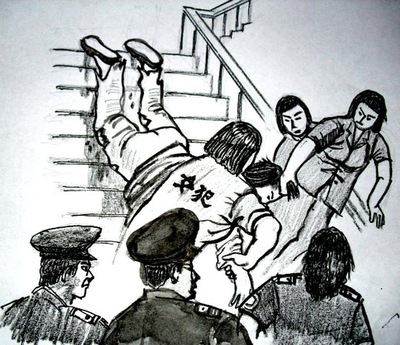 Torture illustration: Dragging down the stairs

Realizing that their cruel beatings couldn't make Ms. Wang Xia renounce Falun Gong, four inmates in the No. 1 Women's Prison of Inner Mongolia dragged her from the third floor to the ground floor and then cruelly beat her in the yard. They inserted a needle into her fingernail and heated the needle with a flame.

Ms. Wang, from Inner Mogolia, had been sentenced to 7 years in prison in December 2002. 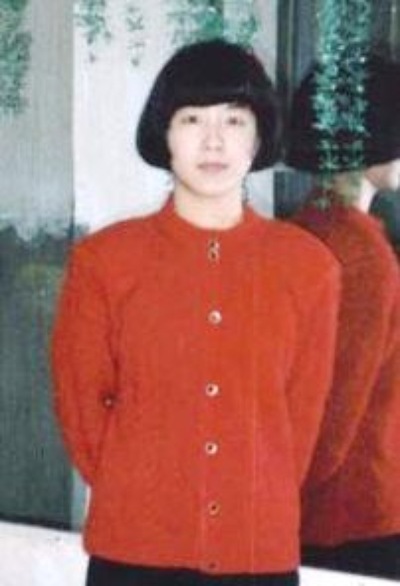 Ms. Wang Xia before she was tortured

Ms. Zhu Guilin was dragged from the third floor to the ground floor daily for many days in June 2005 in Baimalong Women's Forced Labor Camp, when she went on a hunger strike to protest the persecution.

She was once dragged over a number of steps, with her head suspended about 30 cm above the ground. Zhu Mingqiao, an inmate, kicked her head. Ms. Zhu's head hit the ground and she fell unconscious. She ended up with an egg-sized bump on the back of her head.

Guards at Sanshui Forced Labor Camp ordered three inmates to drag Ms. Chen Shaoqing from the second floor to the ground floor and then to a building where they held practitioners, a distance of 300 meters. She once rolled down the stairs when they let go of her, injuring her head.

Ms. Chen was an elementary school teacher. She was taken to the Sanshui Forced Labor Camp in Guandong Province in March 2003.

Seized by the Hair and Dragged Downstairs – Two Examples

Ms. Ding Yan was dragged by her hair and arms from the third floor to the first floor in Taihang Prison. The four inmates responsible then beat her.

Ms. Ding was arrested for speaking at a press conference in Beijing three months after the persecution of Falun Gong began in China in 1999. She was transferred to Taihang Prison in Hebei Province in the summer of 2000. 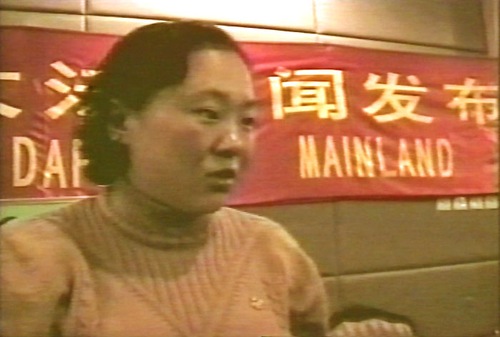 Ms. Ding Yan at the press conference in Beijing on October 28, 1999

Ms. Liu Xiaorong, a doctor specializing in medical tests at the Longhua County Hospital, was taken to the Shijiazhuang No. 2 Prison. In May 2001, guards ordered four inmates to grab Ms. Liu's hair and arms and drag her down the stairs. They were also told to kick and hit her and to drag her to the prison workshop hundreds of meters away. Gagged to keep her quiet with a filthy towel, Ms. Liu was tortured liked this daily. Her blood stained her clothes and the ground. She was seriously injured by the abuse.

Mr. Yu Ming, a dress shop owner from Shenyang City, was arrested and taken to the No. 2 Division of Tuanhe Forced Labor Camp in March 2001. He was verbally abused and beaten by Ni Zhenxiong, deputy head of the division. Mr. Yui grabbed the stair rail and refused to follow orders. Ni handcuffed Mr. Yui to the rail and shocked him with an electric baton. Mr. Yu still refused to comply. Ni then released his hands, seized his ankles, and dragged him face down from the second floor to the ground floor and then to the prison clinic. 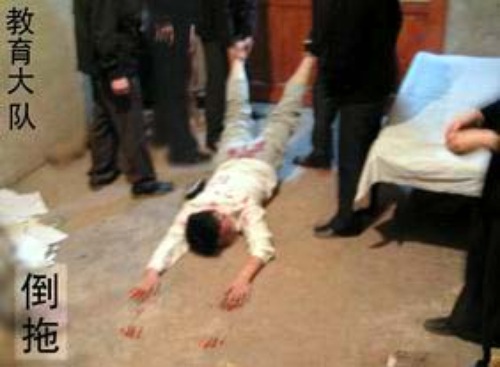 Torture reenactment: Dragging by the feet

Mr. Zhao Fei from Dalian, Liaoning Province, was taken to the notorious Masanjia Forced Labor Camp in September 2007. After going on a hunger strike Mr. Zhao became too feeble to walk. Guards ordered inmates to drag him by his feet from the fourth floor to the ground floor to the cafeteria and back after eating, three times daily for more than ten days. The ground was red with Mr. Zhao's blood.

Ms. Xin Shuhua was held in Masanjia Forced Labor Camp three times. In December 2005, the guards stripped her, locked her in a restroom, and handcuffed her to a radiator for 60 days. They opened the window on cold winter days.

They took Ms. Xin to the cafeteria handcuffed and in shackles by dragging her downstairs by her shackled feet, face up, injuring her head. After eating, the guards dragged her upstairs face down by holding her handcuffs. She was tortured like this three times daily. The 300-meter-long pathway to the cafeteria is paved with little stones. Ms. Xin was severely injured and her blood stained the stones.