Handcuffs and Shackles Connected In Front

Practitioner Mr. Jin Jilin, a farmer from Jinya Village, Jinya Town, Yuzhong County, Lanzhou City, Gansu Province, suffered from the brutal torture of “handcuffs and shackles connected in front” at the Lanzhou Prison in November 2003. The shackles used by Lanzhou Prison guards were made of four steel rings which were each three centimeters thick. Two rings were overlapped and welded together to make a heavy ring. They shackled the rings on the victim's feet and then used a rivet to lock them. The handcuffs were two rings made of steel, 5 centimeters wide and 0.6 centimeter thick. The practitioners' hands are put inside the ring in front of their chest, and it is then locked with a rivet. The prison guards then used a ten centimeter number 8 steel wire to connect the handcuffs and shackles together. 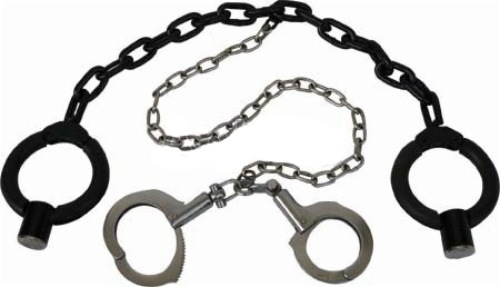 Since the handcuffs and shackles were only ten centimeters apart, Mr. Jin could not move at all. In addition, he was dragged into the yard in freezing weather. Novevember is extremely cold in northwest China. Mr. Jin froze from 7:00 a.m. until 9:30 p.m. for seven continuous days.

This torture was also called “Two Cows Fighting” at the Baiyin Detention Center in Gansu Province. In August to September 2005, the chief of the Baiyin Detention Center incited other prisoners to use this method to brutally torture retired practitioner Mr. Li Yu from the Yinguang Company in Baiyin City. After he was put in this torture device, all of the prisoners were frightened. They said that even death-row prisoners were never put in such brutal torture devices, and that this torture could disable people if used for a long time.

Baiyin Detention Center used a one-foot-long reinforced steel wire to connect the handcuffs and shackles together. The shackles were made of three-centimeter-wide and one-centimeter-thick steel. After the prison guards put the torture device on Mr. Li, a rivet was used to lock it permanently to his feet. In addition, they also put a chunk of steel weighing over 20 kilograms (44 pounds) in the middle of the shackle. Li Yu could not stand, sit, or walk. He had to sit on the ground and use his hips and feet to move little by little, which was very difficult. 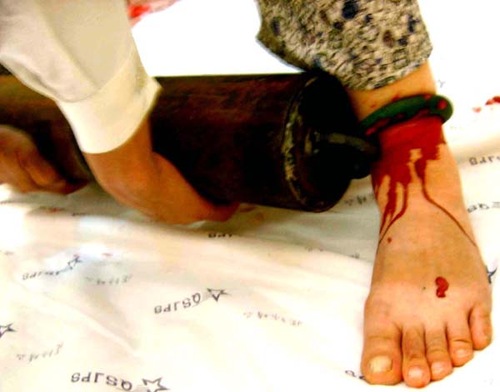 At the Huanggang Detention Center in Hubei Province, the CCP personnel used a 30 to 40 kilogram (66-88 pound) shackle, instead of a wire, to connect the handcuffs and shackles. Since it was so heavy the victim could not stand, but had to crawl on the ground. Practitioner Ouyang Ming, a teacher from the former Huanggang Industrial School (now called Edong Institute of Technology), was tortured with this method for ten consecutive days.

Handcuffs and Shackles Connected in the Back 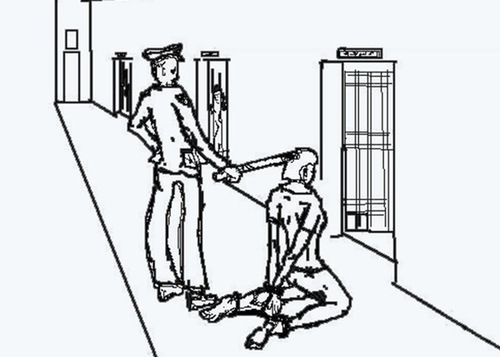 Ms. Zhang Zhenmin, a practitioner from the Lanzhou Meat Processing Factory, was brutally tortured with this method at the Second Detention Center at Hualinshan, Lanzhou in November 2002. Prison guards put the shackles on her, handcuffed her hands behind her back, and then used a 40 centimeter long number 8 steel wire to connect them together. The practitioner was unable to stand or squat. The prisoners had to give her water and food. Even when she went to the restroom, the guard did not take the torture instrument off, and she had to ask other prisoners for help.

Ms. Zhang was tortured for 39 days, and her entire body became swollen. The handcuffs became embedded into her wrists so deeply that they could not be removed easily when opening the handcuffs. Even after the guards eventually took the handcuffs and shackles off, she could not straighten her back, could not lift her legs, and her arms could not go back to their original position for a few days. Her right arm became partially disabled due to the torture, and she was unable to lift it for a long time.

Practitioner Mr. Jin Jilin, mentioned above, was also tortured with this method when he was detained at the Xiguoyuan Detention Center in Gansu Province. Wang Yanhui, the chief of the detention center, along with prison guard Wang Zhenya from the eighth team, put the handcuffs and shackles on Mr. Jin, and then used a 10-centimeter-long steel wire to tie it together behind his back. Jin Jilin could not squat or stand, and had to kneel down on the ground. His wrists were dragged down by the heavy weight, causing intense pain, and the inability to sleep.

On the bed, he had to lean sideways and move his waist toward the back as much as possible to reduce the pain on the wrists. Mr. Jin was tortured with this punishment for five days, on March 25-29, 2003. His hands became severely swollen, and the handcuffs were so deeply embedded into his wrists that they became rotten and bled. He also contracted scabies, and his entire body became swollen and was decaying. He suffered from constant and intense pain.

“Over Sixty Practitioners Arrested in Beijing in May-June 2014”