(Minghui.org) Czech Republic police arrested a Chinese embassy official and two members of the “welcome group” on August 28, 2014, in Prague, during a Chinese delegation visit.

As the Chinese delegation's motorcade approached Prague Castle, this Chinese embassy official and members of the welcome group arranged by the Chinese Communist Party (CCP), violently pushed the protesting Falun Gong practitioners, and tried to snatch their banners. The police warned them to stop, but they continued harassing the practitioners.

The police officers at the scene held the Chinese embassy official down, handcuffed him, and took him away. The police also arrested two members of the welcome group. 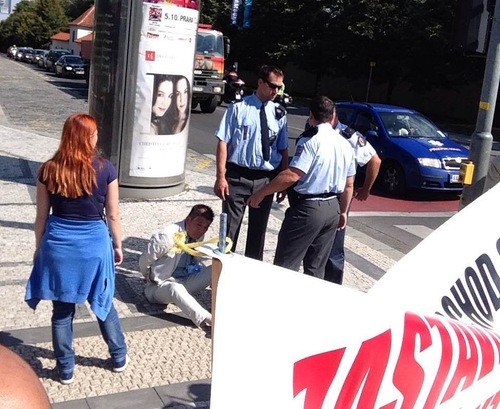 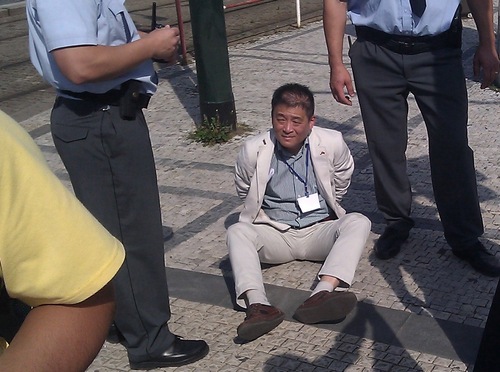 The Chinese official sitting on the ground, handcuffed by the Czech police. His name tag, reversed in the picture, indicates that he works at the Chinese embassy in Prague.

The 750-member Chinese delegation was visiting Prague for the China Investment Forum and the Central and Eastern European Countries Local Leaders Meeting at Prague Castle on August 28-29, 2014.

Zhang Gaoli, a member of the CCP Politburo Standing Committee, led the delegation. During his post as Party deputy secretary of Guangdong Provincial Committee in 1998 and 2001, and the same post in Shandong Province in 2001 and 2007, he organized several campaigns to help carry out the nationwide policy of persecution against Falun Gong, which began in July 1999.

During his two-day visit in Czech Republic, local practitioners publicized his participation in the persecution, along with that of four other delegates. 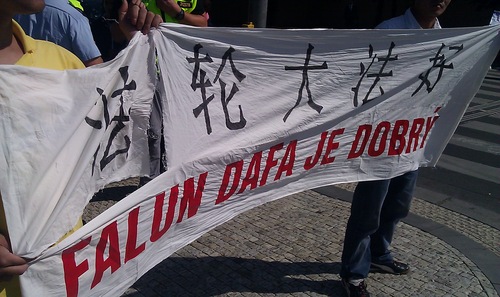 A banner that was ripped when thugs tried to snatch it from practitioners.

The welcome group arranged by the Chinese Embassy to greet the Chinese delegation occupied the pedestrian zone next to the back entrance of Prague Castle on the afternoon of August 28. Several people from the welcome group surrounded the Falun Gong practitioners who held banners. 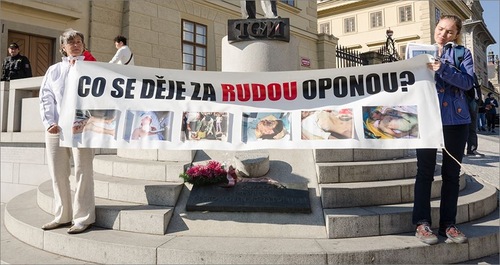 As the Chinese delegation's motorcade approached, the Chinese official and members of the welcome group physically assaulted practitioners and tried to snatch their banners. The police arrested the official and another two men. 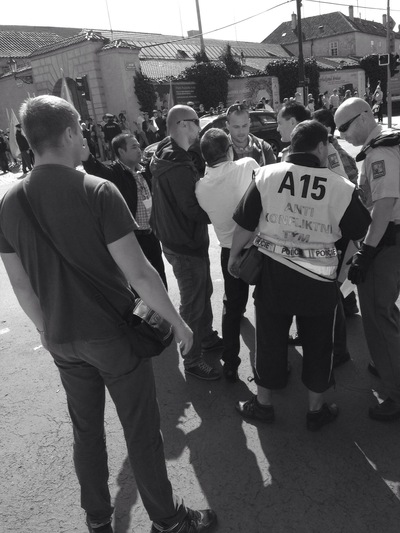 Czech police arrest the Chinese official and two members of the welcome group who attacked the Falun Gong protestors. 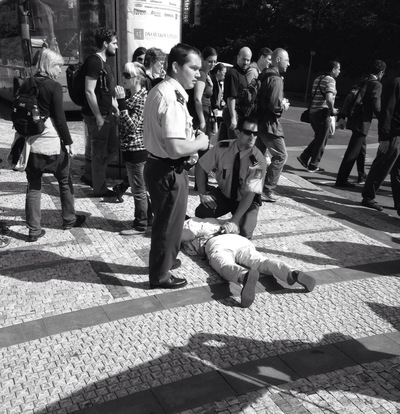 Police hold down the Chinese Embassy official and handcuff him.

Czech Media Exposure of the Persecution

Five members of the Chinese delegation have actively participated in the persecution of Falun Gong, and are suspected of committing crimes against humanity and genocide. They are: Zhang Gaoli, member of the Chinese Communist Party's (CCP) Politburo Standing Committee; Li Xiansheng, deputy secretary of the Hainan Provincial CCP Committee; Tong Zhiwu, deputy director of the Standing Committee of the People’s Congress of Liaoning Province; Zhu Haowen, secretary-general of Hebei Provincial Government; and Zhang Chenliang, secretary of Wu’an municipal CCP Committee in Hebei Province. 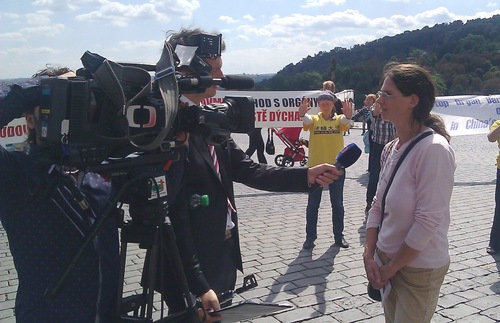 A reporter from Czech Television interviews a Falun Gong practitioner. 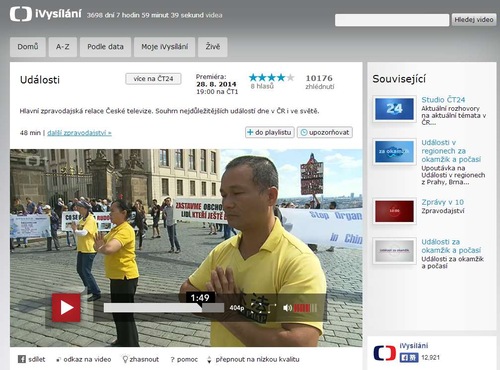 News report from Czech Television about Zhang Gaoli’s crimes and what happened during the protest at Prague Castle.

Czech Television reported: “It is said that Zhang Gaoli is responsible for arresting and torturing Falun Gong practitioners.”

One of the popular daily newspapers in the Czech Republic, Young Front Today, printed an article titled “NGOs: Main Host of the Forum Is Behind the Torture.” 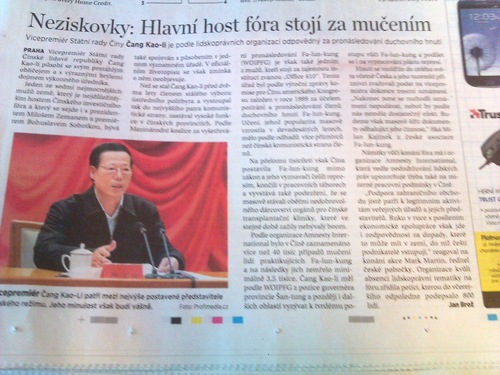 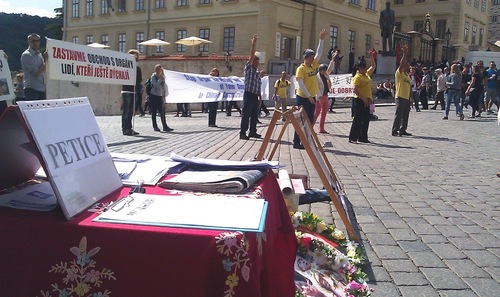 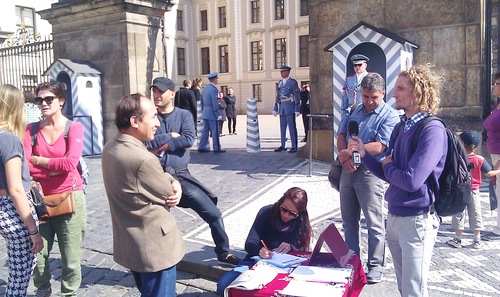 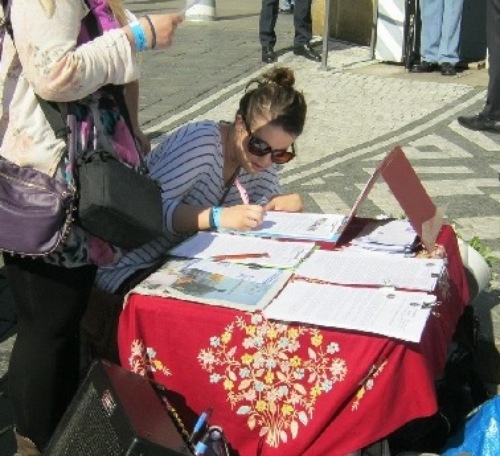 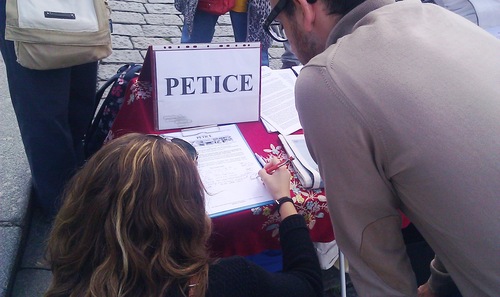 People sign petition calling for an immediate end to the persecution. 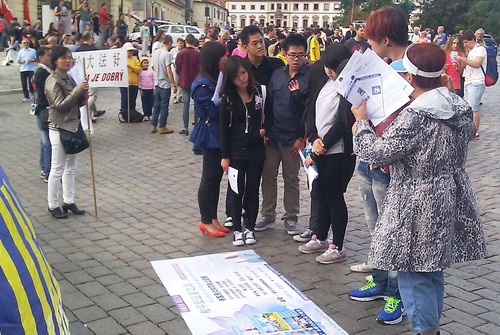 Chinese people stop by to learn facts about the persecution in China.

Many tourists and local residents signed the petition calling on the Czech government to urge the CCP to immediately stop the persecution and its state-sanctioned forced organ harvesting from living Falun Gong practitioners.

A Czech delegate attending the forum told a Falun Gong practitioner that they all received the “notice” on Zhang Gaoli, and said that on the second day of the forum, the atmosphere surrounding the Chinese delegates was very different.

A Czech businessman told a practitioner that when he found out about Zhang Gaoli’s crimes against Falun Gong, he immediately withdrew from the forum.

After reading a flier about the persecution, a lady outside Prague Castle asked an elderly practitioner if she was tired. The lady said, “Take a break. I can help you distribute the fliers.”

“The Story of an ALS (Lou Gehrig's Disease) Survivor”