(Minghui.org) Today's news from China includes persecution that took place in 15 cities or counties in 9 provinces. According to this report, 8 practitioners were subjected to mistreatment during detention, at least 23 practitioners were illegally arrested. 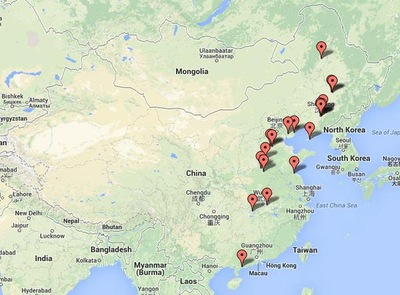 Ms. Liang Guifen from Poxin Town, Maogang District, Maoming was arrested on November 2, 2013. The Maogang District Court sentenced her to 3.5 years in prison on December 27, 2013. She filed an appeal.

The Maoming Intermediate's Court held a session again on May 8, 2014 and kept the original sentence. Ms. Liang has been transferred to prison.

Ms. Liu Yuxia was arrested by Bianfang Police Station officers on August 1, 2014. She is being held at the Changli Detention Center.

Ms. Li Shuxian was taken to Xiaobailou in Huanggu District and detained there on July 12, 2014.

Officers from the Heping Domestic Security Division and the Jixian Police Station followed Mr. Ouyang Hongbo to the apartment he rents and arrested him. They confiscated his laptop, printer, Master Li's picture, etc. Mr. Ouyang is being held at the Shenyang Detention Center.

Ms. Xie Yunxiang was arrested at home in Anling Village on August 1, 2014.

Mr. Wang Chengjiang from Linmin Village, Wanshun Township, Nongan County was arrested in front of his home and taken to a detention center on July 18, 2014. He was transferred to Changchun on the morning of August 2, 2014.

Ms. Jin Shuzhen was arrested at home by officers from the Shenzhou Town Police Station on the morning of August 1, 2014. The police ransacked her home. Ms. Jin managed to escape from the police station.

Ms. Gao Enhua, Mr. Meng Qingzhen and his wife Zhao Yuhua were arrested at the apartments they rent on the night of July 30, 2014. The police ransacked their homes.

Mr. Da Xu was arrested when he distributed Falun Gong flyers on August 2, 2014.

Mr. Ye Huiming was arrested by officers from the Xinxiang Police Department and its Weibin Branch on the morning of July 15, 2014. He was taken to the detention center after a forced physical examination. The police ransacked his home and confiscated a laptop, 11 cell phones he had used to make calls about Falun Gong, all his Falun Dafa books and Master Li's picture. Mr. Ye has been released.

Ms. Li Cunlian from Dazhaozhuang, Daxinzhuang Town, Fengnan District was arrested by Daxinzhuang Police Station officers when she talked to people about Falun Gong on July 30, 2014. The police ransacked her home. She is being held at the Fengnan District Detention Center.

Mr. Liu Naihe was arrested again by officers from the Haizhou 610 Office and the Haizhou Economic Developing District Police Station on July 20, 2014. The police tortured him by constantly depriving him of sleep. Mr. Liu went on a hunger strike to protest the persecution. His health has deteriorated.

Ms. Guo Liai (about 60 years old), Ms. Gong Guilan (about 55 years old) and elderly Ms. Yang were arrested by Jiliu Police Station officers in Putuan Township, Ezhou when they advised people to quit the CCP and its affiliated organization on the afternoon of July 31, 2014

Ms. Wang Xiuhe was arrested by Xiangguosi Police Station officers when she talked to people about Falun Gong on June 30, 2014. She was taken to the Kaifeng Detention Center.

Mr. Guan Yunzhi and Mr. Che Lizhi were arrested by Tongzhong Police Department officers on the night of July 30, 2014. The police confiscated Mr. Che's motorcycle, drivers license, identification card and about 6000 yuan he carried in his bag. They were taken to the Tiexi Detention Center for a term of 15 days.