(Minghui.org) A former Beijing security chief is facing criminal charges in Taiwan for his role in persecuting Falun Gong practitioners.

During Qiang Wei's six-day visit in Taiwan, banners worded “Qiang Wei, You Have Been Charged! Stop Persecuting Falun Gong!” followed him at every stop, starting from his arrival at the Taoyuan Airport on July 21, 2014.

Pursuant to Taiwan's laws against genocide, the Falun Dafa Association brought criminal charges against Qiang to the High Court of Taiwan for his crimes in the persecution of Falun Gong. In its complaint, the association requested the arrest of Qiang and an immediate investigation. 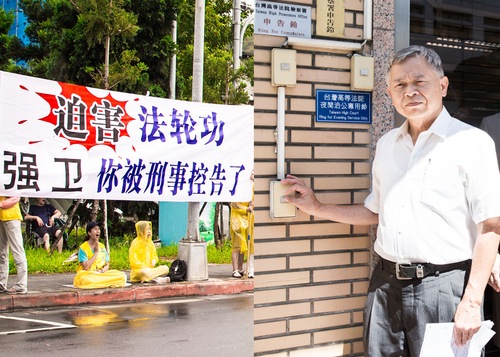 Director Chang Ching-hsi of the Taiwan Falun Dafa Association submitted the criminal charge complaint to the Taiwan High Court on the afternoon of July 21. The banner reads, “Qiang Wei, You Are Facing Criminal Charges.”

“Qiang Wei is a follower of former CCP head Jiang Zemin, and one of the primary culprits in the persecution of Falun Gong. He has slandered Falun Gong as director of propaganda in the Beijing CCP committee. In addition, as the Beijing Police Bureau and PLAC chief, he has directed the police to persecute Falun Gong practitioners in labor camps, and has instigate hatred towards Falun Gong. He was responsible for the severe persecution and deaths of Falun Gong practitioners in Beijing while he was secretary of the Political and Judicial Committee of the CCP there,” explained Director Chang Ching-hsi of the Taiwan Falun Dafa Association.

A reporter asked Qiang Wei after his talk with Chairman Lin Chong-sen of the Straits Exchange Foundation on July 22, “Falun Gong has charged you with crimes of genocide. Any comments?” Qiang did not say a word and left quickly.

Falun Gong practitioners also held banners outside the hotel where Qiang was staying, and called out loudly when he entered, “Falun Dafa is good! Stop persecuting Falun Gong! Qiang Wei, you have been sued!” 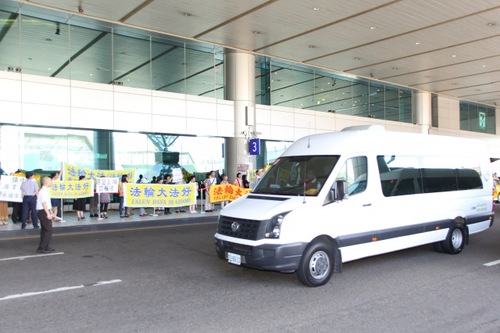 Upon arriving at the Taoyuan Airport on July 21, Qiang Wei, in the white van, saw banners reading, “You Have Been Sued! Stop Persecuting Falun Gong.” 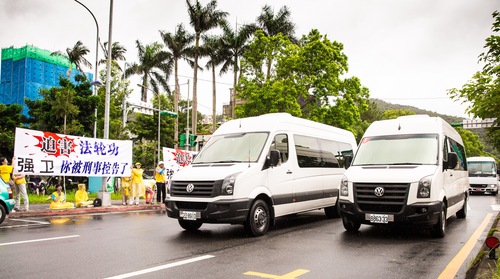 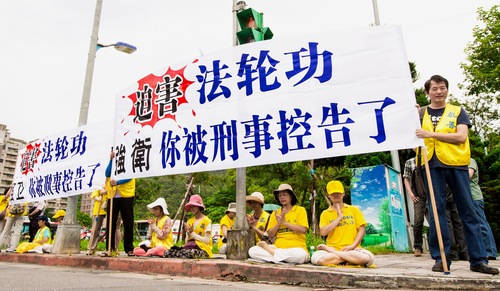 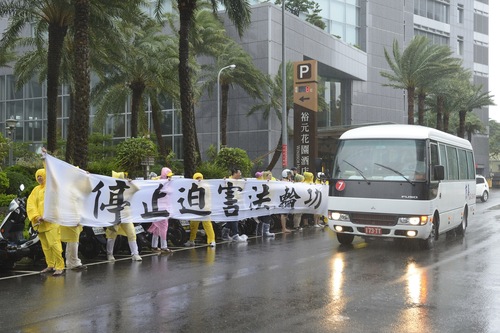 A typhoon hit Taiwan on July 23. Falun Gong practitioners continued their protest, despite the strong wind and rain, as Qiang's motorcade arrived at the Windsor Park Hotel in Taichung City.

Falun Gong practitioners tell Qiang Wei, “You have been sued!” as his motorcade arrived at the mountainous area of Foguang Mountain in Kaohsiung. 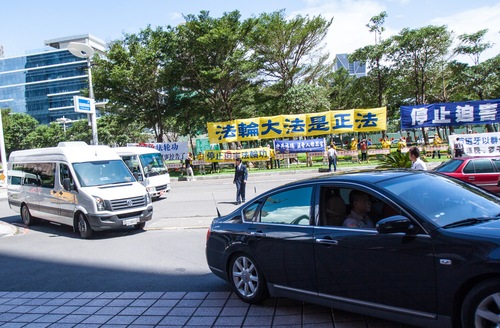 Upon seeing Falun Gong practitioners condemning him loudly, Qiang Wei and his bodyguards quickly enter the hotel in Kaohsiung, his last stop during the visit, on July 25. 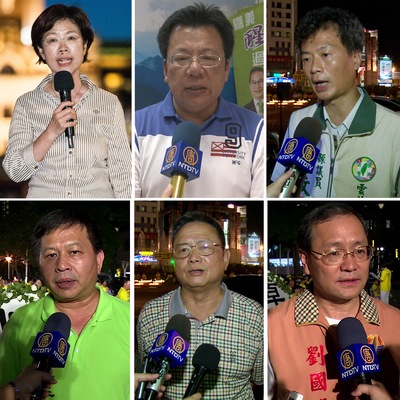 Legislative Council Member Yu Mei-nu said, “Qiang Wei is the first batch of human rights villains in the CCP's persecution of Falun Gong. I hope that the Taiwan Government will pay attention to the issue. I call on all mayors not to invite, meet with, or welcome him. Falun Gong practitioners have brought charges against him. I hope that the judicial system can bring him to justice.”

Legislative Council Member Li Jun-yi said, “Why let CCP officials with a record of human rights violations come to Taiwan? The Taiwanese people have a clear attitude. We don't welcome anyone with poor human rights records in Taiwan.”

Calling on the Taiwan Government to Arrest the Human Rights Violator

A Falun Gong spokesperson said, “Qiang Wei follows Jiang Zemin to persecute Falun Gong. We must stand up to condemn him and stop the persecution.”

Practitioner Cheng Yi, who is married to a Taiwanese man, personally experienced the persecution in China. She learned the practice in Taiwan years ago, but she was arrested when she returned to Guangdong Province, China and was imprisoned for four years for distributing Falun Gong informational materials.

Ms. Cheng called on the Taiwan government, “Jiang Zemin's faction commits crimes against humanity, including torture and genocide in the persecution of Falun Gong. They are no different from the Nazis during World War II. Why are you letting human rights violator Qiang Wei come to Taiwan? I call on the Taiwan government to bring him to justice.”