(Minghui.org) Shanghai is a large, modern city with a glamorous reputation. But there is nothing attractive about arresting and detaining good people for handing out literature. On June 9, an anonymous tipster called the police to report that Falun Gong practitioner Ms. Guan Longmei, 62, was handing out information about the Chinese Communist Party's (CCP) persecution of Falun Gong. This occurred in the Jinyang District of Pudong, in Shanghai. Ms. Guan was sentenced to one month in detention. Authorities also ransacked her home and took dozens of books related to Falun Gong and more than 100 DVDs of the latest Shen Yun Performing Arts show.

Ms. Guan's arrest and detention is only the latest in a series of arrests and detentions she has been subjected to during the past 15 years. In September 2001, she was sentenced to forced labor at the Qingpu Women's Forced Labor Camp for two years, where she endured brainwashing and torture.

She was coerced into renouncing her belief through bitter torture, but later wrote a solemn declaration to void her denunciation. To punish Ms. Guan for this declaration, team leader Xu Jiejie was ordered by a guard to suspend her by her handcuffed wrists in front of an open window with a northern exposure, and unbutton her shirt. The bitter cold made her scream out in pain. The team leader ordered a drug addict prisoner to stuff her mouth with a dirty sock. A guard brought masking tape and said to the prisoner, “Seal her mouth with tape if she screams again.” 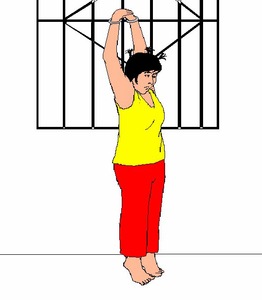 Ms. Guan was left hanging for eleven hours on the first day of her detention. When she was let down, her hands were so painful that she couldn't pull up her own pants. She was then handcuffed to a bed at night and was not allowed to get out of the bed even to use the bathroom. She could not sleep due to the extreme pain. She was left hanging for eight hours the next day. On the third day, Ms. Guan was placed in a small solitary room. She was handcuffed to the bed for eight consecutive nights. She lost so much weight that she was skin and bones.

Ms. Guan's second detention was for six and a half years. Seven police officers broke into her room on June 3, 2006, and ransacked it. In January 2007, the Hongkou Court in Shanghai sentenced her to the Songjiang Women's Prison.

During her detention, she was subjected to brainwashing, and forced to do slave labor. She was tortured every day, not only by the prison personnel, but also her husband and son who would call her.

Nothing could change her belief this time. She declared to her guards, “Forget about brainwashing me. I will never renounce my faith even if you kill me.”

“Pursuing Comfort and Leisure Achieves Nothing”