(Minghui.org) Today's news from China includes incidents of persecution that took place in 16 cities or counties in 7 provinces. According to this report, 10 Falun Gong practitioners were subjected to mistreatment during their detention, and at least 41 practitioners were illegally arrested. 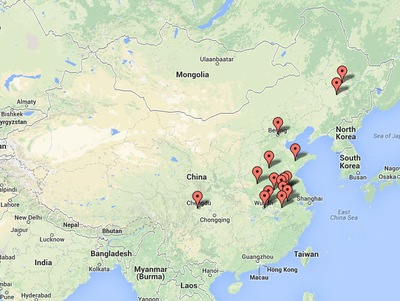 1. [Anhui Province] Practitioners Arrested in 2014 Through the End of May

From January 1, 2014, to the end of May, more than 40 practitioners from all over Anhui Province were arrested or sentenced to prison. Ms. Wang Cuilan was arrested and sentenced to three years in prison.

Here is the list of the more than 40 practitioners arrested:

In Bangbu City, Ms. Wu Junfeng and Ms. Wang Ping were arrested and Ms. Wang is now under police surveillance.

In Guangde County, Mr. Tang Dehang and his father were arrested.

In Wuwei County, Mr. Lu Qinlin and another practitioner were arrested.

Ms. Zhang Chunjie, her husband Mr. Xu Fuli, her mother, and her mother-in-law went to a botanical garden on the morning of June 2, 2014, to clarify the facts about Falun Gong. They were arrested and taken to a police station. The police took the two elderly practitioners (both in their eighties) home, and ransacked the place. Ms. Zhang's mother-in-law went to the Dehui City Police Department to demand the release of her son and daughter-in-law. She was told that the couple had been taken to a detention center to be detained for 15 days.

Ms. Zhou Qinying, Ms. Zhang Aiju, Ms. Li Aifeng, and Ms. Hu Liuying from Songbu Town went to Qiting Town on May 30, 2014, to tell people about Falun Gong. They were arrested and taken to the Macheng City Detention Center by officers from the Qiting Police Station.

Mr. Che Chunrong from the Daxing area was followed home after talking to people about Falun Gong on May 29, 2014. He was arrested at home and taken to the Daxing Detention Center.

Ms. Zhao Xiuzhi and her daughter, Ms. Guo Lili, from the Xiangfang District, were arrested on the afternoon of June 1, 2014, by officers from the Zhengyanghe Police Station for distributing Shen Yun Performing Arts DVDs. They are being held in the Yaziquan, Harbin City, No. 2 Detention Center.

Ms. Shao Junsu was arrested and taken to the Liangcun Township Police Station on the morning of May 26, 2014, for distributing Falun Gong informational materials. The police ransacked her home. Ms. Shao was later taken to the Nanle County Detention Center.

Ms. Shi Xiuqin, about 70, from the Hanting District Chemical Fiber Plant, was arrested on the morning of June 3, 2014, for telling people about Falun Gong. She is being held by the State Security Division.

Ms. Yang Hong was arrested again and taken to the Xixie Detetion Center by officers from the Gongren Town Police Station on May 26, 2014.

Ms. Cai Luming was arrested on April 24, 2014. The police ransacked her home and took a computer and many Falun Dafa books.

Ms. Li Guiying and Ms. Pan Tingying were arrested by officers from the Wujin Police Station on the morning of May 11, 2014, for telling people about Falun Gong. Zeng Weizhong, director of the police station, sent officers to Ms. Li and Ms. Pan's homes to force their family members to turn in informational materials about Falun Gong. Both practitioners were released that afternoon.