(Minghui.org) Over the past several years, the Chinese Communist Party's (CCP) organ harvesting from living Falun Gong practitioners has been exposed internationally. Due to practitioners' constant efforts to expose the persecution and clarify the truth about Dafa, as well as the support of concerned individuals, more and more people worldwide are calling for an end to the organ harvesting crimes in China.

Many state governments, including Canada, Australia, Spain, Italy, and the European Union have passed resolutions demanding the immediate cessation of the crime of organ harvesting, an end to the persecution of Falun Gong, and demanding the unconditional release of all detained Falun Gong practitioners.

Like their counterparts overseas, Falun Gong practitioners in China have persisted in peacefully clarifying the truth – risking arrest, detention, imprisonment, torture, and even the very real threat of losing their lives. Over the years, as more and more people in China have learned the nature of the CCP's atrocities, they have courageously signed petitions calling for a stop to the crime of organ harvesting and an end to the persecution.

As of this May, 4,350 people in Hunan Province have signed the petition and demanded that the chief culprits, Jiang Zemin, Zhou Yongkang, and Bo Xilai be punished. 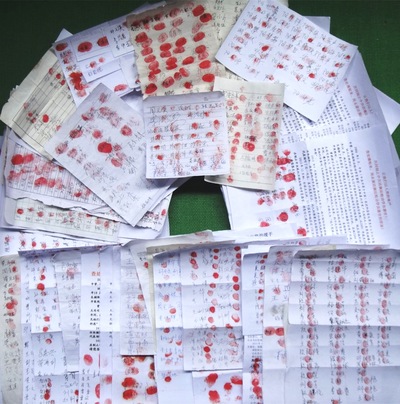 The following comments were made by ordinary Chinese citizens who signed the petition. They were recorded by a practitioner who reached out to his fellow countrymen, to help them understand the truth and take a stand on the side of justice.

Middle-aged Woman: "These people are so bad!"

I once met a middle-aged woman. I smiled at her and she smiled back at me. I said, “It's fate that we've met. I would like to tell you something important." I talked to her about Falun Gong, the persecution, and the CCP’s organ harvesting from living Falun Gong practitioners.

College Student: "This is simply too cruel!"

One day it rained heavily, so I took a bus home. On the bus, a young man sat next to me, and we started to chat. He told me that he was a college student. I clarified the truth to him. He said, "I know some Falun Gong practitioners in my hometown. They are very kind."

I then told him about the crime of the CCP’s organ harvesting from living Falun Gong practitioners. He was surprised and said, "It's too cruel to do such inhuman things. They are totally lawless." He immediately signed the petition and quit the CCP and its affiliated organizations.

Since he did not bring an umbrella, I gave him mine. He was very touched, and repeatedly said, "You Falun Gong people are good! The more people there are like you, the better society would be."

I met a middle-aged man in a supermarket. After I clarified the truth to him, he said, "I believe what you’ve just said. The Communist Party is extremely bad. I know a Falun Gong practitioner who was very good. He was jailed for a few years. When he was released, his fingers were broken from torture... The Communist Party is extremely bad. I want to learn the [Falun Gong] exercises; can you give me some information?"

I answered, "I don’t live here. Can we meet this afternoon at the small park?" He happily agreed. It was raining in the afternoon and I wondered if he would come or not. I went there anyhow and he was there waiting for me. I was moved.

An Official Was Rewarded

After that, many aspects of her life improved and she was promoted. She persuaded dozens of people to sign the petition. She also helped to spread the Nine Commentaries on the Communist Party and other informational CDs.

This official's son suffered from appendicitis, but the condition had been misdiagnosed by a large hospital. As a result, his condition got worse and worse. She called me and begged Master Li to bless her son so his surgery would be successful. His surgery went really well. Later, her son also signed the petition and said, "The CCP is too cruel to do such wicked things."

I once clarified the truth to a middle-aged man. He signed the petition and said, "I'm absolutely against the CCP’s organ harvesting from living Falun Gong practitioners."

A driver nearby called me over, wanting to talk to me. At first, I thought that he was a plainclothes police officer, but I calmed down and walked over to him. He said, "Do you have any Falun Gong material? I've read all the other materials. Do you have any new ones?"

I found some for him and asked him to sign the petition. He did and then told his friends about Falun Gong, and they all accepted the truth-clarification materials.

The driver said to me, "Falun Gong is very good!”

Business Owner: "The CCP did such a wicked thing!"

I clarified the truth to a business owner about the inhuman persecution of Falun Gong. I told him that the Party harvests organs from living practitioners and sells them at high prices.

He said, “I know that Falun Gong is very good. I know a few Falun Gong practitioners, and they are very kind. The CCP is the worst; they did such a wicked thing. I signed a petition before and was rewarded – my business has improved."

Food Vendor: "I know that the CCP is going to collapse soon"

We clarified the truth to a food vendor and offered him the booklet Nine Commentaries on the Communist Party.

The vendor responded, "I know about Falun Gong, and I've read this book. Falun Gong practitioners are good people. The CCP’s persecution is irrational. Forced organ harvesting is such a wicked thing. I know that the CCP is going to collapse soon. Many people know it. I know that May 13 is your Master’s birthday. Please say hello to your Master for me." He took the booklet and said that he would share it with other people.

Middle-aged Man: "Please give my thanks to your Master!"

We once talked about the CCP’s crime of forced organ harvesting to a middle-aged man. He said, “My mother is a Falun Gong practitioner. She used to be very sick. She is very healthy now. She did not know how to read before, but now she can. Please give my thanks to your Master! I have read all available Falun Gong materials, watched the Shen Yun DVD, and so on. Your Master is so great! He has made so many people regain high morals and good health!”