(Minghui.org) Nineteen percent of Falun Gong practitioners who were tortured to death in the persecution were subjected to the tiger bench torture.

The Chinese Communist Party (CCP) uses 11 major and 70 minor torture methods to persecute Falun Gong practitioners. The tiger bench is one such torture device used extensively in all labor camps, prisons, detention centers as well as police departments and stations. 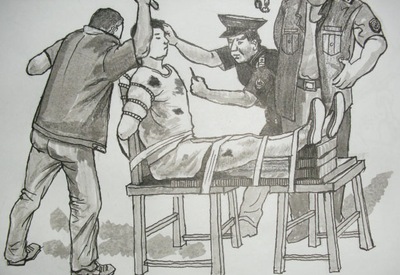 The perpetrators typically use several leather straps to bind the victim's legs tightly to the tiger bench and gradually lift the ankles, sometimes until the straps are snapped. Practitioners are tortured for a long time and often lose consciousness or go into shock as a result of the excruciating pain.

In the initial years of the persecution, a prison guard named Zhang Zhengzhen from Changchun City made these comments while torturing practitioners: “[Former head of the CCP] Jiang Zemin pays me over 1,000 yuan a month and this is what I do. The tiger bench was previously used on murder convicts. Now it is used on Falun Gong practitioners. Every time a practitioner dies, Jiang Zemin is pleased. There are several corpses in the basement.”

Some guards admitted: “I do whatever Jiang Zemin tells me to. Nobody cares if a practitioner is killed. Even if the ban against practicing Falun Gong is lifted tomorrow, I will still torture practitioners today.”

The following cases of persecution are typical examples the brutality of the tiger bench.

Masanjia guards Yi Yujiang and Ji Meng viciously beat Mr. Yu, shocked him with electric batons and hung him up by handcuffs for several days. He was imprisoned in a custom-made iron cage for three months in which he could not stand up or lie down. Mr. Yu Ming was bound to the tiger bench for 12 days and lost consciousness several times during the torture.

The wife of Chen Zhenggao remained in the room next to the scene of torture to supervise and pressure the guards into carrying out her husband's directives. Guards shocked Mr. Yu's genitals with electric batons, poured cold water on him and tied him up with ropes. They burned his lower body and hit his head with iron clubs until he lost consciousness.

2. Thousands of Practitioners Tortured on the Tiger Bench after the Interception of Changchun TV Networks

After eight cable TV channels in Changchun simultaneously aired programs about the truth about Falun Gong on March 5, 2002, all police in Changchun City were mobilized to carry out mass arrests of practitioners.

According to a police officer: “We received orders from above not to work on murder or arson cases. Just arrest Falun Gong practitioners.”

According to practitioner Mr. Zhang Zhikui, he was tortured to the brink of death in a secret room in Jingyuetan, Changchun. He was later taken to the city's police department and saw many small rooms in the building. There was a tiger bench in every room and on them were female practitioners. Many of them had fainted from the torment and their lower bodies were naked.

Mr. Liu Chengjun, one of the key practitioners involved in the interception of the Changchun TV network, was bound to the tiger bench for 52 days. 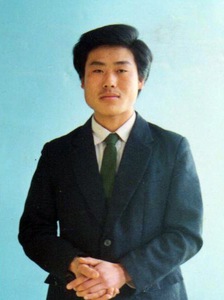 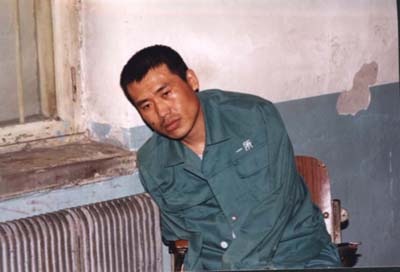 Mr. Liu was subjected to a number of different torture methods. All of his teeth were knocked off when he was repeatedly beaten and the lining of his abdomen was torn causing a hernia in his small intestines.

Mr. Liu's whole body was covered in wounds after 21 months of unimaginable torture. His internal organs were severely damaged. When his family rushed to the hospital on December 25, 2003, they saw him covered in blood. Mr. Liu passed away at 4 a.m the next day. He was only 32 years old.

3. Tied on the Tiger Bench, Hands Behind the Back and Arms Forced into Painful Positions 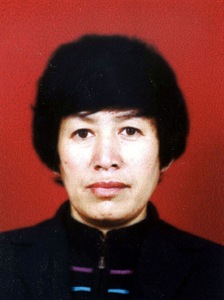 Ms. Wang Yuhuan was arrested by the Changchun police on March 11, 2002. The next night, officers Gao Peng and Zhang Heng bound her, put her in the trunk of a car and brought her to a place in Jingyuetan.

She was tied to the tiger bench and every five minutes, police officers would torture her. They bound her hands behind her back and forced her arms back and forth until they were dislocated. She fainted many times from the pain.

Her tormenters then pushed her head towards her thighs and nearly broke her neck. Her ankle was fractured. The intense pain caused her whole body to tremble and blood oozed through her thick, wool pants.

Mr. Che Zhongshan was put under strict surveillance at Dalian Detention Center on July 6, 2012. His hands and legs were shackled to rings on the ground for two months. Sometimes he was tied to the tiger bench for an entire night. The once healthy man was sent to the hospital three times for emergency treatment.

Mr. Liu Changhai is a military officer in his 30s. Guards at Dalian Labor Camp prepared six forms of torture devices to torment him on the night of March 22, 2001. They stuffed his mouth with a rag so that no one could hear his screams of pain.

Mr. Liu was placed on the tiger bench, his legs bound to the edge of the bed. A separate belt was used to bind his thighs and calves. Altogether, 24 boards were stuffed under his legs, and in the end the belts used to bind his legs snapped.

When Mr. Liu refused to give in despite the torture, guard Xiao Wangjun tied and hung him to the windowsill, stripped off his clothes and shocked him with an electric baton.

6. Ms. Xiao Shufen Tied to the Tiger Bench and Force-fed with Mustard Oil

Ms. Xiao Shufen, 63, was arrested by officers from the Mudanjiang City Domestic Security Division in Heilongjiang Province at the end of 2002 for telling people the facts about Falun Gong.

Ms. Xiao was tortured for seven days and seven nights. She was bound to the tiger bench and force-fed with huge amounts of mustard oil. She was then nearly suffocated to death when a plastic bag was placed over her head. The perpetrators pulled her teeth, and pinched her fingers and fingernails with pliers. She was not allowed to sleep for seven days and nights and was tortured repeatedly.

7. Xichang Police Officer Threatened: “We'll just cremate you if you are beaten to death!”

Mr. Fang Zhengping is a practitioner in his 60s from Xichang City, Sichuan Province. He was secretly taken to a torture room in the Xichang City Domestic Security Division on the evening of August 26, 2003 by Zhou Xin and other officers. One officer said, “We spent over 30,000 yuan in renovating this room. Irregardless of how hard we hit you or how loud you scream, nobody can hear anything from outside. The sound insulation is excellent.”

The perpetrators forced Mr. Fang to sit on a tiger bench and his hands and legs were shackled. Nine officers rotated in three shifts to interrogate and torture him.

When Mr. Fang said in protest, “My body is so swollen, stop hitting me.” Zhou Xin replied: “We'll just cremate you if you are beaten to death!”

The police officers intentionally hit Mr. Fang's arms and legs, which were already severely bruised. They struck him wherever it hurt most and pulled and kicked the areas of his body that were swollen. Mr. Fang Zhengping was exhausted after being constantly interrogated and beaten. He could not help but close his eyes. The officers pressed a button on the tiger bench and a loud shrill sound was emitted. They also drenched him with cold water to wake him up. 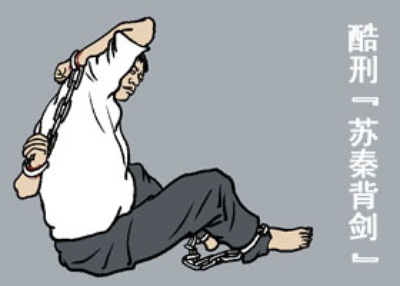 Torture illustration: Carrying a Sword On the Back

Officer Li Yu pulled one arm over Mr. Fang's shoulder and handcuffed it to the other arm behind his back in a posture similar to carrying a sword behind the back.

Mr. Fang screamed in pain until his voice became hoarse. After that, he was tortured again on the tiger bench.

Mr. Fang was continuously handcuffed, beaten and tormented for 30 hours from 4 a.m. on August 27 until 10 a.m. the next day.

Prisons Use the Tiger Bench to Persecute Practitioners

The Strict Management Division at Nanguanling Prison, Dalian City installed a tiger bench made of steel in November 2013. Whoever was sent to the division had to sit on it for three days, with their hands and legs fastened to the device.

2. Practitioners Shackled to the Tiger Bench and Tortured with a Large Light Bulb

Shenyang Prison intensified its persecution of detained practitioners during the summer of 2012. Those who refused to renounce Falun Gong were targeted.

Guards shackled the practitioners' arms, legs and neck to the tiger bench. A large light bulb was placed in front of them in order to scorch their faces and their eyes would become irritated. While being tortured, they were not given any food or water. If the practitioner shut his eyes, he would be shocked with an electric baton. The victim was bound to the device for 24 hours a day and had to urinate or pass excrement into buckets placed underneath the tiger bench.

Guards and odd-job workers took turns watching the practitioners. Those who succumbed to the torture and gave up their faith would be released from the bench. Usually, practitioners were tortured for a minimum of three days. 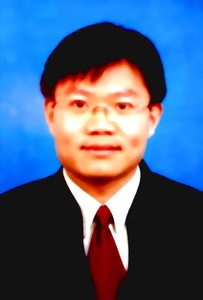 Dalian practitioner and human rights attorney Mr. Wang Yonghang was forced to sit on the tiger bench and was subjected to other forms of torture while in detention. He consequently developed TB as well as pleural and peritoneal effusions. He developed symptoms of paralysis from the waist down. He had difficulty walking and became so weak that it was an effort for him to even speak.

The Yinchuan Prison brought in three “experts” experienced in persecuting practitioners from Qianjin Prison in Beijing on February 15, 2009 to assist guards in “transforming” detained practitioners.

They trained prison guards, supplied drawings and made ten tiger benches which were then moved to solitary confinement rooms.

Several convicts were transferred from prison cells to assist in torturing Falun Gong practitioners. Eleven practitioners were locked up in solitary confinement cells and made to sit on tiger benches. They were also tortured with the “stew the eagle” (a sleep deprivation brainwashing method) for several consecutive days and nights.