(Minghui.org) From May 31 to June 8, Falun Gong practitioners were invited to perform at the 16th International Cultural Week in Dortmund, Germany.

Germany, a country with the second largest immigrant population in the world last year, is becoming increasingly more culturally diverse. Dortmund, the seventh largest city in Germany, is no exception, and International Cultural Week celebrates that diversity.

Falun Gong practitioners demonstrated the exercises on stage and introduced the practice to the audience. 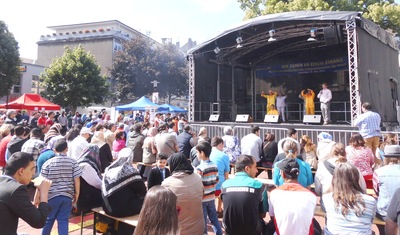 Practitioners also set up a booth, passed out flyers and exposed the brutal persecution of Falun Gong to the public. Many people signed on the petition, expressing their support for the practitioners' peaceful resistance. 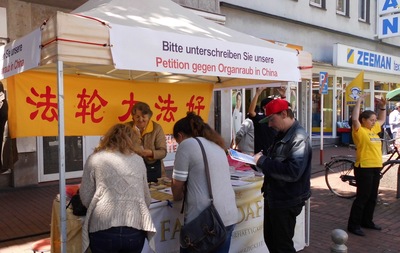 Signing on the petition

Practitioners shared their experiences of practicing Falun Gong with those who were interested in learning the exercises.

Sixty-year-old Catalina was born in Russia, and has lived in Germany for 12 years. She is always happy and energetic, and enthusiastic to share her secret.

“I had been looking for something in my life. I didn't know what it was. I'd tried Taichi, yoga, and other things, but they didn't help. When I found Falun Gong, when I saw the video of Master Li Hongzhi's lectures, I knew this was what I was looking for. So, I started practicing.”

“All of my physical pains disappeared. I went back to feeling like I did during my youth. My whole body became lighter. Now I can do much more than I did when I was younger,” Catalina said.

Born and raised in Russia, Catalina is familiar with Communist culture. “Communism has destroyed traditional culture, especially in China. Quitting the Communist party is important to the Chinese people,” she said.

Morrot from Bulgaria has always been interested in Asian culture. One day he found a Falun Gong flyer in his mailbox, which led him to a Falun Gong website. He was drawn to the books. A brand new world unfolded before him. Practicing Falun Gong healed his depression, and has also helped to make him more tolerant.

He was hit by a car and his knee was injured. People told him that he could get at least 1,000 Euros from the driver, but Morrot let the driver go. “I have become quieter. My body has also become lighter,” he said.

Satlina from Romania has practiced Falun Gong for three years. “I have found inner balance through Falun Gong, which also healed my lactose intolerance and neck pain.”

“My father, an artist, was persecuted by the Communist party. In Romania, people were brainwashed by the party and forced to praise it. When I heard about the persecution of Falun Gong in China, I cried,” she said “The Romania people overthrew the Communist party, but the Chinese people are still suffering from it.”

“We now have all kinds of freedom in Romania, which should be enjoyed by the Chinese too,” Satlina recommended the book The Nine Commentaries on the Communist Party, “This book is good for the Chinese. It helps them recognize the party's evil nature. I believe that people will abandon Communism and opt for a bright future.”