Physical Examinations and Blood Tests—Concerned About Practitioners' Health or Something Else?

(Minghui.org) Falun Gong practitioners held in forced labor camps and prisons in China are often forced to have physical examinations and blood tests, even though they are frequently subjected to various forms of torture by the guards and inmates. The results of these tests are not revealed to the practitioners.

Numerous investigations since 2006 suggest that Falun Gong practitioners were, and are still, being harvested for their organs. 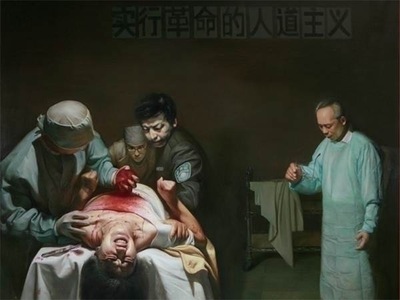 Below are some practitioners’ personal accounts of forced physical examinations and/or blood tests while in detention.

In 2004, I was taken to a large room on the first floor of a four-story building, in the Banqiao Women’s Forced Labor Camp in Tianjin, where doctors forcibly withdrew large amounts of my blood.

I was physically examined multiple times during my four years at the camp, and was quite confused as to why the guards cared so much about my health. It was not until later that I learned of the CCP’s systematic organ harvesting from Falun Gong practitioners. I am very lucky to have gotten out of that labor camp!

My name is Chen Yanli. I was detained in Liaoning Province Women’s Prison from May 2005 until October 2010. The guards severely tortured me, causing injuries to my arms and legs, leaving me confined to a wheelchair for a long period of time.

I asked for medical treatment many times due to my poor health, but the prison officials denied my requests. They refused to send me to a hospital; however, they often withdrew my blood for tests, and sometimes forced me to undergo gynecological examinations.

I was forced to give blood at least three times while detained in the Huayuan Forced Labor Camp in Heilongjiang Province. The needle used to withdraw my blood looked like it had been used before and was not sterilized. I was told that such blood testing was only for Falun Gong practitioners, but no practitioner in the camp was informed of the results.

Practitioners Forced to Give Blood Three Times in a Year

In August 2008, 18 practitioners were taken to the Harbin Second Detention Center. They were forced to provide blood samples to prison doctors as soon as they arrived.

More than a dozen officers from the local 610 Office, domestic security division and the police station arrested me as I was on my way to work on September 15, 2008. I was taken to a detention center, where I was forced to give my fingerprints and had my photo taken.

When I tried to protest against the persecution, a guard with the surname Liu immediately had several male inmates surround me. They handcuffed my hands and feet, and severely punched and kicked me. I went on a hunger strike to protest my treatment. However, they continued torturing me until I was in critical condition. I was then taken to the Guangzhou General Hospital of Armed Police Forces.

The sixth floor of the hospital was specifically set up to accommodate people from prisons, detention centers and labor camps in Guangdong Province. Although I was in the hospital, I was still monitored by guards from the detention center. The medical staff came to check on me every two days. The nurses searched every patient once a week, during which I was forced to take off my clothes under the watchful eye of the male guards. Being a woman, I found this very humiliating, and felt under severe pressure.

I was detained in the hospital for 6 months. During that time, I was forced to have blood tests many times. No one explained to me why they withdrew my blood, and I was never told the test results. When I asked a nurse why they repeatedly drew my blood, she said that she was just following orders.

Forcibly Given a Physical Examination and Blood Test

In the winter of 2002, guard Zhao Chunman informed me that I had to have a physical examination, and took me to an office. Three doctors gave me a thorough examination. They checked my heart, blood pressure, eyes and wanted to know my medical history. I was in the midst of a hunger strike protesting the persecution, so I was very weak at that time. The doctors took a while to finish the examination and eventually said, “You can go back now.”

I was sentenced to four years and was taken to the Harbin Women’s Prison on January 17, 2003. While detained there, I was repeatedly given physical examinations, blood tests and vaccination shots. When I refused to cooperate, the guards had inmates hold me down, and forcibly drew my blood and gave me shots.

After I was released in 2006, I learned about the CCP’s organ harvesting from Falun Gong practitioners. Whenever I think back about this period of time, I experience a severe level of panic and fear.

Forced to Give Blood in Harbin Drug Rehabilitation Center

I’m from Daqing City, and was arrested when I went to Beijing to appeal for justice for Falun Gong in early September 2001. The police took me into custody and transferred me to the Harbin Drug Rehabilitation Center.

As soon as I arrived there, a female guard asked me how old I was. When I told her that I was 56 years old, she immediately responded: “Stop! You don’t need to enter this room. Wait outside.” I then heard her say to someone else, “We don’t need people of that age!”

However, I was still admitted to the rehabilitation center. While detained there, the guards forcibly withdrew my blood several times. Once they drew a bottle of 200cc of my blood, but I was never told the test results.

In the first half of 2003, practitioners detained in the Shanghai Women’s Prison were informed that they would have a physical examination. We found out that this was only for Falun Gong practitioners, as none of the inmates received such a notice. They examined every part of my body. The doctors withdrew my blood and carefully checked my urine, heart, liver, kidneys and gynecological condition.

There were more than 100 practitioners detained in the prison. The physical examinations took quite a few days. We didn’t know where the doctors came from. The guards closely monitored each practitioner and forbade us to talk. After the examination, some practitioners were transferred from the prison. I don't know what happened to them.

Guards at Shanghai Women’s Prison Interested in My Eyes

I was transferred to the Shanghai Women’s Prison from a detention center. Soon after I arrived there, a guard told me to have my eyes examined. I was quite confused about the need for this, and asked why. The guard told me that I had requested it. I said, “When? My eyes are completely fine. I don’t need it at all!” Despite my refusal, the guards forcibly took me out of the room to wait for transport to take me to have my examination. Twenty minutes had passed, but the vehicle didn’t come. I kept asking why they wanted to examine my eyes, but they didn’t say a word. In the end, they took me back to my cell, as the vehicle still hadn't arrived.

I didn’t know about the CCP’s organ harvesting when I was detained in the prison, but in hindsight I'm frightened about what could have happened!

I was called in for a blood test and physical examination in September 2002, when I was held in the Hewan Forced Labor Camp in Wuhan City, Hubei Province. They drew a full vial of blood from me, but I wasn’t informed of test results afterward.

One day in late October, at around 10:00 a.m., guard Liu Yan came to my cell, while all inmates were called to do labor work. She said to me: “You said you are free of illness because of your practice. I’ll give you a special health examination today. If you are free of illness, I’ll release you. Otherwise, you must sign a guarantee statement.” I replied, “I don’t have any illness.” She and another guard then took me to a black car and had me driven to the hospital.

A doctor at the hospital did a thorough examination of my body, and asked me how long I had practiced Falun Gong and what illnesses I suffered from before I started practicing. I told him that I had tracheitis that was hereditary. My mother died of pulmonary disease and my father died of liver disease. I suffered from pneumonia and hepatitis as well. After the examination was complete, I saw Liu Yan talking with the doctor. Liu looked upset, but she didn’t tell me anything about the results.

My son became ill two years ago. He went to the hospital and had part of the examination that as I was given in prison. My son spent a few hundred yuan on the examination fee. Considering that I was given a full body test, I believe that mine may have cost at least one thousand yuan. Why did Liu Yan spend that much money to check my condition while persecuting me?

In July 2006, former Secretary of State for Asia Pacific David Kilgour and Human Rights lawyer David Matas published their first independent investigation report, titled Report into Allegations of Organ Harvesting of Falun Gong Practitioners in China. The report states: “The government of China and its agencies in numerous parts of the country, in particular hospitals but also detention centres and 'people's courts', since 1999 have put to death a large but unknown number of Falun Gong prisoners of conscience. Their vital organs, including hearts, kidneys, livers and corneas, were virtually simultaneously seized involuntarily for sale at high prices...”

On January 31, 2007, they released an updated version of their report, which states: “Falun Gong practitioners in prison are systematically blood tested and physically examined. Yet, because they are also systematically tortured, this testing can not be motivated by concerns over their health.” (http://www.dafoh.org/evidence/matas-kilour-report/)

David Matas called such crime against humanity, “A new form of evil on this planet.”

“The Story of a Suitcase”