(Minghui.org) Editor's note: Falun Gong practitioners who participated in the events of April 25, 1999 cherish the memory of that historic day. On the 15 th anniversary of April 25, a practitioner writes about her experiences on that day.

After attending the morning group exercises on April 25, 1999, more than 10 practitioners from our practice site, including myself, headed to the State Council Appeals Office at around 6:00 a.m. We saw groups of two to three people along the way. We thought that they were probably all practitioners since they were going in the same direction.

We followed others and arrived at Fuyou Street at around 8:00 am. Many people were already there. The police politely asked us to stay on the curb on the east side of the street. The huge crowd of countless people formed three to five rows. Everyone stood there quietly and waited patiently.

Everyone took turns to stand in the first row so those in the back could rest. I was 61 years old at the time and everyone offered me their turn. I didn't feel tired at all so I stood in the front. We brought umbrellas that day because the forecast indicated a chance of rain. Yet the weather was very nice. It was sunny throughout the day, not too hot or too cold. I didn't feel thirsty or hungry and felt great.

We were later told that small vendors were selling beverages and food items, and also that restrooms were nearby. We went in groups and in an orderly manner. We picked up trash such as fruit peels, paper wrappers, and plastic bags along the way and put them in a trash bag. Even leaves and small rocks were picked up, and we cleaned the street. Some practitioners walked back and forth with bigger trash bags and helped consolidate all the trash.

When we talked, we talked quietly and sometimes relayed messages to one another. Everything was in order throughout the day and everybody did it voluntarily. Sometimes we just smiled at one another knowingly, without verbal communication. The police officers chatted with each other and seemed pretty relaxed. 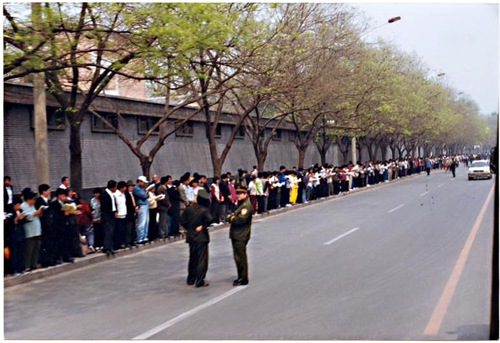 Peaceful appeal of over 10,000 Falun Gong practitioners on April 25, 1999. The practitioners waited quietly on Fuyou Street. Some were reading books.

We heard intermittent cheers from the crowd. What broke the silence? Many practitioners saw Falun of various sizes rotating at the entrance of the Appeals Office. Many non-practitioners also witnessed it. We were all very excited, as this was Master's encouragement. Even the sun became a large Falun, rotating in the sky in the afternoon. Practitioners present in the Liubukou area all saw it.

Some of practitioners were from Beijing, and others were from different areas or other provinces. I heard that some were from as far away as Chaoyang City in Liaoning Province. We heard waves of cheers that lasted quite a while. We felt that Master and the Gods were watching over us, encouraging us, and strengthening us, and we were so blessed and honored. I truly felt that Master and the Gods were there and protecting us.

Practitioners made three requests: To have the practitioners who were arrested in Tianjin released, to have a legitimate cultivation environment, and to lift the ban on Falun Gong books. All the practitioners there, including those from the Research Society, the ones who met with the premier first, and the rest of us who stood outside, had only those three simple wishes.

We waited until 9:00 p.m. and were told that Premier Zhu agreed to release the practitioners and expressed that the government was never opposed to Falun Gong. As soon as we heard the preliminary results, we all went home. We again checked the ground before leaving to make sure there was no trash left behind and headed in different directions without making much noise. It was very quiet and orderly.

It was an opportunity to cleanse the soul, and an experience that will be cherished for a lifetime.