(Minghui.org) In honor of the 15th anniversary of April 25th, Falun Dafa practitioners held a rally at Cheung Sha Wan Playground in Kowloon, Hong Kong, on April 20 and then marched through downtown.

Many councilors from the Pan-Democracy Camp and scholars attended the events to lend their support. Several legislators from Taiwan and Chinese rights activists expressed their support via pre-recorded speeches.

On April 25, 1999, more than 10,000 Falun Gong practitioners held a peaceful demonstration at Zhongnanhai, the central government compound, to ask the Tianjin Police Department to release the practitioners who had been arrested illegally.

Their reasonable and nonviolent request for the authorities to recognize their legal right to practice focused international attention on Falun Gong. On July 20 of that same year, then Chinese Communist Party (CCP) leader Jiang Zemin launched the persecution of Falun Gong.

The persecution continues to this day. Each year on April 25, practitioners around the world hold activities to commemorate this landmark event. 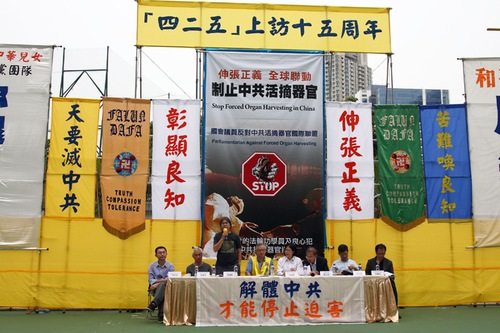 Hong Kong Falun Dafa practitioners gather at Cheung Sha Wan Playground in Kowloon on April 20, 2014, to remember the 15th anniversary of the April 25 appeal. Many councilors from the Pan-Democracy Camp and scholars came to support the activity. 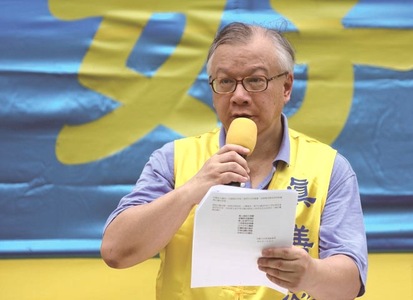 Kan Hung-Cheung, spokesperson for the Hong Kong Falun Dafa Association, said at the rally that Falun Gong practitioners have held onto their belief in Truthfulness-Compassion-Forbearance over the past 15 years. They have become more steadfast amidst the persecution.

“Only when the Chinese Communist Party (CCP) is disintegrated will the persecution of Falun Gong stop and the world become a better place. The 160 million Chinese people who have quit the CCP organizations are witnessing the disintegration of the CCP,” he said.

Appeal to the Chinese People

Attorney Theresa Chu of the Taiwan Falun Gong Human Rights Lawyers Organization announced at the rally the establishment of Parliamentarians Against Forced Organ Harvesting in Asia. She called upon all governments to:

The CCP’s Brutality Must Stop 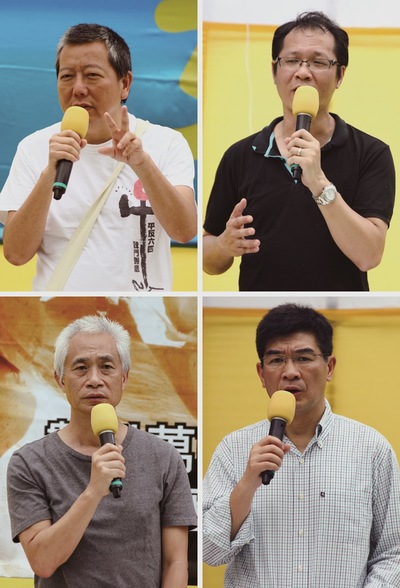 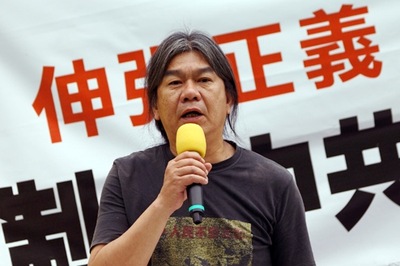 Leung Kwok-hung, member of the Legislative Council and founding member of the League of Social Democrats, attended the rally to support the effort to end the persecution.

Lee Cheuk-Yan, member of the Hong Kong Legislative Council and chairman of Hong Kong Alliance in Support of Patriotic Democratic Movements in China, said that “[Legislators in Taiwan and Hong Kong] feel that those with a conscience will not allow the CCP’s brutality to continue.”

“We will not allow a government to systematically harvest organs from the living and to use the practice to suppress dissidents,” said Leung Kwok-hung, member of the Legislative Council and founding member of the League of Social Democrats.

Mr. Li said that he often attended Falun Gong activities whenever he could although he wasn’t a practitioner. “The CCP is so evil that it has to persecute good people like Falun Gong practitioners,” said Mr. Li. “I read the Epoch Times every day and have already quit the CCP organizations.” Mr. Li often tells people he meets what the CCP is really like and the terrible things it did to persecute its people. “I support justice,” he said. 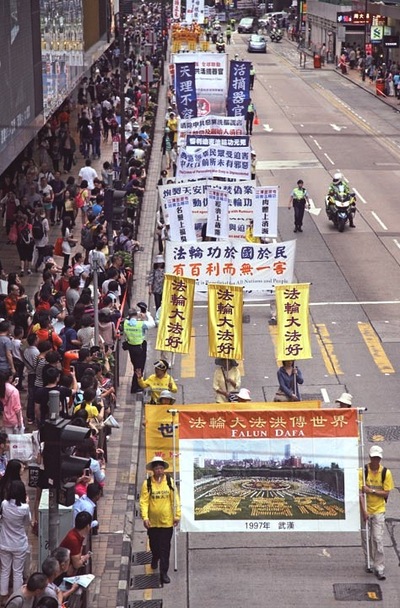 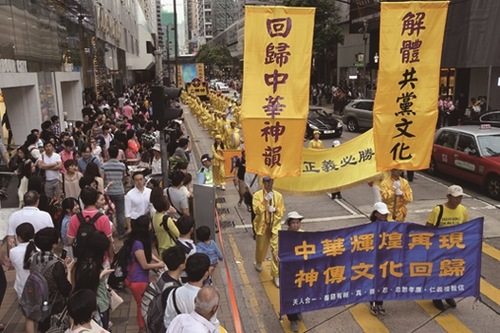 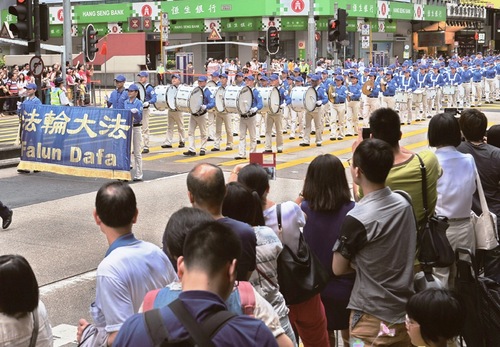 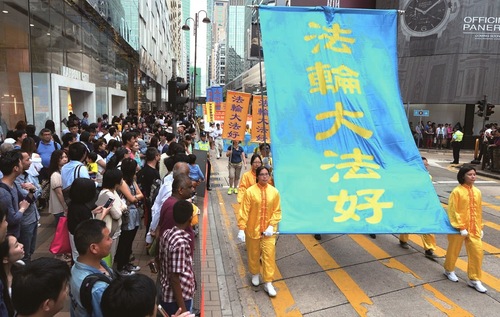 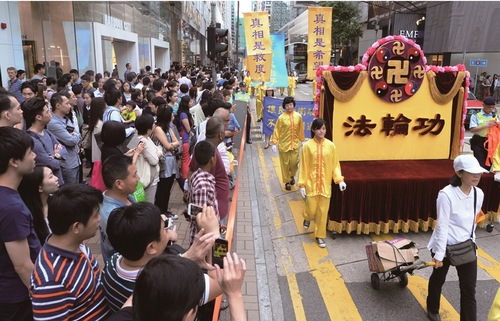 The grand parade made up of Falun Gong practitioners draws the attention of a large crowd. Many spectators take pictures and videos. 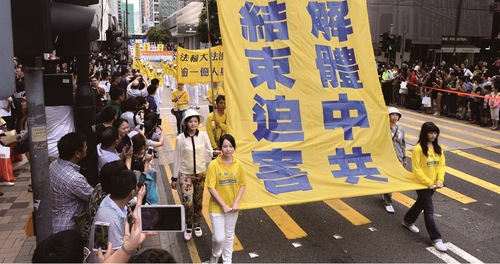 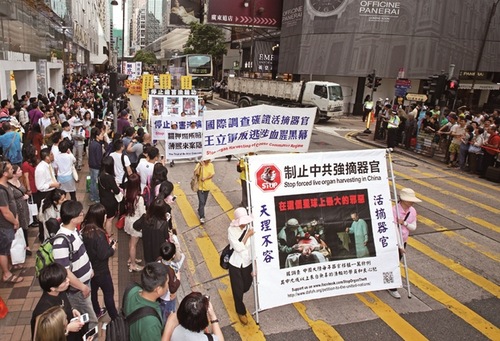 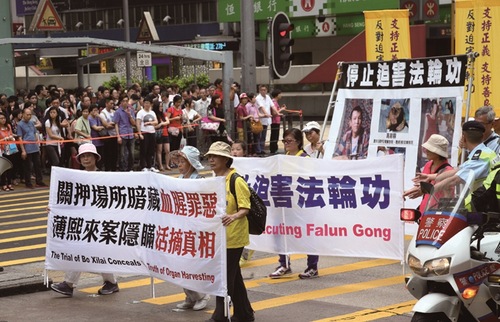 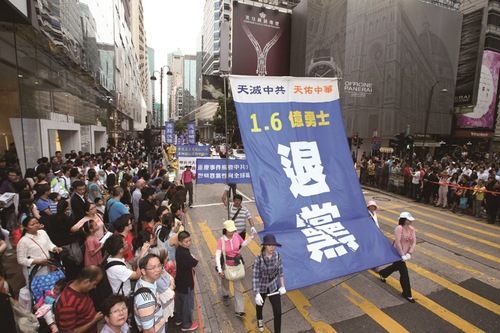 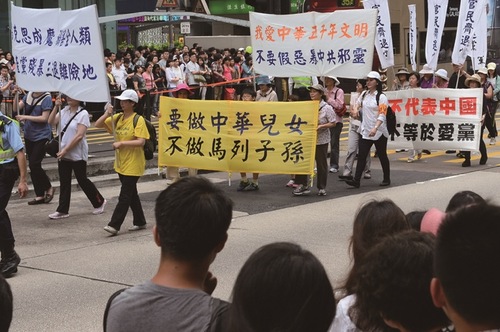 The banners encourage Chinese people to quit the CCP and its affiliated organizations, to stay safe and to eliminate the CCP.

After the rally, a grand march lead by practitioners' Divine Land Marching Band began at 2:00 p.m. From Cheung Sha Wan Playground, it went through downtown Kowloon and ended at Tsim Sha Tsui Ferry Pier. The parade lasted for three hours and attracted many tourists from China. Many of them took photos and videos. A lot of them, after understanding the facts about the CCP’s persecution of Falun Gong, chose to quit the CCP and its affiliated organizations.

“How I Learned to Acknowledge My Own Shortcomings and Cultivate Diligently”