(Minghui.org) As the anniversary of April 25 approaches, Falun Gong practitioners in Macao held activities on April 19 at the pedestrian zone near St. Dominic's Church to commemorate the landmark event 15 years ago. 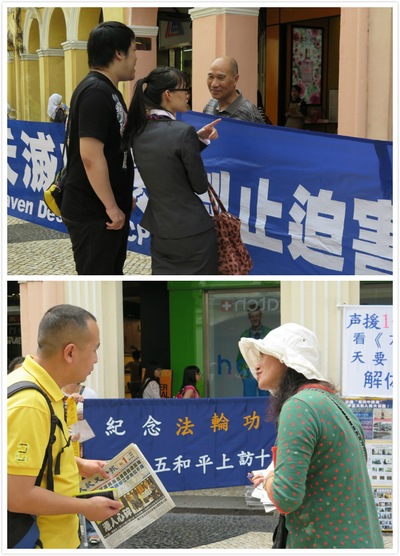 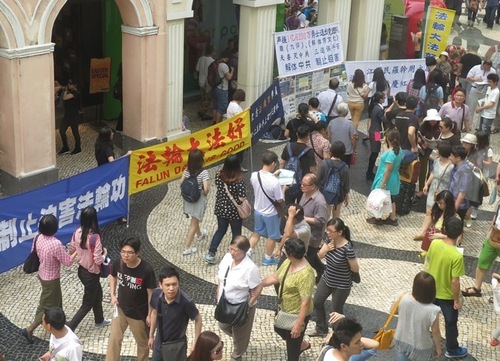 Practitioners in Macao held activities to commemorate the 15 th anniversary of April 25 at the pedestrian zone near St. Dominic's Church on April 19, 2014. 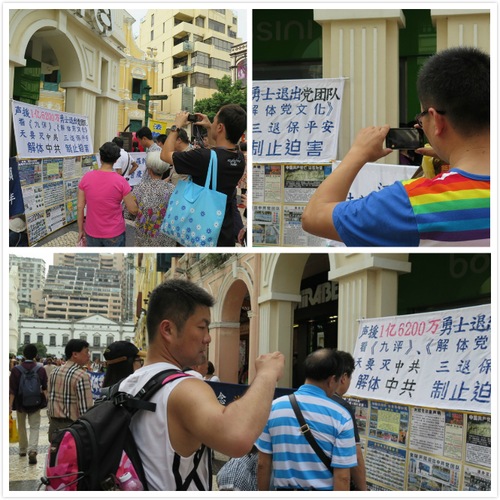 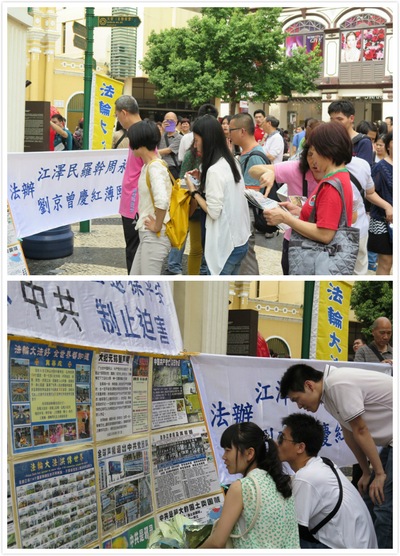 The tribute took place during a three-day public holiday, and the pedestrian zone was filled with tourists from all over the world, including mainland China. Starting at 1:45 p.m. practitioners erected banners that said: “Commemorating the 15 th Anniversary of the Peaceful April 25 Appeal,” “Stop Persecuting Falun Gong,” “Falun Dafa is Great,” and “Bring Jiang Zemin, Luo Gan, Zhou Yongkang, Liu Jing, Zeng Qinghong, Bo Xilai to Justice.”

The set-up and banners prompted many Chinese tourists to take pictures. Two young men from Dongguan City, Guangdong Province, said, “We cannot get information like this in the mainland.” After reading the poster about the April 25, 1999, peaceful appeal and learning the facts about the persecution, they quit the Communist Youth League and took software to circumvent the Internet censorship and get more information later.

A young girl from Zhuhai City, Guangdong Province, took many pictures of the posters. She said, “Macao is good - there is more freedom here.” She renounced her membership in the Youth League.

Over 200 Chinese tourists quit the Chinese Communist Party (CCP) and its affiliated organizations during the afternoon. Many took truth-clarification materials.

Every year, practitioners all over the world hold different events to commemorate the anniversary of April 25th. They have peacefully resisted the violent persecution over the past 15 years, and the historical significance of the April 25th appeal, which first focused international attention on Falun Gong, continues to grow.

“When We Cultivate Diligently, Master Can Turn the Tide”