(Minghui.org) Falun Gong practitioners in Singapore held a group exercise practice and signature collection event on April 15, 2014, in Hong Lim Park, to commemorate the 15th anniversary of the April 25 appeal. They explained the significance of the events that took place on April 25, 1999, when ten thousand Falun Gong practitioners peacefully petitioned the government, and exposed the Chinese Communist Party's (CCP) ongoing persecution of Falun Gong. Many visitors signed a petition condemning the Party's atrocity of harvesting organs from living Falun Gong practitioners.

Group practice in Singapore to commemorate the April 25th appeal 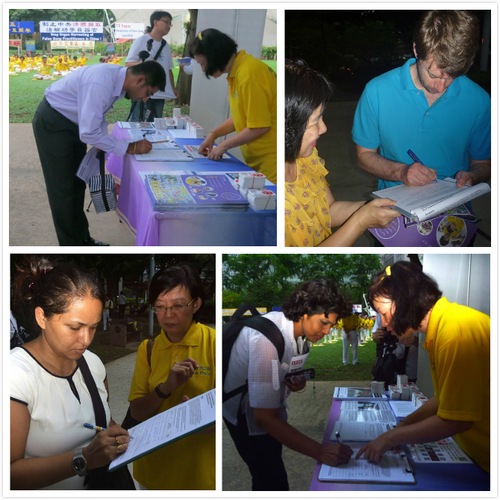 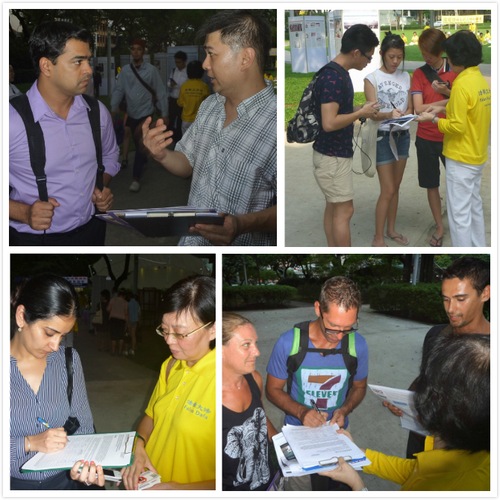 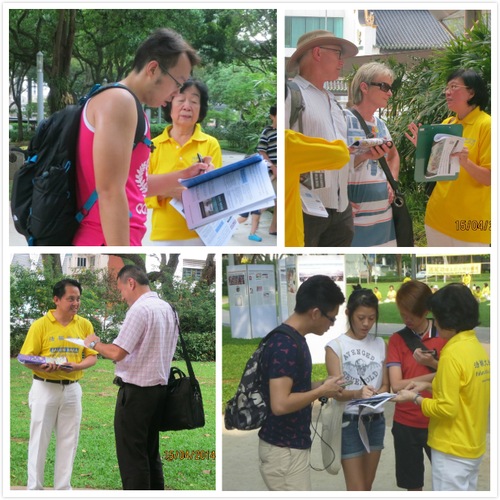 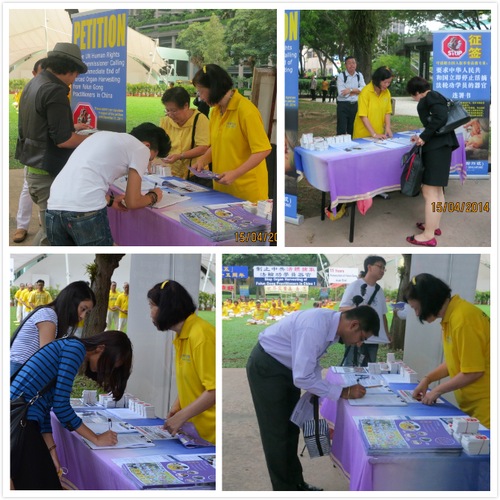 Among the crimes perpetrated during the 15-year persecution of Falun Gong, the most outrageous has been the regime's harvesting organs from living practitioners imprisoned in detention centers, prisons, and forced labor camps. Posters exposing the organ harvesting crimes were displayed during the event. The atrocities shocked many visitors, including local residents, tourists, students, and guest workers from India, Austria, England, the United States, China, Serbia, Russia, Cyprus, the Philippines, Sri Lanka, Myanmar, Mexico, Pakistan, and Poland. Many visitors signed the petition condemning the atrocities.

Many people stopped to watch the event, take photos, and talk with the practitioners. One visitor remarked with admiration, “So many are gathered here for conscience and justice!”

Friederike, who teaches history and English in Austria, was in Singapore with a tour group, and the Falun Gong exercise demonstration caught her attention. She said that she had read reports about Chinese forced labor camps, but this was the first time she had heard about the CCP organ harvesting atrocity.

Tommy, from the Philippines, is a 26-year-old information technology consultant. He had already heard about the persecution of Catholics in China, as he grew up in a Catholic family. Tommy said, “Live organ harvesting is absolutely wrong. It is a crime to kill people for exercising their beliefs. I hope that more people will learn about these crimes and that the United Nations will pay attention to this issue.”

“This is a truly peaceful event,” said Annshul, a software engineer from India, as he took in the practitioners' gathering. He expressed hope that more people could learn about the persecution, especially those who intend to go to China for organ transplantation surgery.

According to several sources within the Chinese government, in the months following the April 25th gathering, a fierce political struggle ensued within the top levels of the CCP brass. Then-CCP head Jiang Zemin called upon the government to "crush" Falun Gong, while other members of the Politburo saw no threat in the practice. CNN's senior analyst Willy Lam quoted senior officials saying the suppression of Falun Gong became very "personal" for Jiang Zemin. In July, Jiang formally ordered the suppression of Falun Gong. The April 25th gathering was quickly re-characterized—not as the peaceful appeal it was, and one that, in fact, was coordinated by Tianjin and Beijing officials themselves, who told practitioners to go to the Beijing appeals office—but rather as "laying siege" to the central government compound and clear "evidence" as to how Falun Gong is a threat.

The misrepresentation of April 25th as a "siege" of the central government compound politicized Falun Gong, both in China and abroad. Thus, rather than seeing the CCP's persecution as the violent suppression of a religious minority, a narrative claiming that Falun Gong and the CCP were vying for power began to evolve. Furthermore, some China watchers in the West believed that Falun Gong brought the persecution on themselves by "challenging" the government on April 25th. This narrative has eroded the enthusiasm of many would-be supporters of human and religious rights, and remains the single greatest factor in the blame-the-victim phenomena that surrounds the investigation of and reporting on the persecution of Falun Gong more broadly.

Over the last 15 years of persecution, more than 3,700 practitioners have died as a direct result of persecution, often under torture or horrific conditions in detention. Sadly, the number of death cases is likely much higher, but due to the regime's information blockade, it is very difficult to get news out of China. The brutal persecution is still ongoing.