(Minghui.org) Today's news from China includes incidents of persecution that took place in 9 cities or counties in 7 provinces. According to this report, 9 Falun Gong practitioners were subjected to mistreatment during their detention, and at least 8 practitioners were illegally arrested . 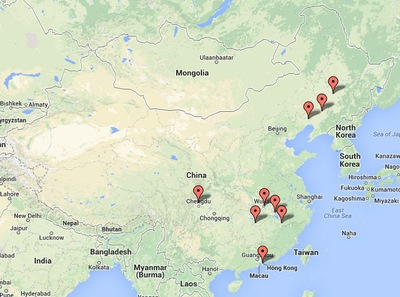 Hou Guochen, a Chinese Communist Party (CCP) secretary from Xiaoerfang Village, Dagujiazi Town, along with other officers, went to the homes of Mr. Liu Guojie and Ms. Wu Qiuju, and harassed them on the afternoon of April 5, 2014. They told the practitioners that if anyone from Shenyang City came to ask whether they still practiced Falun Gong, they should answer no, otherwise they would be arrested.

Ms. Cheng Laihua from the Yuehu District, and her young son were arrested by officers from the Zhongtong Police Station on the afternoon of April 5, 2014, while they were distributing Falun Gong informational materials in Zhongtong Township, Yujiang County. Ms. Cheng was taken to the Yujiang County Detention Center. The next day, Chen Haifeng, deputy head of the Yujiang County Domestic Security Division, and other officers went to Ms. Cheng's home and ransacked it. They took her Falun Gong informational materials and DVDs.

Ms. Gao Lizhen was arrested about five or six months ago.

Ms. Zhao Lingyan was arrested on April 7, 2014. She is being held in the Jinzhou City Detention Center.

Ms. Fu Guihua and Ms. Sun Yanxia were arrested by officers from the Nongan County Domestic Security Division. Their families negotiated with the Nongan County Police Department, demanding the practitioners' release. The police arrested a few of the family members on April 8, 2014. Ms. Fu's daughters, Huanhuan and Yanzi, and her younger sister, were not allowed to leave the police department.

Ms. Huang Shuqiong, Ms. Cai Tongfeng, Ms. Zhou Guoxian, Ms. Guo Shunqun, and Ms. He Mingjing were arrested on the morning of April 2, 2014, for telling people about Falun Gong in Chaoyang Village. Xia Chengshu, director of the Junyue Town Police Station, and other officers made the arrests. The police later went to Ms. Huang's home and ransacked it. The officers confiscated Falun Dafa books and informational materials.

Ms. Cai, Ms. Zhou and Ms. Guo were taken to the Pengzhou City Detention Center that afternoon. At around 10:00 p.m. all five practitioners were released from the detention center and the police station.

About twelve officers from the Changsha Domestic Security Division and the Zuojiatang Police Station broke into Ms. Zhou Deyuan's home on the afternoon of March 29, 2014. Ms. Zhou, 61, was not home at the time. The officers took two computers, two printers, along with Falun Dafa books and informational materials.

Ms. Zhou was arrested with she returned home at around five or six o'clock. She is currently being held in the Changsha City No. 4 Detention Center.

On February 20, 2014, Ms. Yang Yumei from the Lushan District was arrested for the third time. Her home was ransacked.

Ms. Yang's computer was confiscated when she was arrested the first time. She was released after being extorted of about 12,000 yuan.

She was detained for 13 days after her second arrest.