(Minghui.org) Today's news from China includes incidents of persecution that took place in 12 cities or counties in 9 provinces. According to this report, 6 Falun Gong practitioners were subjected to mistreatment during their detention, and at least 23 practitioners were illegally arrested . 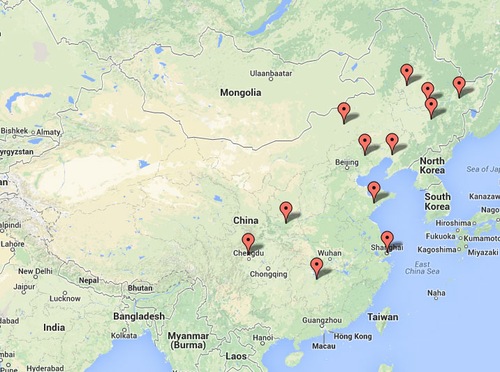 Ms. Liu Guirong, 70, was arrested by police officer Song Zhansheng while she told people about Falun Gong on April 1, 2014.

Ms. Zhao Guirong was arrested by officers from the Wenlin Road Police Station on the afternoon of April 6, 2014 while she distributed Shen Yun Performing Arts DVDs on Wenlin Road.

Ms. Huang Shuqiong, in her 70s, was arrested recently and her home was ransacked.

Ms. Zhang Xuezhu, in her 60s, from Wuhan City, Hubei Province, was arrested while posting Falun Gong informational materials in the Pudong area, Shanghai, on April 3, 2014.

Ms. Gong Haiou was arrested by officers from the Jianhua District Police Department on April 3, 2014.

Mr. Zhou Shaotang and other practitioners, from Yintun Village, Dongguo Town, were arrested by officers from the Shixin Town Police Station while talking to others about Falun Gong in Shixin Town on March 14, 2014. After the police extorted money from his son, Mr. Zhou was released.

Mr. Tian Yong and another practitioner, from Qiqihar City, Heilongjiang Province, were arrested in Inner Mongolia on April 1, 2014. They were taken back by personnel from the Wulong Police Station of Qiqihar City. Mr. Tian Yong suffered numerous fractures in his cervical and thoracic spine, and several fingers as a result of brutal torture. His head was also severely injured. Mr. Tian remains unconscious in the Qiqihar City No. 1 Hospital. The other practitioner is held in the Qiqihar City Detention Center.

“Why Are Chengguan Court Officials So Afraid of Ms. Han Zhongcui's Sister, an Illiterate Farmer?”