(Minghui.org) Is it enough just to escape incarceration in China? One Falun Gong practitioner in Xichang City, Sichuan Province, does not think so.

Ms. Zhang Yi recently appealed to the Xichang City Procuratorate regarding the verdict handed down at her June 2009 trial: "Guilty, punishment waived." Her stance: “There is nothing wrong with practicing Truthfulness-Compassion-Forbearance. I should be acquitted of all charges.”

In her March 12 appeal, she asked to be reimbursed a year's worth of bonuses withheld from her. Based on the State Compensation Law of the People's Republic of China, she also requested additional compensation for the financial losses and mental injuries incurred by her and her family due to her being illegally arrested and detained for 11 months.

She also demanded the return of the computer, DVDs, books, cell phone, and other personal belongings taken from her home and a public apology from the authorities.

The verdict cited her four arrests as her “criminal record,” even though she was tortured each time, including being severely beaten, hung up with her hands shackled behind her back, force-fed, deprived of sleep, and injected with unknown substances.

In October 1999, four practitioners and I went to Beijing to appeal for Falun Gong, but we were arrested and detained for 26 days by the Beijing Domestic Security Division.

On September 6, 2002, practitioners all over China were arrested. I was arrested in Panzhihua City, Sichuan Province. The police took my Dafa books, truth-clarification materials, my jewelry, and 2000 yuan in cash.

I was secretly taken to the Yanbian County Detention Center in Panzhihua City, where I was interrogated and tortured. Eight police officers took turns in three shifts to interrogate me.

They bound my hands behind my back with nylon rope, then hung me up from the window bars. Only the tips of my toes touched the floor. My entire body weight was on my arms, which hurt terribly. If I moved even a little, the ropes got tighter. I sweat profusely. 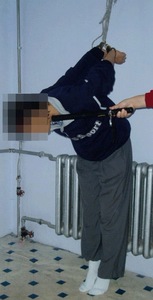 Torture reenactment: Hung up with hands shackled behind the back

They tortured me like this intermittently for two weeks. Once they left me like this for 24 hours. I was also deprived of sleep and food for three days and two nights.

In December 2002, the Panzhihua City 610 Office sentenced me to 2.5 years of forced labor and transferred me to Nanmusi Women's Forced Labor Camp. There, life was as harsh as the words of team lead Li Qi: “If you want to live, I will make you miserable. If you want to die, I will make it impossible, unless you 'transform.'”

Restrictions of basic needs became a means of torture in the camp. I was only allowed to go to the restroom twice a day. Each time I had to call myself “prisoner” to gain permission.

I was not allowed to take showers. The longest time I had to endure was almost two months. In addition, guards instructed prisoners to make fun of the fact that I smelled bad. I was forced to stand or sit still for long periods of time. When I was finally allowed to move, I couldn't even walk. Once they forced me to stand still every day for an entire week. After that, I couldn't urinate when I squatted down.

The mental torture was even worse. In order to force me to give up my belief, they tricked me, threatened me, and tried everything they could think of to “transform” me.

Division head Liu and Li Qi instructed prisoners to handcuff me to a window frame for an entire day and night. For the next four days, I was deprived of sleep. Two prisoners took turns watching me to prevent me from falling asleep. 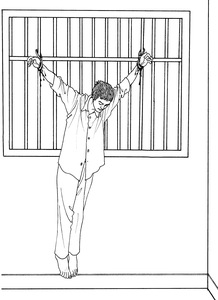 When I went on a hunger strike to protest the persecution, they force-fed me. The guards instructed prisoners to use thicker tubes. They held me down on the bed and cuffed my hands and feet, clenched my head and my mouth, then inserted a tube as thick as a finger into my stomach. I wanted to vomit but couldn't. It felt horrible. They put food and unknown drug into the tube. 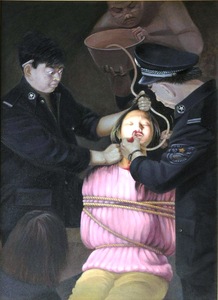 On October 13, 2007, when I was distributing truth-clarification DVDs near the Ningyuan Bridge, the police arrested me and detained me for 37 days.

On July 13, 2008, right before the Olympic Games, police from the Domestic Security Division arrested me on a charge of “participating in activities promoting Falun Gong.”

I came across the police arresting some elderly practitioners. I couldn't bear seeing them being treated like that, so I tried to reason with the police and urged them to release them. They arrested me, too.

I was detained for 11 months. The hardships I endured there is beyond words. In June 2009, the city Procuratorate released me with an “exemption from punishment” verdict. I refuse to settle. I deserve an unconditional release.