Evidence Proves That “Self-Immolation” on Tiananmen Square Was a Hoax

(Minghui.org) On January 23, 2001, five individuals allegedly set themselves on fire in Tiananmen Square in Beijing. The entire scene was caught on camera from multiple angles. In merely hours after the event, the Chinese regime's state-controlled media pumped out reports claiming the self-immolators to be Falun Gong practitioners. These reports included grisly footage of the victims and portrayed Falun Gong teachings as directly responsible for the tragedy.

Jiang Zemin's regime utilized the video to incite hatred toward Falun Gong in China and around the world, thus attempting to justify its brutal persecution of Falun Gong practitioners. However, an objective analysis of the seven-minute video revealed undisputable evidence that the alleged self-immolation was in fact staged by the regime itself, to be used as vile propaganda against Falun Gong.

On January 7, 2014, after 13 years of house arrest, two of the alleged self-immolators unexpectedly appeared at a press conference in New York. There, Chinese tycoon Chen Guangbiao, who had previously announced his desire to buy The New York Times , attempted to solicit donations for surgery to assist the disfigured Chen Guo and her mother.

The timing of this press conference suspiciously aligned to be right after two chief perpetrators in the persecution of Falun Gong, Zhou Yongkang and Li Dongsheng, had been arrested in China.

The following evidence proves that the so-called “Tiananmen Square self-immolation” incident was a highly orchestrated hoax, organized by the Chinese regime to defame Falun Gong:

Mounting testimonies indicate that police from the Domestic Security Division and 610 Office had received an “emergency notice” about the self-immolation before it happened. For example, the director of one city's Domestic Security Division said smugly, “We had known about it two days ahead of time.” How could anyone know of a self-immolation ahead of time?

2. Where Did the Firefighting Equipment Come From?

The Beijing Evening News r eported on February 16, 2001, that “there were 3 or 4 police officers putting out the fire per each self-immolator.” Altogether, they had about 25 pieces of firefighting equipment on the scene.

3. A Surveillance Camera That Pans and Zooms by Itself?

There is no doubt that Tiananmen Square has its fair share of surveillance cameras. However, regardless of how many there are, each surveillance camera is fixed to monitor from a set angle; the cameras don't move. In the video footage of the self-immolation hoax, the camera appears to pan and follow the police to the site where the fire began. Furthermore, it zooms in and out to catch all details of the drama as it unfolds.

The Chinese media claimed that it was a CNN journalist who had recorded the close-up shots. CNN’s chief news executive, Eason Jordan, stated: “The footage used in the Chinese television reports could not have come from a CNN videotape because the CNN cameraman was arrested almost immediately after the incident began.” Thus, CNN did not have a chance to shoot any footage.

A closer look reveals that after being on fire, Wang’s hair is still relatively intact as well. Hair burns quickly and should have been one of the first things to burn.

A policeman held a fire blanket but did not put it on Wang until Wang finished shouting slogans. 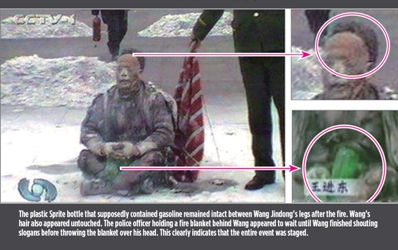 5. Wang Jindong Not in Pain, Couldn't Form the Most Basic Falun Gong Position

Being on fire didn't seem to bring Wang Jindong any pain. He just calmly sat on the ground. His vocal cords were not damaged either, in spite of the incredibly high temperature of the gasoline-induced fire: Loudly and clearly, he shouted a statement that has no basis in Falun Gong.

The Chinese media reported that Wang had been practicing Falun Gong since 1996. However, he failed to correctly form the most basic hand position (called “Jie Yin”) used in all Falun Gong exercises.

As this is the first position in every exercise, all Falun Gong practitioners learn to form the Jie Yin position correctly as soon as they take up the practice. This position requires one to slightly touch the tips of both thumbs together. However, Wang overlapped his thumbs in a completely incorrect manner. 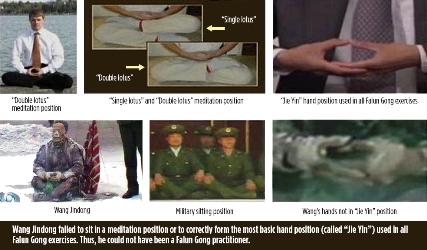 Analysis of a slow-motion sequence from the Chinese Central TV (CCTV) video also reveals that Liu received a sharp blow to the forehead during the alleged self-immolation incident. The blow with what looks like a metal bar appears to have been delivered by a man wearing a military coat. 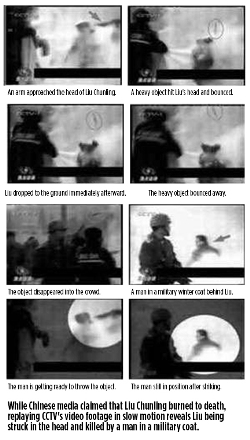 7. Tracheotomy Patient Speaks with Ease, But Suddenly Dies after Recovery

A patient who has tracheotomy is unable to breathe through the mouth. The air cannot reach the vocal cords and the larynx, so the patient cannot speak. It takes an adult patient about three months to recover and be able to speak again.

Liu Siying, a little girl participating in the alleged self-immolation, was reported to be in critical condition after the fire. Her trachea was cut open, yet she could sing and talk with the interviewers loudly and clearly only four days later. This is medically impossible.

Siying died suddenly on March 17, 2001, just as she was ready to be discharged from the hospital. Among the people accused of self-immolation, Liu Siying was the most likely to divulge that it was a hoax because she was so young. The only way to guarantee her silence, and prevent the truth from coming out, was to kill her.

8. Half a Bottle of Gasoline Couldn't Hurt Liu Baorong

Another “self-immolator,” Liu Baorong, was never mentioned in the regime's first news report about the incident, and there is no footage to show she was on Tiananmen Square. She claimed that she was preparing to self-immolate but changed her mind at the last minute upon seeing the others burning.

In a video interview, Liu stated, “I drank about half a bottle of gasoline and wanted to pour the rest on my body.”

Drinking one-tenth of an ounce of gasoline per pound of body weight will cause death. For someone of Liu’s weight, half a bottle of gasoline would surely kill her.

This was in stark contrast to the way news is usually handled in China, where the information must cascade through multiple levels of approval—from lower-level officials to their superiors—until in the end, the top officials allow the news to be reported.

Manuscripts of sensitive news stories to be aired by the Xinhua News Agency must be reviewed, and usually redrafted, many times. In this instance, however, the story made it to the public in an unprecedented time, arousing suspicion from the start.