(Minghui.org) A detainee in Division 7 of the Liaoning Women's Prison had chest pain, so she asked the guards if she could see a doctor. The guards ignored her, and her situation worsened day by day. She ended up dying on the way to the prison hospital.

A detainee in Division 1 was not sent to the prison hospital until she was seriously ill. While sitting in a chair waiting for a doctor, she said, “I am so tired,” and with those final words, she tragically died in the chair.

That's just two out of the 5,000 or so detainees at the Liaoning Province Women’s Prison. Falun Gong practitioners make up the majority of the prison population, and 60% of all detainees are serving terms of more than ten years. Through intensive forced labor, the slave-like efforts of wrongly imprisoned Falun Gong practitioners allow corrupt authorities to reap huge illicit profits from the prisoners in their charge.

The report below explains the prison's use of exploitation. The first section describes the workings after one is admitted. The second section focuses on slave labor. 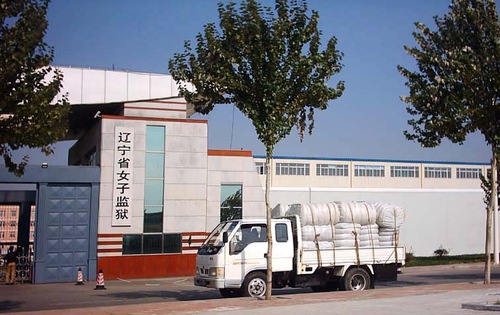 Exterior of the Liaoning Women's Prison. A truck with raw materials for slave labor production is parked at the entrance. The picture was taken in October 2005.

1. Arrival at the Prison

After being admitted, the prisoners spend their first month in the Admission Division. There, they work hard during the week to make money for the prison, and recite prison rules on Sundays. Practitioners are also forced to buy their daily amenities through the inmate-in-charge, with such purchases usually costing about 500 yuan. The specific price of each item is intentionally left ambiguous.

Other than a prison uniform and a pair of shoes, all necessities can be only purchased at the detainee’s expense. Upon leaving the prison however, the uniform must be returned so it can be resold to the next round of detainees.

Mattresses and bedding are also not provided.

After one month, the detainees are separated into individual divisions. Guards inspect items and discard anything they consider “inappropriate.” Based on prison guidelines, these items should be returned to the detainees' families. But if the guards do not feel like doing so, they simply throw away the items instead.

The bed consists of a wood frame, and one has to buy a mattress and blanket, which together cost about 600-700 yuan. Other items include pajamas, normally priced at 220 yuan. (Average quality pajamas cost less than 100 yuan in the open market.) According to prison guidelines, these items should be provided by prison officials at no cost.

At the time of one's release, prison officials will take back these items so that they can be resold to new detainees.

Prison officials not only receive kickbacks from vendors for the low quality merchandise they peddle to prisoners, they also charge highly inflated prices. The mandatory purchases are called “donations.” Any prisoners with money in their accounts have no choice but to purchase merchandise as dictated by the prison officials. Such merchandise is not for individual use, but for the prison.

The prison guidelines restrict working time for detainees to no more than eight hours per day, and overtime is supposed to be reimbursed with extra pay. But guards in the prison do not follow these rules.

The Liaoning Women’s Prison has its own working schedule of 7:00 a.m. to 7:00 p.m., six days a week, except for Sunday. This established schedule clearly violates prison guidelines, but the actual work time is actually longer that this in all prison divisions.

For example, after Zheng Chunyan was appointed as production manager in Division 7, the working hours increased, often from 6:00 a.m. to 9:00 p.m. She often required detainees to work on Sunday as well.

Such exploitation was not rare, and overall about one-half of all Sundays were arranged for something else, with no rest. When one practitioner asked officer Xu Xiaoming about these working conditions, Xu not only shirked responsibility, but retaliated with further mistreatment.

The extended working hours bring extra profits for officials. For example, by having shorter times for meal and bathroom use, each detainee works upwards of 12 hours each day, which adds up very quickly. When work on Sundays is taken into account, as well as extra assignments in the cell, the actual work week is closer to 80 hours.

Perhaps more inconceivable than the heavy workload, is that detainees are forced to practice and rehearse dances and songs to thank the prison officials.

To maximize productivity and increase profits, officials set the daily workload based on the quickest detainee. Therefore, most people are unable to finish the work on time, resulting in various types of punishment, including having meals reduced, forced standing or squatting for long periods of time, or having one's bedding taken away.

Nearly 500 detainees are held in Division 7 alone, and they produce various famous name-brand clothing. The annual profit is more than 30 million yuan, equaling about 60,000 yuan per detainee.

In contrast, each detainee only receives 38 yuan per month, or 460 yuan per year, less than 1% of the profit generated.

Detainees also must pay for their own medical treatment, even when the injuries result from slave labor. After Xiao Yan (alias) injured her finger while operating a machine in 2005, she went to hospital and ended up owing the prison 2,000 yuan. Because her pay at that time was only 7.5 yuan per month, she had no choice but to go without any pay month after month. Even when her son sent her 200 yuan of his own money, the money was deducted by prison officials. The debt was not paid off until 2012.

The clothing processing work environment is filled with dust. Sometimes the tailors and the machine operators will have their faces covered in dust. Despite the health risk, prison officials provide hardly any personal protection equipment. Furthermore, such equipment may not be available even if detainees want to purchase it.

Once when preparing for an inspection, guards gave each person a dust filter mask to protect their lungs. After the inspection, however, guards took the masks back to use them during the next inspection.

Besides the dust, tailoring with electric scissors is dangerous. With 12-hour days, any distraction could lead to injury or loss of fingers. Because such injury reduces productivity, which in turn affects profits, officials later began providing gloves for finger protection.

Working Until the Last Breath

There are many other cases of detainees being badly mistreated and their poor health being ignored.

Practitioner Ms. Sun Li developed severe heart disease as a result of torture, and she could hardly walk. Guard Liu Xiaoyan arranged several of the prison's most vicious inmates to monitor her. They swore at her every day, and Ms. Sun's health deteriorated.

One day, her heart problems recurred and she was taken to the hospital. On the way back to the prison, she was too weak to walk. When another inmate offered to push her in a wheelchair, Liu stopped the inmate and said, “Let her walk herself!”

Ms. Sun once went to a hospital outside the prison, and the doctor gave her an instrument so she could monitor her heart around the clock. However, despite the obvious severity of Ms. Sun's heart condition, Liu ordered, “Go back to work.”

Practitioner Ms. Shi Wei was diagnosed with lumbar muscle degeneration, which in reality was a lumbar disc protrusion. Upon hearing the diagnosis, Liu said to Ms. Shi right away, “Go back to work.”