(Minghui.org) Works of artists who practice Falun Gong recently sparked interest during an exhibition in Odessa, Ukraine. The local TV station aired an in-depth interview about the artworks during the ten-day art exhibition, which concluded on November 29, 2014.

The TV program explored the artists' inspirations and related contemporary issues in China, Ukraine, and the rest of the world. The anchor complimented the exhibition organizers for running a very important and necessary event.

According to Svetlana, one of the event organizers, many visitors, especially children, enjoyed viewing the paintings, and many noticed and commented on the warmth and energy the pieces carry.

The exhibition in Odessa was one of the 22 held in Ukraine since its first in 2008, according to Alexandria, the other event organizer at the interview. 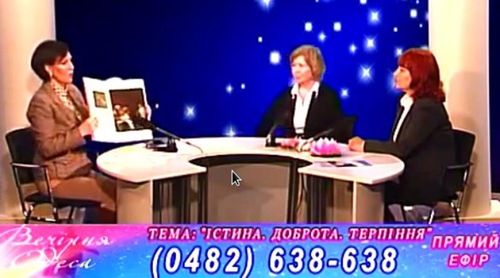 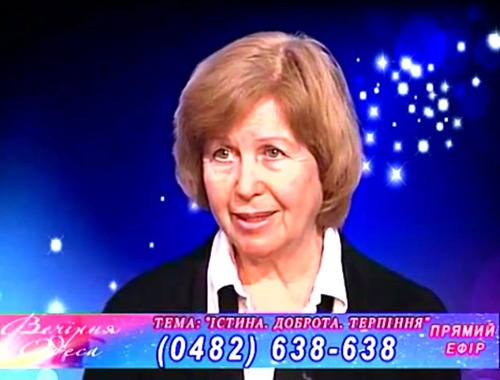 Alexandria, one of the organizers of the art exhibition

Some of the 40 paintings on display portrayed Falun Gong practitioners being ruthlessly tortured for upholding their beliefs in Truthfulness-Compassion-Forbearance.

“There have been serious human rights abuses in China,” said Alexandria. “Prior to 1999 [when the CCP started a nationwide persecution campaign against Falun Gong], more than one hundred million people were practicing Falun Dafa [also known as Falun Gong],” she said.

In response to a question about whether it was necessary to portray the brutal tortures in the paintings, Alexandria said, “The torture depictions are necessary. They were presented in such a way that they didn't promote what was evil, but inspired kindness.

“I've got two guest books in which visitors wrote down their feedback. Many said that viewing these paintings [that depicted tortures] struck a chord with them. They are more sympathetic, compassionate, and aware of our shared responsibility.”

The anchor said that the theme of the artworks was related to Ukrainian history, because Ukraine experienced great famine and political persecution in history, which caused the deaths of 3-7 million people. The specific death toll is still unclear to this day. To avoid the repeat of these tragedies, people should know how to respond. The art exhibition provides one feasible solution.

The program also broadcast interviews of artists whose works were featured in the exhibition, including Professor Zhang Kunlun, Chen Xiaoping, and Kathleen Gillis.

Alexandria said that the art exhibition got its name because it features works from artists in many countries. They share something in common, their belief in Falun Gong and the principles of Truthfulness-Compassion-Forbearance.

She pointed out that the paintings were unique, as they incorporate influences of different cultures and the shared belief drawn from one of the world's oldest civilizations. The content of the paintings are also unique, she said.

According to her, many visitors listened to the tour guides for hours. Every painting has a story behind it. The cultivators—Falun Gong practitioner artists—inject in their work their special energy and compassion, which the visitors noticed and enjoyed.

“On the Issue of Respecting Master and Dafa”